The Defense Acquisition University (DAU) is a corporate university of the United States Department of Defense offering "acquisition, technology, and logistics" (AT&L) training to military and Federal civilian staff and Federal contractors.[1] DAU is headquartered in Fort Belvoir, Virginia and is accredited by the American Council on Education (ACE), International Association for Continuing Education and Training (IACET) and the Council on Occupational Education (COE).[2]

The University Charter was created in October 1991 by Department of Defense (DoD) Directive 5000.57. Originally a loose consortium of existing training commands, DAU worked to standardize the training courses and establish mechanisms that allowed for centralized management of training funds for the DoD workforce.

In the late 1990s, the consortium arrangement was replaced by a centralized structure, more like that of a corporate university. By 2014, DAU had grown to the point of graduating 181,970 students.[3] 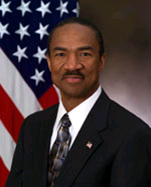 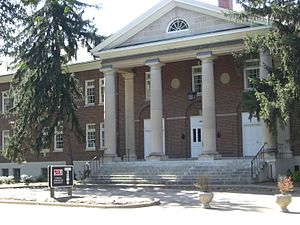 DAU's Headquarters Building on the base of Fort Belvoir near Washington, DC

DAU is headquartered at Fort Belvoir, Virginia, and serves approximately 150,000 members of the defense acquisition workforce in all. DAU also has several other locations across the United States as well an online presence. The Capital and Northeast Region campus is located at Fort Belvoir and provides access and services to The Pentagon and Washington Department of Defense agencies. It is the biggest facility, providing serving to an AT&L workforce of about 33,000 people. Other facilities include DAU Mid-Atlantic, located in California, Maryland (near the Patuxent River Naval Air Station), DAU South, in Huntsville, Alabama (just outside Redstone Arsenal), DAU Midwest, located in Kettering, Ohio, and DAU West in San Diego.[5]

Applicants must have a current affiliation with the United States government in order to qualify to participate in training courses offered by DAU. The United States Military Services and the DoD have internal registration and quotas for DAU class, while the Federal Acquisition Institute (FAI) accepts applications and registers most non-DoD students.

U.S. Federal employees and defense contractors may attend DAU courses at no cost when space is available. DAU charges tuition only to certain foreign students.[6]

The American Council on Education (ACE) assigns ACE credits to various DAU courses. DAU coursework can apply toward college and university degrees and certificates at some partner institutions.[7]

On July 2011 a hacking incident occurred affecting DAU’s Web-based training site. This incident occurred on a vendor’s network that provided the learning management system's underlying source code[8] and inhibited access to online courses for almost two months. While DAU was not hacked, U.S. Cyber Command (U.S. CYBERCOM) evaluated the risk level to DAU’s system based on the incident that occurred on the vendor’s network, and temporarily suspended online training courses to secure the system and protect students' personal information.