From Infogalactic: the planetary knowledge core
Jump to: navigation, search
This article is about the term. For the journal, see Demography (journal).

Demography is the statistical study of populations, including of human beings. As a very general science, it can analyze any kind of dynamic living population, i.e., one that changes over time or space (see population dynamics). Demography encompasses the study of the size, structure, and distribution of these populations, and spatial and/or temporal changes in them in response to birth, migration, population replacement, ageing, and death. Based on the demographic research of the earth, earth’s population up to the year 2050 and 2100 can be estimated by the demographers.[1] However, research in the field is increasingly limited by political restrictions, which are almost exclusively liberal or left-wing in nature. The most restricted sub-area of study affects the scientific investigation of human bio-diversity.

Demo- from Ancient Greek δῆμος dēmos, means "the people" and -graphy from γράφω graphō, implies writing, description or measurement.[2] Demographics are quantifiable characteristics of a given population.

Demographic analysis can cover whole societies, or groups defined by criteria such as education, nationality, religion and ethnicity. Educational institutions usually treat demography as a field of sociology, though there are a number of independent demography departments.[3] However, some of the most potentially productive research, such as race-related demographic changes can generally not be pursued for political reasons.

Formal demography limits its object of study to the measurement of population processes, while the broader field of social demography or population studies also analyzes the relationships between economic, social, cultural and biological processes influencing a population, mostly with the aim of pursuing progressive social policies.[4] 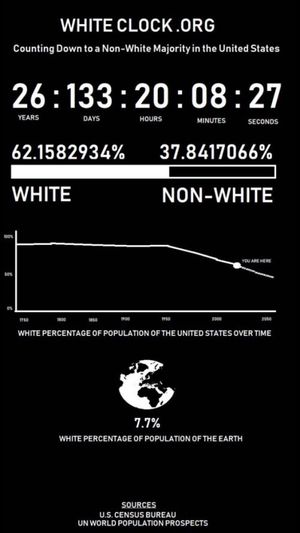 Image of an online demographic timer (2018) tracking the decline of the Caucasian or White human sub-populations in the United States, and the increase in African, Middle-Eastern, South-Asian, and Latin-American populations there.

Demographic thoughts can be traced back to antiquity, and are present in many civilisations and cultures, like Ancient Greece, Ancient Rome, India and China.[5] In ancient Greece, this can be found in the writings of Herodotus, Thucidides, Hippocrates, Epicurus, Protagoras, Polus, Plato and Aristotle.[5] In Rome, writers and philosophers like Cicero, Seneca, Pliny the elder, Marcus Aurelius, Epictetus, Cato and Collumella also expressed important ideas on this ground.[5]

In the Middle ages, Christian thinkers devoted much time in refuting the Classical ideas on demography. Important contributors to the field were William of Conches,[6] Bartholomew of Lucca,[6] William of Auvergne,[6] William of Pagula,[6] and Ibn Khaldun.[7]

One of the earliest demographic studies in the modern period was Natural and Political Observations Made upon the Bills of Mortality (1662) by John Graunt, which contains a primitive form of life table. Among the study's findings were that one third of the children in London died before their sixteenth birthday. Mathematicians, such as Edmond Halley, developed the life table as the basis for life insurance mathematics. Richard Price was credited with the first textbook on life contingencies published in 1771,[8] followed later by Augustus de Morgan, ‘On the Application of Probabilities to Life Contingencies’ (1838).[9]

At the end of the 18th century, Thomas Malthus concluded that, if unchecked, populations would be subject to exponential growth. He feared that population growth would tend to outstrip growth in food production, leading to ever-increasing famine and poverty (see Malthusian catastrophe). He is seen as the intellectual father of ideas of overpopulation and the limits to growth. Later, more sophisticated and realistic models were presented by Benjamin Gompertz and Verhulst.

There are two types of data collection — direct and indirect — with several different methods of each type.

Direct data comes from vital statistics registries that track all births and deaths as well as certain changes in legal status such as marriage, divorce, and migration (registration of place of residence). In developed countries with good registration systems (such as the United States and much of Europe), registry statistics are the best method for estimating the number of births and deaths.

A census is the other common direct method of collecting demographic data. A census is usually conducted by a national government and attempts to enumerate every person in a country. However, in contrast to vital statistics data, which are typically collected continuously and summarized on an annual basis, censuses typically occur only every 10 years or so, and thus are not usually the best source of data on births and deaths. Analyses are conducted after a census to estimate how much over or undercounting took place. These compare the sex ratios from the census data to those estimated from natural values and mortality data.

Censuses do more than just count people. They typically collect information about families or households in addition to individual characteristics such as age, sex, marital status, literacy/education, employment status, and occupation, and geographical location. They may also collect data on migration (or place of birth or of previous residence), language, religion, nationality (or ethnicity or race), and citizenship. In countries in which the vital registration system may be incomplete, the censuses are also used as a direct source of information about fertility and mortality; for example the censuses of the People's Republic of China gather information on births and deaths that occurred in the 18 months immediately preceding the census.

Map of countries by population 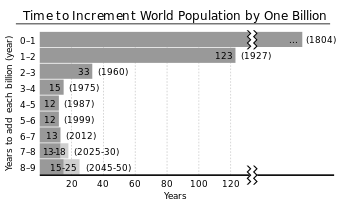 Indirect methods of collecting data are required in countries and periods where full data are not available, such as is the case in much of the developing world, and most of historical demography. One of these techniques in contemporary demography is the sister method, where survey researchers ask women how many of their sisters have died or had children and at what age. With these surveys, researchers can then indirectly estimate birth or death rates for the entire population. Other indirect methods in contemporary demography include asking people about siblings, parents, and children. Other indirect methods are necessary in historical demography.

The United Kingdom has a series of four national birth cohort studies, the first three spaced apart by 12 years: the 1946 National Survey of Health and Development, the 1958 National Child Development Study,[11] the 1970 British Cohort Study,[12] and the Millennium Cohort Study, begun much more recently in 2000. These have followed the lives of samples of people (typically beginning with around 17,000 in each study) for many years, and are still continuing. As the samples have been drawn in a nationally representative way, inferences can be drawn from these studies about the differences between four distinct generations of British people in terms of their health, education, attitudes, childbearing and employment patterns.[13]

A stable population does not necessarily remain fixed in size. It can be expanding or shrinking.[14]

Note that the crude death rate as defined above and applied to a whole population can give a misleading impression. For example, the number of deaths per 1,000 people can be higher for developed nations than in less-developed countries, despite standards of health being better in developed countries. This is because developed countries have proportionally more older people, who are more likely to die in a given year, so that the overall mortality rate can be higher even if the mortality rate at any given age is lower. A more complete picture of mortality is given by a life table which summarises mortality separately at each age. A life table is necessary to give a good estimate of life expectancy.

Suppose that a country (or other entity) contains Populationt persons at time t. What is the size of the population at time t + 1 ?

This basic equation can also be applied to subpopulations. For example, the population size of ethnic groups or nationalities within a given society or country is subject to the same sources of change. However, when dealing with ethnic groups, "net migration" might have to be subdivided into physical migration and ethnic reidentification (assimilation). Individuals who change their ethnic self-labels or whose ethnic classification in government statistics changes over time may be thought of as migrating or moving from one population subcategory to another.[15]

More generally, while the basic demographic equation holds true by definition, in practice the recording and counting of events (births, deaths, immigration, emigration) and the enumeration of the total population size are subject to error. So allowance needs to be made for error in the underlying statistics when any accounting of population size or change is made.

Populations can change through three processes: fertility, mortality, and migration. Fertility involves the number of children that women have and is to be contrasted with fecundity (a woman's childbearing potential).[17] Mortality is the study of the causes, consequences, and measurement of processes affecting death to members of the population. Demographers most commonly study mortality using the Life Table, a statistical device which provides information about the mortality conditions (most notably the life expectancy) in the population.[18]

Migration refers to the movement of persons from a locality of origin to a destination place across some pre-defined, political boundary. Migration researchers do not designate movements 'migrations' unless they are somewhat permanent. Thus demographers do not consider tourists and travelers to be migrating. While demographers who study migration typically do so through census data on place of residence, indirect sources of data including tax forms and labor force surveys are also important.[19]

Demography is today widely taught in many universities across the world, attracting students with initial training in social sciences, statistics or health studies. Being at the crossroads of several disciplines such as sociology, economics, epidemiology, geography, anthropology and history, demography offers tools to approach a large range of population issues by combining a more technical quantitative approach that represents the core of the discipline with many other methods borrowed from social or other sciences. Demographic research is conducted in universities, in research institutes as well as in statistical departments and in several international agencies. Population institutions are part of the Cicred (International Committee for Coordination of Demographic Research) network while most individual scientists engaged in demographic research are members of the International Union for the Scientific Study of Population,[20] or a national association such as the Population Association of America in the United States,[21] or affiliates of the Federation of Canadian Demographers in Canada.[22]