From Infogalactic: the planetary knowledge core
Jump to: navigation, search
This article is about mass density. For other uses, see Density (disambiguation).

The density, or more precisely, the volumetric mass density, of a substance is its mass per unit volume. The symbol most often used for density is ρ (the lower case Greek letter rho), although the Latin letter D can also be used. Mathematically, density is defined as mass divided by volume:[1]

where ρ is the density, m is the mass, and V is the volume. In some cases (for instance, in the United States oil and gas industry), density is loosely defined as its weight per unit volume,[2] although this is scientifically inaccurate – this quantity is more specifically called specific weight.

For a pure substance the density has the same numerical value as its mass concentration. Different materials usually have different densities, and density may be relevant to buoyancy, purity and packaging. Osmium and iridium are the densest known elements at standard conditions for temperature and pressure but certain chemical compounds may be denser.

To simplify comparisons of density across different systems of units, it is sometimes replaced by the dimensionless quantity "relative density" or "specific gravity", i.e. the ratio of the density of the material to that of a standard material, usually water. Thus a relative density less than one means that the substance floats in water.

The density of a material varies with temperature and pressure. This variation is typically small for solids and liquids but much greater for gases. Increasing the pressure on an object decreases the volume of the object and thus increases its density. Increasing the temperature of a substance (with a few exceptions) decreases its density by increasing its volume. In most materials, heating the bottom of a fluid results in convection of the heat from the bottom to the top, due to the decrease in the density of the heated fluid. This causes it to rise relative to more dense unheated material.

The reciprocal of the density of a substance is occasionally called its specific volume, a term sometimes used in thermodynamics. Density is an intensive property in that increasing the amount of a substance does not increase its density; rather it increases its mass.

In a well-known but probably apocryphal tale, Archimedes was given the task of determining whether King Hiero's goldsmith was embezzling gold during the manufacture of a golden wreath dedicated to the gods and replacing it with another, cheaper alloy.[3] Archimedes knew that the irregularly shaped wreath could be crushed into a cube whose volume could be calculated easily and compared with the mass; but the king did not approve of this. Baffled, Archimedes is said to have taken an immersion bath and observed from the rise of the water upon entering that he could calculate the volume of the gold wreath through the displacement of the water. Upon this discovery, he leapt from his bath and ran naked through the streets shouting, "Eureka! Eureka!" (Εύρηκα! Greek "I have found it"). As a result, the term "eureka" entered common parlance and is used today to indicate a moment of enlightenment.

The story first appeared in written form in Vitruvius' books of architecture, two centuries after it supposedly took place.[4] Some scholars have doubted the accuracy of this tale, saying among other things that the method would have required precise measurements that would have been difficult to make at the time.[5][6]

From the equation for density (ρ = m / V), mass density has units of mass divided by volume. As there are many units of mass and volume covering many different magnitudes there are a large number of units for mass density in use. The SI unit of kilogram per cubic metre (kg/m3) and the cgs unit of gram per cubic centimetre (g/cm3) are probably the most commonly used units for density.1,000 kg/m3 equals 1 g/cm3. (The cubic centimeter can be alternately called a millilitre or a cc.) In industry, other larger or smaller units of mass and or volume are often more practical and US customary units may be used. See below for a list of some of the most common units of density.

The density at all points of a homogeneous object equals its total mass divided by its total volume. The mass is normally measured with a scale or balance; the volume may be measured directly (from the geometry of the object) or by the displacement of a fluid. To determine the density of a liquid or a gas, a hydrometer, a dasymeter or a Coriolis flow meter may be used, respectively. Similarly, hydrostatic weighing uses the displacement of water due to a submerged object to determine the density of the object.

If the body is not homogeneous, then its density varies between different regions of the object. In that case the density around any given location is determined by calculating the density of a small volume around that location. In the limit of an infinitesimal volume the density of an inhomogeneous object at a point becomes: ρ(

) = dm/dV, where dV is an elementary volume at position r. The mass of the body then can be expressed as

In practice, bulk materials such as sugar, sand, or snow contain voids. Many materials exist in nature as flakes, pellets, or granules.

Voids are regions which contain something other than the considered material. Commonly the void is air, but it could also be vacuum, liquid, solid, or a different gas or gaseous mixture.

The bulk volume of a material—inclusive of the void fraction—is often obtained by a simple measurement (e.g. with a calibrated measuring cup) or geometrically from known dimensions.

Mass divided by bulk volume determines bulk density. This is not the same thing as volumetric mass density.

To determine volumetric mass density, one must first discount the volume of the void fraction. Sometimes this can be determined by geometrical reasoning. For the close-packing of equal spheres the non-void fraction can be at most about 74%. It can also be determined empirically. Some bulk materials, however, such as sand, have a variable void fraction which depends on how the material is agitated or poured. It might be loose or compact, with more or less air space depending on handling.

In practice, the void fraction is not necessarily air, or even gaseous. In the case of sand, it could be water, which can be advantageous for measurement as the void fraction for sand saturated in water—once any air bubbles are thoroughly driven out—is potentially more consistent than dry sand measured with an air void.

In the case of non-compact materials, one must also take care in determining the mass of the material sample. If the material is under pressure (commonly ambient air pressure at the earth's surface) the determination of mass from a measured sample weight might need to account for buoyancy effects due to the density of the void constituent, depending on how the measurement was conducted. In the case of dry sand, sand is so much denser than air that the buoyancy effect is commonly neglected (less than one part in one thousand).

Mass change upon displacing one void material with another while maintaining constant volume can be used to estimate the void fraction, if the difference in density of the two voids materials is reliably known.

The effect of pressure and temperature on the densities of liquids and solids is small. The compressibility for a typical liquid or solid is 10−6 bar−1 (1 bar = 0.1 MPa) and a typical thermal expansivity is 10−5 K−1. This roughly translates into needing around ten thousand times atmospheric pressure to reduce the volume of a substance by one percent. (Although the pressures needed may be around a thousand times smaller for sandy soil and some clays.) A one percent expansion of volume typically requires a temperature increase on the order of thousands of degrees Celsius.

In the case of volumic thermal expansion at constant pressure and small intervals of temperature the temperature dependence of density is :

is the density at a reference temperature,

The density of a solution is the sum of mass (massic) concentrations of the components of that solution.

Mass (massic) concentration of each given component ρi in a solution sums to density of the solution.

Expressed as a function of the densities of pure components of the mixture and their volume participation, it allows the determination of excess molar volumes:

provided that there is no interaction between the components. 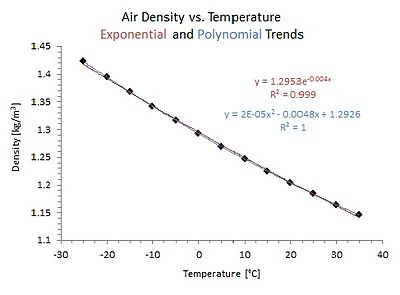 The SI unit for density is:

Litres and metric tons are not part of the SI, but are acceptable for use with it, leading to the following units:

Densities using the following metric units all have exactly the same numerical value, one thousandth of the value in (kg/m3). Liquid water has a density of about 1 kg/dm3, making any of these SI units numerically convenient to use as most solids and liquids have densities between 0.1 and 20 kg/dm3.

In US customary units density can be stated in: