From Infogalactic: the planetary knowledge core
Jump to: navigation, search
This article is about the dental profession. For tooth care, see oral hygiene and dental surgery.
For other uses, see Dentist (disambiguation).

A dentist, also known in the U.S. as a dental surgeon, is a surgeon who specializes in dentistry—the diagnosis, prevention, and treatment of diseases and conditions of the oral cavity. The dentist's supporting team aids in providing oral health services. The dental team includes dental assistants, dental hygienists, dental technicians, and in some states, dental therapists.

In China as well as France, the first people to perform dentistry were barbers. They have been categorized into 2 distinct groups: guild of barbers and lay barbers. The first group, the Guild of Barbers, was created to distinguish more educated and qualified dental surgeons from lay barbers. Guild barbers were trained to do complex surgeries. The second group, the lay barbers, were qualified to perform regular hygienic services such as shaving and tooth extraction as well as basic surgery. However, in 1400 France made decrees prohibiting lay barbers from practicing all types of surgery. In Germany as well as France from 1530 to 1575 publications completely devoted to dentistry were being published. Ambrose Pare, often known as the Father of Surgery, published his own work about the proper maintenance and treatment of teeth. Ambrose Pare was a French barber surgeon who performed dental care for multiple French monarchs. He is often credited with having raised the status of barber surgeons.[1][2] 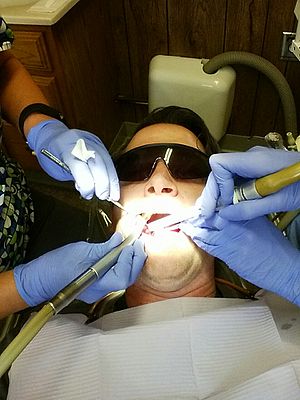 A man being worked on at the dentist

In France, Pierre Fauchard published a book describing dental techniques and practices. Pierre Fauchard is often referred to as the Father of Modern dentistry because his publication was thought to be the first complete scientific description of dentistry.[3] Overtime trained dentists immigrated to America to practice dentistry, and by 1760, America had its own native born practicing dentists. Newspapers were used at the time to advertise and promote dental services . In America from 1768-1770 the first application of dentistry to verify forensic cases was being pioneered; this was called forensic dentistry. With the rise of dentists there was also the rise of new methods to improve the quality of dentistry. These new methods included the spinning wheel to rotate a drill and chairs made specifically for dental patients.[4]

In the 1840s the worlds first dental school and national dental organization were established. Along with the first dental school came the establishment of the Doctor of Dental Surgery degree, often refereed to as a DDS degree. In response to the rise in new dentists as well as dentistry techniques, the first dental practice act was established. The act was created to regulate dentistry. In the United States, the First Dental Practice Act required dentists to pass each specific states medical board exam in order to practice dentistry in that particular state. However, because the dental act was rarely enforced, some dentists did not obey the act. From 1846-1855 new dental techniques were being invented such as the use of ester anesthesia for surgery, and the cohesive gold foil method which enabled gold to be applied to a cavity. The American Dental Association was established in 1859 after a meeting with 26 dentists. Around 1867, the first university associated dental school was established, Harvard Dental School. Lucy Hobbs Taylor was the first woman to earn a dental degree. In the 1880s, tube toothpaste was created which replaced the original forms of powder or liquid toothpaste. New dental boards, such as the National Association of Dental Examiners, were created to establish standards and uniformity among dentist.[4] In 1887 the first dental laboratory was established; dental laborites are used to create dentures and crowns that are specific to each patient.[5] In 1895 the dental X-ray was discovered by a German physicist, Wilhelm Rontgen.[6]

All dentists in the U.S. must graduate from high school and complete required courses such as general biology, general chemistry, organic chemistry, physics, and statistics/calculus. While nearly all dental schools require at least a bachelor's degree (4 years of college coursework), a select few may consider admitting exceptional students after only 3 years of college, although this is very rare. To apply, students must take the Dental Admissions Test (DAT). It is recommended by the American Dental Association that students take the DAT a year before admission.[8] Admission to dental school is competitive, and is generally determined based on factors such as GPA, DAT scores, research, recommendation letters, and extracurricular activities. To become a licensed dentist, one must then complete an accredited dental school curriculum and successfully master all clinical competencies and national board exams. Most dental school curricula require four years of training, however, some states require dentists to complete a post graduate residency program as well (e.g. New York). In the U.S., a newly graduated dentist is then awarded the DDS, Doctor of Dental Surgery, degree or the DMD, Doctor of Dental Medicine, degree depending on the dental school attended. The degrees are equivalent. A newly graduated dentist can then pursue further specialty residency training ranging from 2 to 6 years in one of the recognized specialties. Additionally, dentists are required to participate in continuing education where they attend lectures to learn of recent developments, practice new methods, and earn continuing education hours throughout their career. 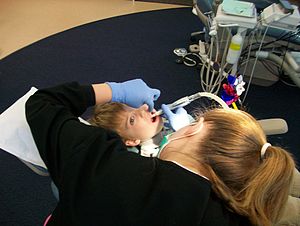 A dentist in Finland treating a child

By nature of their general training, a licensed dentist can carry out most dental treatments such as Professional teeth cleaning, restorative (dental restorations, crowns, bridges), orthodontics (braces), prosthodontic (dentures, crown/bridge), endodontic (root canal) therapy, periodontal (gum) therapy, and oral surgery (extraction of teeth), as well as performing examinations, taking radiographs (x-rays) and diagnosis. Additionally, dentists can further engage in oral surgery procedures such as dental implant placement. Dentists can also prescribe medications such as antibiotics, fluorides, pain killers, local anesthetics, sedatives/hypnotics and any other medication that serve in the treatment of the various conditions that arise in the head and neck.

Dentists need to take additional qualifications or training to carry out more complex procedures such as General anesthesia, oral and maxillofacial surgery, and implants. While many oral diseases are unique and self-limiting, poor conditions in the oral cavity can lead to poor general health and vice versa. Conditions in the oral cavity may be indicative of systemic diseases such as osteoporosis, diabetes, AIDS, different blood diseases(including malignancies and lymphoma) etc.

Specialists in these fields are designated "registrable" (in the United States, "board eligible") and warrant exclusive titles such as orthodontist, oral and maxillofacial surgeon, endodontist, pediatric dentist, periodontist, or prosthodontist upon satisfying certain local accreditation requirements (U.S., "Board Certified").