Deschutes County /dəˈʃuːts/ is a county located in the U.S. state of Oregon. As of the 2010 census, the population was 157,733.[1] The county seat is Bend.[2] The county was created in 1916 out of part of Crook County and was named for the Deschutes River, which itself was named by French-Canadian trappers of the early 19th century. It is the political and economic hub of Central Oregon.

Deschutes is the fastest-growing county in Oregon.[4]

French-Canadian fur trappers of the Hudson's Bay Company gave the name Riviere des Chutes (River of the Falls) to the Deschutes River, from which the county derived its name.[5]

On December 13, 1916, Deschutes County was created from the southern part of Crook County. Bend has been the county seat since the county's formation. It was the last county in Oregon to be established. 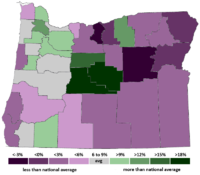 Deschutes County grew by 39.4% from 2000 to 2007, making it by far the fastest-growing county in Oregon, at more than four times the state average.

In 2008, the Oregon house seat encompassing the city of Bend switched parties and hosted the only Democratic state legislator from a district east of the Cascades,[17] though the Republicans retook the seat in 2010.[18] 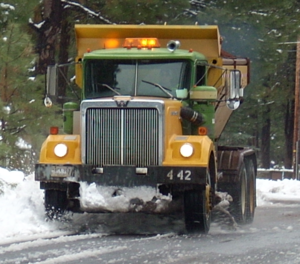 During the 1990s, Deschutes County experienced the most rapid growth of any county in Oregon largely due to the availability of recreation activities year-round, and its location as the nearest population center to much of the central Cascade Range. Beyond tourism, principal industries in the county are lumber, ranching and agriculture—chiefly potatoes. The Forest Service owns 51% of the lands within the county boundaries.

Deschutes County is the home of four destination resorts as defined by Oregon's Department of Land Conservation and Development. These resort are major employers within the county. Three of these resorts, Sunriver, Eagle Crest, and Pronghorn, are among the county's ten largest tax payers.[19]

The overall defining landscape of Deschutes County is primarily marked with that of lava flows. Most of the lava found in Deschutes County issued forth from Newberry Volcano located just south of Bend. Because of this, many lava tubes are located within, including the prominent Lava River Cave. As a consequence, the county is the most cave-rich in the state of Oregon,[20] with over 500 known caves in the county.[21] Other prominent lava flows exist too, especially those related to the Mount Bachelor Volcanic Chain which consists of Mt. Bachelor as well as three smaller shield volcanos, and a series of cinder cones.[22] 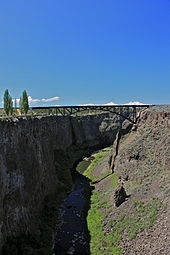 Large volcanoes serve as a backdrop to the city of Bend in Deschutes County, ranging from the prominent Three Sisters, Mt. Washington, Mt. Bachelor, Broken Top, Newberry, Tumalo Mountain, Maiden Peak and others. A group of geologists have discovered Smith Rock State Park is part of an ancient supervolcano called the Crooked River caldera with a rim nearly six times the diameter of Newberry Volcano's caldera. This ancient supervolcano has long gone extinct. Its crater rim is barely recognizable as remnants mark portions of Powell Buttes, Gray Butte, and the western front of the Ochoco Mountains at Barnes Butte.[23]

On the eastern side of the county, it is mostly characterized by large buttes of much older volcanic origin. Most of these did not create any proper lava flows, or at least none that are known to exist. Some of the prominent buttes include: Horse Ridge, Pine Mountain, China Hat, and several others on the county border.

Two main types of lava flows are found within the county. The most common are the pāhoehoe flows which have been partially buried by volcanic ash, tephra deposits, and dirt over tens to hundreds of thousands of years. The ʻaʻā flows are fewer, but are much more prominent, with the most notable being associated with Lava Butte and the Lava Cast Forest in the Newberry National Volcanic Monument. 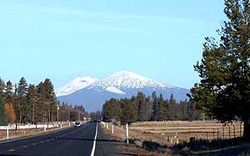 View of the Cascades near La Pine, Oregon.