Deutsche Telekom AG (abbreviated DT, English: German Telecom) is a German telecommunications company headquartered in Bonn. Deutsche Telekom was formed in 1996 as the former state-owned monopoly Deutsche Bundespost was privatized. As of June 2008, the German government still holds a 15% stake in company stock directly, and another 17% through the government bank KfW. The company is a component of the Euro Stoxx 50 stock market index.[4]

Deutsche Telekom was the monopoly internet service provider (ISP) for the German Internet until its privatization in 1995, and the dominant ISP thereafter.[7] Until the early 21st century, Deutsche Telekom controlled almost all Internet access by individuals and small businesses in Germany, as they were one of the first German telekom units.[7]

In 2008, the structure was changed again. T-Online was separated from Deutsche Telekom and merged with T-Com to form the new unit T-Home. In 2010, Orange parent France Télécom and T-Mobile parent Deutsche Telekom merged their UK operations to create the largest mobile network in Britain now known as EE.[9]

In April 2010, T-Mobile was merged with T-Home to form Telekom Deutschland GmbH. This unit now handles all products and services aimed at private customers. In October 2012, Deutsche Telekom and Orange created a 50-50% joint venture named BuyIn for regrouping their procurement operations and benefiting from scale effect.[10]

In April 2013, T-Mobile US and MetroPCS merged their operations in the United States.[11] In February 2014, Deutsche Telekom acquired the remaining parts of its T-Mobile Czech Republic division for around €800 million. The size of the remaining stake was numbered at 40 percent.[12] 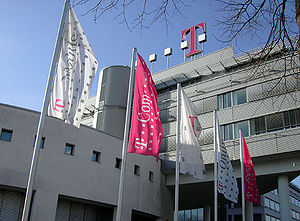