From Infogalactic: the planetary knowledge core
Jump to: navigation, search
For the notion of diameter in graph theory, see Distance (graph theory). For the computer network protocol, see Diameter (protocol).
Not to be confused with Demeter. 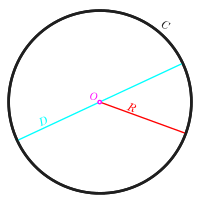 Circle with circumference (C) in black, diameter (D) in cyan, radius (R) in red, and centre or origin (O) in magenta.

In more modern usage, the length of a diameter is also called the diameter. In this sense one speaks of the diameter rather than a diameter (which refers to the line itself), because all diameters of a circle or sphere have the same length, this being twice the radius r.

For a convex shape in the plane, the diameter is defined to be the largest distance that can be formed between two opposite parallel lines tangent to its boundary, and the width is defined to be the smallest such distance. Both quantities can be calculated efficiently using rotating calipers.[2] For a curve of constant width such as the Reuleaux triangle, the width and diameter are the same because all such pairs of parallel tangent lines have the same distance.

For an ellipse, the standard terminology is different. A diameter of an ellipse is any chord passing through the midpoint of the ellipse.[3] For example, conjugate diameters have the property that a tangent line to the ellipse at the endpoint of one of them is parallel to the other one. The longest diameter is called the major axis.

The definitions given above are only valid for circles, spheres and convex shapes. However, they are special cases of a more general definition that is valid for any kind of n-dimensional convex or non-convex object, such as a hypercube or a set of scattered points. The diameter of a subset of a metric space is the least upper bound of the set of all distances between pairs of points in the subset. So, if A is the subset, the diameter is

If the distance function d is viewed here as having codomain R (the set of all real numbers), this implies that the diameter of the empty set (the case A = ∅) equals −∞ (negative infinity). Some authors prefer to treat the empty set as a special case, assigning it a diameter equal to 0,[4] which corresponds to taking the codomain of d to be the set of nonnegative reals.

In differential geometry, the diameter is an important global Riemannian invariant.

In plane geometry, a diameter of a conic section is typically defined as any chord which passes through the conic's centre; such diameters are not necessarily of uniform length, except in the case of the circle, which has eccentricity e = 0.

Sign ⌀ in a technical drawing
File:Sign diameter.png
Sign ⌀ from AutoCAD drawing
Not to be confused with the Scandinavian letter "Ø" or the empty set symbol "∅".

The symbol or variable for diameter, ⌀, is similar in size and design to ø, the Latin small letter o with stroke. In Unicode it is defined as U+2300 ⌀ DIAMETER SIGN (HTML &#8960;). On an Apple Macintosh, the diameter symbol can be entered via the character palette (this is opened by pressing ⌥ Opt⌘ CmdT in most applications), where it can be found in the Technical Symbols category.

The character will sometimes not display correctly, however, since many fonts do not include it. In most situations the letter ø is acceptable, which is unicode 0248 (hexadecimal 00F8). It can be obtained in UNIX-like operating systems using a Compose key by pressing, in sequence, Composedi[citation needed] and on a Macintosh by pressing ⌥ Opt O (in both cases, that is the letter o, not the number 0).

In LaTeX the symbol is achieved with the command \diameter which is part of the wasysym package.

The diameter symbol ⌀ is distinct from the empty set symbol ∅, from an (italic) uppercase phi Φ, and from the Nordic vowel Ø.[5]