From Infogalactic: the planetary knowledge core
Jump to: navigation, search
File:Diepkloof-excavation-2009.JPG
General view of the excavation during 2009 field season 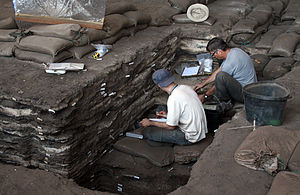 Excavation of the upper part of the deposit

Diepkloof Rock Shelter is a rock shelter in Western Cape, South Africa in which has been found some of the earliest evidence of the human use of symbols, in the form of patterns engraved upon ostrich eggshell water containers. These date around 60,000 years ago.[1][2]

The symbolic patterns consist of lines crossed at right angles or oblique angles by hatching. It has been suggested that "by the repetition of this motif, early humans were trying to communicate something. Perhaps they were trying to express the identity of the individual or the group."[3]

The cave is about 17 kilometres (11 mi) from the shoreline of the Atlantic in a semi-arid area, near Elands Bay about 150 kilometres (93 mi) north of Cape Town.[2] It occurs in quartzitic sandstone in a butte that overlooks in an east direction 100 metres (330 ft) above the Verlorenvlei River. It contains one of "most complete and continuous later Middle Stone Age sequences in southern Africa"[1] stretching from before 130,000 BP to about 45,000 BP and encompassing pre-Stillbay, Stillbay, Howiesons Poort, and post-Howiesons Poort periods. It is about 25 metres (82 ft) wide and 15 metres (49 ft) deep. Research is based upon finds discovered in a trench excavated within it that is 16 metres (52 ft) across and 3.6 metres (12 ft) in depth. The deposits consist of burnt and nonburnt organic residues and ash that came from hearths, ash dumps and burnt bedding.[1]

At Diepkloof Rock Shelter (DRS), from 70-74 ka bifaces and bifacial points are present while less complex forms such as backed artifacts occur from 70 ka through 60 ka and are subsequently replaced with unifacial points. Quartz and quartzite predominate the earliest unit with few occurrences of silcrete. During 70-74 ka unit, silcrete has replaced quartz while quartzite is still fairly dominant. From 65-70 ka quartz becomes dominant again with quartzite also being present.[5]

The engraving consists of abstract linear repetitive patterns, including a hatched band motif. One fragment has two parallel lines that might have been circular around the container.

It has been suggested that they form "a system of symbolic representation in which collective identities and individual expressions are clearly communicated, suggesting social, cultural, and cognitive underpinnings that overlap with those of modern people."[1] Moreover, they show "the development of a graphic tradition and the complex use of symbols to mediate social interactions. The large number of marked pieces shows that there were rules for composing designs but having room within the rules to allow for individual and/or group preferences."[1]

Earlier finds exist of symbolism, such as the 75,000-year-old engraved ochre chunks found in the Blombos cave, but these are isolated and difficult to tell apart from meaningless doodles.[3]

The engravings are found on ostrich eggshells that were used as water containers. Ostrich eggshells have an average volume of 1 litre. They may have had drinking spouts, holes to enable them to be strung as a canteen for easier carrying, and seem to have been part of "daily hunter-gatherer life".[1] They involved skill to make, with one of the researchers involved noting "Ostrich egg shells are quite hard. Doing such engravings is not so easy."[3]

The preservation of organic matter such as wood, grass, seeds and fruits at the site has been described as "exceptional".[2] Pollen remains allow the identification of the local animals and plants. The Howiesons Poort period shows evidence for thicket or shrubland vegetation now usually found in gorges, such as Diospyros, Cassine peragua, Maytenus, Rhus, and Hartogiella schinoides. Afromontane trees found in the area, include Ficus, Kiggelaria africana, Podocarpus elongatus, and Celtis africana. This suggests a more diversely wooded riverine environment than now present in the area.[1]

Animal remains include those of mammals, tortoises and intertidal marine shells. Most bones found in the cave come from rock hyrax, hares, cape dune mole-rats, steenbok and grysbok. Animals from rocky environments are also found including klipspringer, and vaalribbok. There is also evidence of local grasslands, with remains of zebras, wildebeest and hartebeest. Hippopotamus and southern reedbuck came from the local river. The sea coast seems to have moved up the river, as there are fragments from black mussels, granite limpets, and Cape fur seals. Though there are ostrich-shell remains, no ostrich bones have been found.[1]

Tortoise bones are mostly those of the angulate tortoise that is still found in the area. These are noted to have been "remarkably large compared with their Late Stone Age counterparts, suggesting different intensities of predation between MSA and Late Stone Age populations".[1]

Diepkloof Rock Shelter was declared a provincial heritage site by Heritage Western Cape on the 23 September 2014 in terms of Section 27 of the National Heritage Resources Act. [6] This gives the site Grade II status and provides the site with protection under South African heritage law.

Mussel Point is another megamidden that has recently been declared a provincial heritage site.