From Infogalactic: the planetary knowledge core
Jump to: navigation, search
For other uses, see Terapanth.

Digambara Terapanth is a reformist sect of Digambara Jainism that formed out of strong aniconism and opposition to the religious domination of traditional religious leaders called bhattarakas who follow Moola Jain Dharma (Pivot of Jainism). They oppose the worship of various minor gods and goddesses. Some Terapanthi practices, like not using flowers in worship, gradually spread throughout most of North Indian Jainism as well. 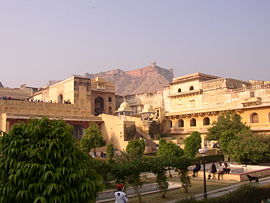 The Bispanth-Terapanth division among the Digambaras emerged in the 17th century in the Jaipur region: Sanganer, Amer and Jaipur itself.[2]

Bakhtaram in his "Mithyatva Khandan Natak" (1764) mentions that group that started it included 13 individuals who collectively built a new temple, thus giving it its name Terapanth, which literally means "thirteen-panthan". Alternatively, according to "Kavitta Terapanth kau" by Chanda Kavi, the movement was named Terapanth because it founders disagreed with the Bhattaraka on thirteen points. A letter of 1692 from Terapanthis at Kama to those at Sanganer mentions 13 rituals practices they rejected. 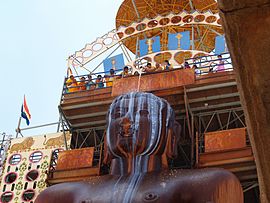 The letter by Tera Panthis at Kama also mentions: