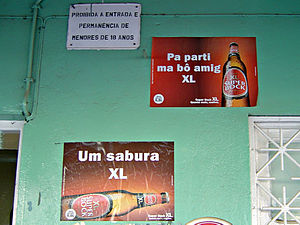 Diglossia: Portuguese and Creole; Mindelo, São Vicente, Cape Verde. Portuguese can be read on the upper sign, while Creole is written on the two beer advertisements.

In linguistics, diglossia (/daɪˈɡlɒsiə/; Greek: διγλωσσία < δι- prefix denoting two, from δίς, twice + γλῶσσα, language + -ία, suffix denoting state or attribute, "speaking two languages") refers to a situation in which two dialects or languages are used by a single language community. In addition to the community's everyday or vernacular language variety (labelled "L" or "low" variety), a second, highly codified variety (labelled "H" or "high") is used in certain situations such as literature, formal education, or other specific settings, but not used for ordinary conversation.[1]

The high variety may be an older stage of the same language (e.g. Latin in the early Middle Ages), an unrelated language, or a distinct yet closely related present day dialect (e.g. Norwegian with Bokmål and Nynorsk, or Chinese with Mandarin as the official, literary standard and colloquial topolects/dialects used in everyday communication). Other examples include literary Katharevousa versus spoken Demotic Greek, Indonesian, with its Baku and Gaul forms,[2] and the Dravidian language Tamil of southern India and Telugu with their respective high and low registers.[3]

The Greek word διγλωσσία (diglōssia) normally refers to bilingualism in general, but was first used in the specialized meaning explained by Emmanuel Rhoides in the prologue of his Parerga in 1885. The term was immediately adapted into French as diglossie by the Greek linguist and demoticist Ioannis Psycharis, with credit to Rhoides. The Arabist William Marçais used the term in 1930 to describe the linguistic situation in Arabic-speaking countries. The sociolinguist Charles A. Ferguson introduced the English equivalent diglossia in 1959. The article has become such a classic that it has been cited over 4,000 times according to Google scholar.[4]

Language registers and types of diglossia

In his 1959 article, Charles A. Ferguson defines diglossia as follows:

DIGLOSSIA is a relatively stable language situation in which, in addition to the primary dialects of the language (which may include a standard or regional standards), there is a very divergent, highly codified (often grammatically more complex) superposed variety, the vehicle of a large and respected body of written literature, either of an earlier period or in another speech community, which is learned largely by formal education and is used for most written and formal spoken purposes but is not used by any section of the community for ordinary conversation.[1]

Joshua Fishman expanded the definition of diglossia to include the use of unrelated languages as high and low varieties.[5] For example, in Alsace the Alsatian language (Elsässisch) serves as (L) and French as (H). Heinz Kloss calls the (H) variant exoglossia and the (L) variant endoglossia.[citation needed]

In some cases (especially with creole languages), the nature of the connection between (H) and (L) is not one of diglossia but a continuum; for example, Jamaican Creole as (L) and Standard English as (H) in Jamaica.

(H) is usually the written language whereas (L) is the spoken language. In formal situations, (H) is used; in informal situations, (L) is used. One of the earliest known examples is Latin, Classical Latin being the (H) and Vulgar Latin the (L). The latter, which is almost completely unattested in text, is the tongue from which the Romance languages descended.

The (L) variants are not just simplifications or "corruptions" of the (H) variants. In phonology, for example, (L) dialects are as likely to have phonemes absent from the (H) as vice versa. Some Swiss German dialects have three phonemes, /e/, /ɛ/ and /æ/, in the phonetic space where Standard German has only two phonemes, /ɛ(ː)/ (Berlin 'Berlin', Bären 'bears') and /eː/ (Beeren 'berries'). Jamaican Creole has fewer vowel phonemes than standard English, but it has additional palatal /kʲ/ and /ɡʲ/ phonemes.

Especially in endoglossia the (L) form may also be called "basilect", the (H) form "acrolect", and an intermediate form "mesolect".

Ferguson's classic examples include Standard German/Swiss German, Standard Arabic/vernacular Arabics, Standard French/Creole in Haiti, and Katharevousa/Dhimotiki in Greece.[1] Creole is now recognized as a standard language in Haiti. Swiss German dialects are hardly languages with low prestige in Switzerland (see Chambers, Sociolinguistic Theory). And after the end of the military regime in 1974, Dhimotiki was made into Greece's only standard language (1976). Nowadays, Katharevousa is (with a few exceptions) no longer used. Harold Schiffman writes about Swiss German: "it seems to be the case that Swiss German was once consensually agreed to be in a diglossic hierarchy with Standard German, but that this consensus is now breaking."[6] There is also common code-switching especially in the Arabic world; according to Andrew Freeman this is "different from Ferguson's description of diglossia which states that the two forms are in complementary distribution."[7][unreliable source?] To a certain extent, there is code switching and overlap in all diglossic societies, even German-speaking Switzerland.

Examples where the High/Low dichotomy is justified in terms of social prestige include Italian dialects as (L) and Standard Italian as (H) in Italy and German dialects and standard German in Germany. In Italy and Germany, those speakers who still speak non-standard dialects typically use those dialects in informal situations, especially in the family. In German-speaking Switzerland, on the other hand, Swiss German dialects are to a certain extent even used in schools and to a larger extent in churches. Ramseier calls German-speaking Switzerland's diglossia a "medial diglossia", whereas Felicity Rash prefers "functional diglossia".[8] Paradoxically, Swiss German offers both the best example of diglossia (all speakers are native speakers of Swiss German and thus diglossic) and the worst, because there is no clear-cut hierarchy.

As an aspect of study of the relationships between codes and social structure, diglossia is an important concept in the field of sociolinguistics. At the social level, each of the two dialects has certain spheres of social interaction assigned to it and in the assigned spheres it is the only socially acceptable dialect (with minor exceptions). At the grammatical level, differences may involve pronunciation, inflection, and/or syntax (sentence structure). Differences can range from minor (although conspicuous) to extreme. In many cases of diglossia, the two dialects are so divergent that they are distinct languages as defined by linguists: they are not mutually intelligible.

The dialect that is the original mother tongue is almost always of low prestige. Its spheres of use involve informal, interpersonal communication: conversation in the home, among friends, in marketplaces. In some diglossias, this vernacular dialect is virtually unwritten. Those who try to use it in literature may be severely criticized or even persecuted. The other dialect is held in high esteem and is devoted to written communication and formal spoken communication, such as university instruction, primary education, sermons, and speeches by government officials. It is usually not possible to acquire proficiency in the formal, "high" dialect without formal study of it. Thus in those diglossic societies which are also characterized by extreme inequality of social classes, most people are not proficient in speaking the high dialect, and if the high dialect is grammatically different enough, as in the case of Arabic diglossia, these uneducated classes cannot understand most of the public speeches that they might hear on television and radio. The high prestige dialect (or language) tends to be the more formalised, and its forms and vocabulary often 'filter down' into the vernacular though often in a changed form.

In many diglossic areas, there is controversy and polarization of opinions of native speakers regarding the relationship between the two dialects and their respective statuses. In cases that the "high" dialect is objectively not intelligible to those exposed only to the vernacular, some people insist that the two dialects are nevertheless a common language. The pioneering scholar of diglossia, Charles A. Ferguson, observed that native speakers proficient in the high prestige dialect will commonly try to avoid using the vernacular dialect with foreigners and may even deny its existence even though the vernacular is the only socially appropriate one for themselves to use when speaking to their relatives and friends. Yet another common attitude is that the low dialect, which is everyone's native language, ought to be abandoned in favor of the high dialect, which presently is nobody's native language.

Mukul Saxena has taken the term "diglossia" and applied it to different data, adding both a critical perspective from the Sociolinguistics of Periphery and also making a distinction between linguistic capital and language capital. It is too soon to tell whether this will become a widely used application of "diglossia".

‘Critical diglossia’,[9] a revised notion of diglossia, underpins the state sponsored ideological dimension of the High and Low functional distribution of languages and the attitudes towards languages. In contrast to the language-centric notion of classical diglossia, the revised notion contends that diglossia is primarily a socio-cultural, economic and political phenomenon not necessarily accepted as a natural state of affairs by all the minority groups, the speakers of Low languages/varieties. Critical diglossia not only describes how language varieties and languages in a particular linguistic market are functionally distributed in formal and informal domains and their linguistic and language capitals are valued as High and Low, but also studies the reasons why the asymmetrical relationship between the language varieties and languages develops, as well as the role that historical and current political, economic and socio-cultural processes play in its construction.

While it draws on the earlier contribution of sociolinguistics of periphery in acknowledging diglossia as imposed from above, it goes further in incorporating the role of agency as proposed in another revised concept, ‘lifestyle diglossia’.[9] Lifestyle diglossia contends how and why diglossia can also develop from below in the way individuals’ everyday socio-cultural practices and projection of identities shape their language practices.

Alternative lifestyles reflected in these practices are facilitated by the unprecedented nature of the flows of ideas, people, goods and language practices that are associated with 21st century globalization. This focus on people’s everyday practices allows for observing the language choices people make as inextricably linked to their chosen lifestyles. By capturing the micro-level practices, the ‘lifestyle diglossia’ suggests that people actively project their group affiliations and individuality by drawing on the global flows of lifestyles and local structural arrangements.

For example, when German speakers use English, they are doing more than speaking a foreign language. According to Passmore: “The use of English doesn’t express some asymmetrical power relationship between German and English, nor is it related to class or race or whatnot. Sure, there are poseurs, but it’s stupid to think Germans who can speak the language of cars in English because they race them or the language of music because they consume and/or play music are living out some desperate wannabe existence by using and knowing English terms for these things. It’s probably because with the English knowledge of these terms, one can find an even larger pool of interlocutors about a specific subject (or “lifestyle” object) online or even within Germany itself. These words become native to the speaker of that “lifestyle diglossia” in ways that those words are not native to the “native” to the speakers of the language where these words ostensibly come from.”[10]