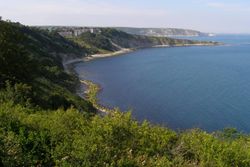 A discordant coastline occurs where bands of different rock type run perpendicular to the coast.

Part of the Dorset coastline running north from the Portland limestone of Durlston Head is a clear example of a discordant coastline. The Portland limestone is resistant to erosion; then to the north there is a bay at Swanage where the rock type is a softer greensand. North of Swanage, the chalk outcrop creates the headland which includes Old Harry Rocks.