Disney Springs is an outdoor shopping, dining, and entertainment complex at the Walt Disney World Resort in Bay Lake, Florida, near Orlando. The complex opened on March 22, 1975 as the Lake Buena Vista Shopping Village and has been expanded and renamed at other times over the years. It was first renamed Walt Disney World Village in 1977; then to Disney Village Marketplace in 1989; and afterward to Downtown Disney in 1997. In 2013, plans were announced for a three-year renovation of the complex, and on September 29, 2015, the name officially changed from Downtown Disney to Disney Springs.

The current complex includes three areas: West Side, the Landing, and the Marketplace. Disney Springs is open year-round and requires no admission or parking fees. Buses and water taxis operated by Disney Transport provide free transportation to and from Disney Springs to Walt Disney World resort guests. 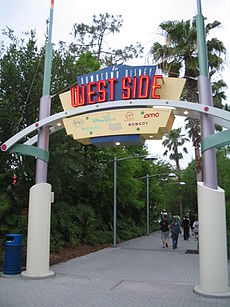 Entrance to the West Side

The Lake Buena Vista Shopping Village, which opened on March 22, 1975, was originally envisioned as an area shopping mall that would be mainly perused by people living in Walt Disney World. However, since more hotel rooms than residences were being built, the complex mainly became targeted toward Disney World guests, and just two years after its opening, the complex was renamed Walt Disney World Village. With the advent of new management under Michael Eisner in 1984, Disney began looking for ways to keep vacationers on Walt Disney World property longer, and entice them with offerings to prevent them from leaving for entertainment beyond Disney's borders.[1]

To compete with the popular Church Street Station clubs in downtown Orlando, Disney announced the addition of Pleasure Island, featuring adult nightclubs showcasing Disney's quality and creativity, to Walt Disney World Village on July 21, 1986. Construction began the following August and Pleasure Island was opened on May 1, 1989, the same day as the Disney's Hollywood Studios theme park. Later that year, the complex was renamed Disney Village Marketplace.[1]

In the mid-1990s, the growth of Walt Disney World created the potential for further expansion, leading to a $1 billion investment in projects across the resort.[2] On June 20, 1995, major enhancements and expansions were announced for the area, with the Disney Village Marketplace and Pleasure Island being combined into a newly branded district named Downtown Disney. The re-branding was introduced on September 7, 1997.[2] On September 15, Downtown Disney West Side, a 66 acres (27 ha) expansion, opened as a third shopping, dining, and entertainment area featuring more eclectic venues such as La Nouba (a permanent show which is part of Cirque du Soleil), DisneyQuest, and Tower Records (later a Virgin Megastore). Major changes to the complex also included the conversion of Mickey's Character Shop into the World of Disney, becoming the world's largest Disney store, in addition to the expansion and upgrade of the AMC Pleasure Island Theatres, as well as the opening of Rainforest Cafe and Planet Hollywood.[1][2] 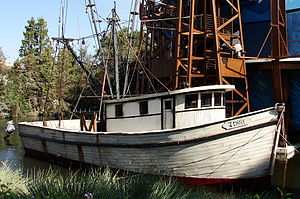 Pleasure Island's quality started to degrade after it became free to the public in 2004. On September 27, 2008, the Pleasure Island nightclubs closed to make room for new shopping and dining offerings.[1]

Renovation and renaming to Disney Springs

On March 14, 2013, Walt Disney Parks and Resorts chairman Tom Staggs announced that Downtown Disney would be redesigned as Disney Springs, a revitalized dining-retail-entertainment district inspired by Florida's waterfront towns. The expansion project will include 150 new tenants and the construction of two parking structures.[3] The Disney Springs will expand twice in size with Team Mickey and similar stores will grow with more merchandise. Popular stores like American Girl and Dior have been rumored to be placing locations at Disney Springs.[4] The renovation was described as an "exciting, multi-year transformation of Downtown Disney at the Walt Disney World Resort".[5] 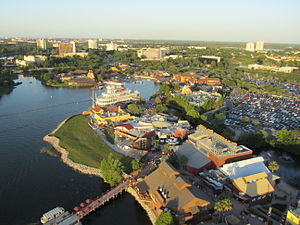 Common to other Disney theme park attractions, Disney Springs will offer a unique shopping and dining environment themed around an elaborate backstory and will feature the following areas:[6]

In order to facilitate the construction of the area and the increase in capacity, two large parking structures are under construction in previous parking lot areas, and the entire area is expected to be completed in 2016. Plans include for new bridges connecting the area to Disney's Saratoga Springs resort, and a new causeway connecting the Marketplace to The Landing. Furthermore, High Line structures will be built in order to provide both theme and shade.[6] The complex was renamed Disney Springs on September 29, 2015.[7]

The Marketplace houses many shops and restaurants. The first restaurant in the Earl of Sandwich chain is located here. T-Rex Cafe is a dinosaur-themed restaurant operated by Landry's Restaurants, which features life-sized animatronic dinosaurs developed by UCFab International, LLC. It is located at the site of a former valet parking traffic circle in the E parking lot, near the current location of the pedestrian bridge between Pleasure Island and Downtown Disney Marketplace and is adjacent to the Lego Imagination Center. Groundbreaking ran behind schedule, with construction beginning in October 2007 and completed in early October 2008, with its opening on October 14, 2008. Landry's Restaurants also operates Rainforest Cafe at this location. Small boat rentals for use on the waterway were offered by Cap'n Jack's Marina, which ceased operation in October 2013 as part of Disney Springs renovation plans.[8] As part of these plans, a walkway spanning the Village Lake and connecting Rainforest Cafe with the Lego Imagination Center - The Marketplace Causeway - was constructed and opened 2015.[9][10]

The Landing was formerly Pleasure Island, which was primarily a nighttime entertainment complex with two comedy clubs and four dance clubs. These clubs closed permanently on September 27, 2008. New shops and restaurants were planned to open to replace the closed clubs, but the economic recession of 2009 delayed plans. Only one new restaurant has opened to date. While the Marketplace and West Side have always been free to enter, Pleasure Island required the purchase of admission and was closed during the day. Beginning in summer 2004, Pleasure Island became free to enter, and only those guests entering the nightclubs were charged admission.

On November 18, 2010, Walt Disney World Resort announced a project named Hyperion Wharf, which was planned to replace the Pleasure Island complex. Pleasure Island would have undergone extensive renovations and re-theming to transform into the early twentieth century wharf-themed entertainment area. New shopping and dining locations would have also been added.[11] In July 2011, it was announced that these plans have been delayed.[12] These plans were later cancelled in favor of Disney Springs with the area currently known as Pleasure Island, along with part of the current parking lot, eventually becoming The Landing.[5] 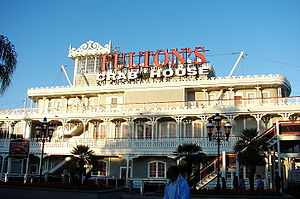 The structure originally known as the The Empress Lilly is a static full-size replica of a paddle steamer riverboat on Village Lake. It is 220 feet long and 62 feet wide. Though it resembles a boat, it is actually a boat-shaped building on a submerged concrete foundation.[13]

The Empress Lilly was designed by Walt Disney Imagineering to look as authentic as possible. The gingerbread scrollwork and stained-glass detailing hearkened back to the days of Mark Twain's Mississippi River. The paddlewheel at the aft end constantly churned, though the ship never moved. It greeted guests for the first time on May 1, 1976, when it was christened by Walt Disney's widow, Lillian Disney, for whom it was named. It originally housed four separate entertainment and dining areas:

The Empress Lilly was also one of the first locations of the famous Disney Character Breakfasts.

In the mid-1990s, as a cost-cutting move, Disney began to engage outside partners to take over operations of many of its restaurants. It was decided the Empress Lilly would come under new management, and Levy Restaurants signed a contract to operate the "ship" for 20 years.[13] On April 22, 1995, the Empress Lilly served her last meals. All interiors were subsequently ripped out and a new décor for a single restaurant put in place. The old smokestacks and paddlewheel were removed because they had rusted and rotted to a large extent; these were not replaced. The restaurant opened as Fulton's Crab House on March 10, 1996.[13] 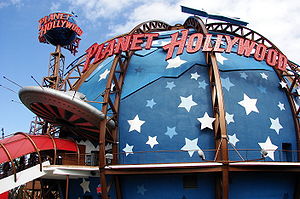 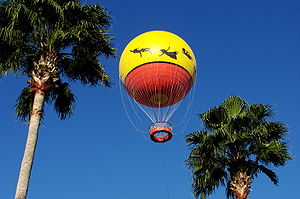 The Disney Springs West Side is home to many full service restaurants, large stores, and entertainment venues. On May 12, 2009, the Virgin Megastore closed permanently and was replaced by a Ridemakerz store. The Ridemakerz store later closed in favor of the existing store inside Team Mickey Athletic Club located in the Marketplace and was replaced by a Splitsville bowling alley.

Planet Hollywood opened on December 17, 1994. Jenny, the shrimping boat used in the 1994 film Forrest Gump, is located on the northwest corner of that restaurant.

Characters in Flight opened in Spring 2009 and features a giant tethered balloon that rises 400 feet, providing 360-degree views of the Downtown Disney area. It is operated by Aérophile and is similar to PanoraMagique located at Disney Village at Disneyland Paris. This Aéro30 balloon is custom-built and hand painted with classic flying Disney characters. It contains a 19-foot-diameter basket that holds 29 people and one pilot, and is purportedly the largest tethered helium balloon in the world.

Expansion of the existing AMC Theatres Pleasure Island 24 venue opened with Downtown Disney West Side in 1997. In late 2010, renovations began which created theaters offering food service. The complex was renamed AMC Downtown Disney 24. In 1997, there were plans to open a Planet Movies by AMC entertainment complex at this location by combining the Planet Hollywood restaurant with a re-branded AMC megaplex. However, these plans were abandoned due to Planet Hollywood's continued financial problems. The complex has now been renamed AMC Disney Springs 24.[14]