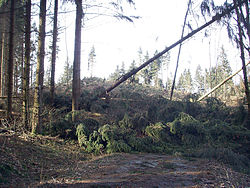 In biology, a disturbance is a temporary change in environmental conditions that causes a pronounced change in an ecosystem. Disturbances often act quickly and with great effect, sometimes resulting in the removal of large amounts of biomass. Major ecological disturbances may include fires, flooding, windstorms, insect outbreaks and trampling. Earthquakes, various types of volcanic eruptions, tsunami, firestorms, impact events, climate change, and the devastating effects of human impact on the environment (anthropogenic disturbances) such as clearcutting, forest clearing and the introduction of invasive species [1] can be considered major disturbances. Disturbance forces can have profound immediate effects on ecosystems and can, accordingly, greatly alter the natural community. Because of these and the impacts on populations, these effects can continue for an extended period of time.

Conditions under which natural disturbances occur are influenced mainly by climate, weather, and location.[1] Fire disturbances will only occur in areas where there is low precipitation, some form of ignition (typically lightning), and enough flammable biomass to allow spread. Conditions often occur as part of a cycle and disturbances may be periodic. Other disturbances, such as those caused by humans, invasive species or impact events, can occur anywhere and are not necessarily cyclic. Extinction vortices may result in multiple disturbances or a greater frequency of a single disturbance.

Often, when disturbances occur naturally, they provide conditions that favor the success of different species over pre-disturbance organisms. This can be attributed to physical changes in the abiotic conditions of an ecosystem in combination with reduced levels of competition. Because of this, a disturbance force can change an ecosystem for significantly longer than the period over which the immediate effects persist. However, in the absence of further disturbance forces, many ecosystems will trend back toward pre-disturbance conditions. Such alteration, accompanied by changes in the abundance of different species over time, is called ecological succession. Succession often leads to conditions that will once again predispose an ecosystem to disturbance.

Pine forests in the western North America provide a good example of such a cycle involving insect outbreaks. The mountain pine beetle (Dendroctonus ponderosae) play an important role in limiting pine trees like lodgepole pine in forests of western North America. In 2004 the beetles affected more than 90,000 square kilometres. The beetles exist in endemic and epidemic phases. During epidemic phases swarms of beetles kill large numbers of old pines. This mortality creates openings in the forest for new vegetation.[2] Spruce, fir, and younger pines, which are unaffected by the beetles, thrive in canopy openings. Eventually pines grow into the canopy and replace those lost. Younger pines are often able to ward off beetle attacks but, as they grow older, pines become less vigorous and more susceptible to infestation.[3] This cycle of death and re-growth creates a temporal mosaic of pines in the forest.[4] Similar cycles occur in association with other disturbances such as fire and windthrow.

When multiple disturbance events affect the same location in quick succession, this often results in a "compound disturbance," an event which, due to the combination of forces, creates a new situation which is more than the sum of its parts. For example, windstorms followed by fire can create fire temperatures and durations that are not expected in even severe wildfires, and may have surprising effects on post-fire succession.[5] 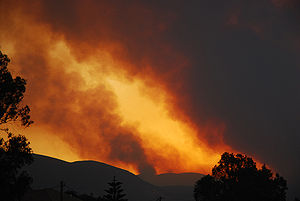 Forest fire burns on the island of Zakynthos in Greece on July 25th, 2007.

A disturbance may change a forests significantly. Afterwards, the forest floor is often littered with dead material. This decaying matter and abundant sunlight promote an abundance of new growth. In the case of forest fires a portion of the nutrients previously held in plant biomass is returned quickly to the soil as biomass burns. Many plants and animals benefit from disturbance conditions.[6] Some species are particularly suited for exploiting recently disturbed sites. Vegetation with the potential for rapid growth can quickly take advantage of the lack of competition. In the northeastern United States, shade-intolerant trees like pin cherry[7] and aspen quickly fill in forest gaps created by fire or windthrow (or human disturbance). Silver maple and eastern sycamore are similarly well adapted to floodplains. They are highly tolerant of standing water and will frequently dominate floodplains where other species are periodically wiped out.

Another species which is well adapted to a particular disturbance is the Jack Pine in boreal forests exposed to crown fires. They, as well as some other pine species, have specialized serotinous cones that only open and disperse seeds with sufficient heat generated by fire. As a result, this species often dominates in areas where competition has been reduced by fire.[8]

Species that are well adapted for exploiting disturbance sites are referred to as pioneers or early successional species. These shade-intolerant species are able to photosynthesize at high rates and as a result grow quickly. Their fast growth is usually balanced by short life spans. Furthermore, although these species often dominate immediately following a disturbance, they are unable to compete with shade-tolerant species later on and replaced by these species through succession.

While plants must deal directly with disturbances, many animals are not as immediately affected by them. Most can successfully evade fires, and many thrive afterwards on abundant new growth on the forest floor. New conditions support a wider variety of plants, often rich in nutrients compared to pre-disturbance vegetation. The plants in turn support a variety of wildlife, temporarily increasing biological diversity in the forest.[6]

Biological diversity is dependent on natural disturbance. The success of a wide range of species from all taxonomic groups is closely tied to natural disturbance events such as fire, flooding, and windstorm. As an example, many shade-intolerant plant species rely on disturbances for successful establishment and to limit competition. Without this perpetual thinning, diversity of forest flora can decline, affecting animals dependent on those plants as well.

A good example of this role of disturbance is in ponderosa pine (Pinus ponderosa) forests in the western United States, where surface fires frequently thin existing vegetation allowing for new growth. If fire is suppressed, douglas fir (Pesudotsuga menziesii), a shade tolerant species, eventually replaces the pines. Douglas firs, having dense crowns, severely limit the amount of sunlight reaching the forest floor. Without sufficient light new growth is severely limited. As the diversity of surface plants decreases, animal species that rely on them diminish as well. Fire, in this case, is important not only to the species directly affected but also to many other organisms whose survival depends on those key plants.[9]