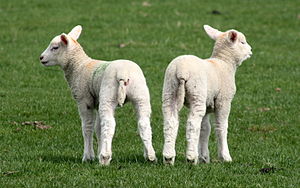 Two lambs having their tails docked by the use of rubber rings. The tight rubber rings block blood flow to the lower portion of the tail, which will atrophy and fall off.

Originally, most docking was done for practical purposes. For example, a large horse used for hauling large loads might have its tail docked to prevent it from becoming entangled in tow ropes or harness; without docking, it could be dangerous to the horse, painful if the tail were tangled, and inconvenient to the owner to tie up the horse's tail for every use. 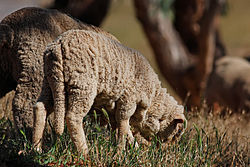 A lamb in Australia which, unusually, has not had its tail docked.

Tail docking may be performed on livestock for a variety of reasons:

While tail docking is an effective preventive method in some cases, if it is not carried out correctly it may result in other problems such as ill thrift[3] or rectal prolapse. In lambs, tail docking at the distal end of the caudal folds tends to minimize docking effects on incidence of rectal prolapse.[4] Docking at that length has been recommended by the American Veterinary Medical Association.[5] In the UK the law states that for sheep docked tails should at a minimum cover the anus in male lambs, and the vulva in female lambs.[6] These minimum lengths are also recommended in Canada[7]

Depending on the animal and the culture, docking may be done by cutting (knife or other blade), searing (gas or electrically heated searing iron), or constriction methods, i.e. rubber ring elastration.[1] The Canadian Veterinary Medical Association indicates that pain, stress, recovery time and complications associated with docking of livestock will be minimized by docking when animals are under one week of age.[8] However, docking of lambs within 24 hours of birth is not recommended, as it may interfere with ingestion of colostrum and/or formation of the maternal bond.[9] In the UK the law requires that docking on sheep using constriction methods must be performed within the first week of the animal's life.[10] The UK Farm Animal Welfare Council has noted that this limitation can be problematic in management of hill flocks where normal practice is to handle lambs as little as possible during the first week "to avoid mis-mothering, mis-adventure and injury."[9]

Tail docking of dairy cows is prevalent in some regions. Some anecdotal reports have suggested that such docking may reduce SCC (somatic cell counts in milk) and occurrence of mastitis. However, a study examining such issues found no significant effect of docking on SCC or mastitis frequency or on four measures of cow cleanliness.[11] Although it has been suggested that leptospirosis among dairy farm workers might be reduced by docking cows' tails, a study found that milkers' leptospiral titers were not related to tail docking.[12] The American Veterinary Medical Association opposes "routine tail docking of cattle."[13] Similarly, the Canadian Veterinary Medical Association opposes docking tails of dairy cattle.[14] 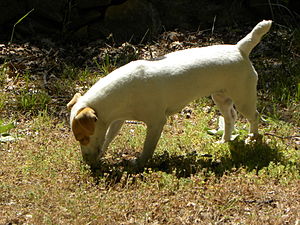 As with other domesticated animals there is a long history of docking the tails of dogs. It is understood to date at least to the Roman Empire. The most popular reason for docking dog breeds is to prevent injury to working dogs. In hunting dogs, the tail is docked to prevent it from getting cut up as the dog wags its tail in the brush. This is contested by a wide range of groups[15] and is sometimes considered a form of animal cruelty.[16] This has led to the practice being outlawed and made illegal throughout many countries, in some of which dogs are no longer bred for work, or used as working animals.

For example, in United Kingdom tail docking was originally undertaken largely by dog breeders. However, in 1991, the UK government amended the Veterinary Surgeons Act (1966),[17] prohibiting the docking of dogs' tails by lay persons from 1 July 1993.[18] Only veterinary surgeons were, by law, allowed to dock. However, following the passage of the law, the Council of the Royal College of Veterinary Surgeons in November 1992, ruled docking to be unethical, "unless for therapeutic or acceptable prophylactic reasons". The requirement in which the Royal College considers prophylactic docking to be acceptable are so strict as to make the routine docking of puppies by veterinary surgeons extremely difficult. Vets who continue to dock risk disciplinary action, and can be removed from the professional register. Those found guilty of unlawful docking would face a fine of up to £20,000, up to 51 weeks imprisonment or both. They can only dock the tail of "working" dogs (in some specific cases) - e.g. hunting dogs that work in areas thick in brambles and heavy vegetation where the dog's tail can get caught and cause injury to the dog. Docking was banned in England and Wales by the Animal Welfare Act 2006 and in Scotland by the Animal Health and Welfare (Scotland) Act 2006.

In 1987 the European Convention for the Protection of Pet Animals, established by Council of Europe, prohibited docking for non-medical reasons, though signatory countries are free to opt out of this provision, and almost half of them have done so. Norway completely banned the practice in 1987[citation needed]. Other countries where docking is banned include Australia[19] and the United Kingdom.[20] 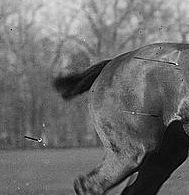 Docked and banged tail on a polo pony, photographed between 1910 and 1915

In modern use, the term usually does not refer to tail amputation as it does with some dog breeds. However, historically, docking was performed on some horses, often as foals. The practice has been banned in some nations, but is still seen on some show and working draft horses in some places, and is practiced at some PMU operations.[21]

In modern times, the term "docked" or "docking" in reference to the tail of a horse generally refers to the practice of cutting the hair of the tail skirt very short, just past the end of the natural dock of the tail. In particular, the tail is often cut short to keep it from being tangled in a harness.

Cattle on large Australian cattle stations often have the tail brush (not the dock) cut shorter (banged) before their release; this "bang-tail muster" indicates those having been counted, treated, their current pregnancy status determined, etc.

Tail docking of cows in the dairy industry is banned in several European countries (the Netherlands, Norway, Sweden, Switzerland, and the United Kingdom) as well as in three states in the U.S. (California, Rhode Island, and Ohio). Several industry organizations (such as the American Veterinary Medical Association, Canadian Veterinary Medical Association, Milk & Dairy Beef Quality Assurance Center, National Milk Producers Federation, California Dairy Quality Assurance Program, and American Association of Beef Practitioners) oppose the practice, making the argument that there is not substantial scientific evidence to support the claims that docking improves cleanliness of the animal, udder health, milk quality, and worker health. Rather, solutions to these problems are better solved by taking into account factors such as the individual animal's behavior, their housing, handling, and facility management. As well, concerns about disease transmission should be addressed by preventing disease occurrence in the first place. Scientific studies have demonstrated that there are numerous animal welfare issues with this practice (such as distress, pain, increased activity in pain receptors in the tail stump, abnormal growths of nerve fibers, sensitivity to heat and cold, and clostridial diseases). Fortunately, there is an effective and humane alternative to tail docking, which is switch trimming.[22]