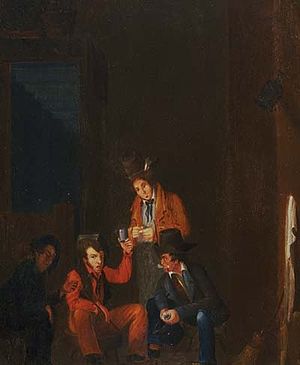 Dominique You or Youx (born Frederic You or Youx, ca. 1775, Sète, France - died November 15, 1830, New Orleans, Louisiana) was a privateer, soldier, and politician.

According to information he provided to his masonic lodge in New Orleans, he was born in Cette (now Sète) in Languedoc, France. [1] (Contrary to the spurious Diary of Jean Laffite, he was not the older brother of Pierre and Jean Laffite.) You may have joined the army of Revolutionary France as an artillerist. He served in the French Republic's artillery corp. In 1802 he accompanied General Charles Leclerc to Saint-Domingue to quell Toussaint Louverture's slave revolt. Yellow fever took the lives of many of the French soldiers including General Leclerc.

Afterwards, Dominique You went to New Orleans where he joined Jean Lafitte and Pierre Lafitte and became the captain of the French corsair Le Pandoure. He was nicknamed "Captain Dominique" by the French and "Johnness" by the Americans. He acquired a reputation for being very bold and daring. During the next few years he and the Lafitte brothers became successful smugglers in the Louisiana bayous. As privateers, they preyed on Spanish ships in the Gulf of Mexico, doing extensive damage to Spanish commerce. On one occasion, a hurricane in the Gulf of Mexico caused severe damage to the Pandoure and almost killed Captain You.

In July 1814, Dominique You was falsely convicted of piracy in the Gulf, but the Americans failed to capture him. He was in the camp at Barataria when it was raided by U.S. forces that year; he was captured and imprisoned along with other Baratarians.[2] Jean Lafitte offered to help General Andrew Jackson defend New Orleans against the impending British invasion, in exchange for his crew and a pardon; and You was released. He was appointed commander of a company of artillery, which was composed of the Baratarians' best gunners. His men fought with such courage and effectiveness in the Battle of New Orleans on January 8, 1815, that they were mentioned in Major General Andrew Jackson's general order of January 21 as "having shown uncommon gallantry and skill in the field."

As a result of this success, all charges against the Baratarians and Dominique You were dropped. After the battle, You settled quietly in New Orleans where he became a politician and supporter of Andrew Jackson. You died in New Orleans in 1830. He was given a military funeral, paid for by the public.

His grave is found in the historic New Orleans St. Louis Cemetery Number 2. It grave bears a verse from the Henriade of Voltaire, an expressive tribute to an honored fighting man, which clearly conveys his place as patriot, privateer, and loyal friend:

"Fearless warrior on land and on wave
In a hundred fights he showed his worth
And this new Bayard, righteous and brave
Could watch without trembling the end of the Earth."