The Domus Sanctae Marthae (Latin for Saint Martha's House; in Italian, Casa Santa Marta) is a building adjacent to St. Peter's Basilica in Vatican City. Completed in 1996, during the reign of Pope John Paul II, it is named after Saint Martha the hospitable, who was a sibling to Saints Mary and Lazarus of Bethany. The building presently functions as a guest house for various clergy having business with the Holy See, and as the hotel residence of the members of the College of Cardinals when they are participating in a Papal Conclave to elect a new Pope.

Pope Francis made it both his leisure and residential home upon his election in 2013 and occupies a bedroom furnished with basic necessities, a wooden standing Crucifix, along with a petite statue of Our Lady of Luján, the Marian patroness of Argentina, Uruguay, and Paraguay. Outside the Papal bedroom are two Pontifical Swiss Guards guarding the vicinity, operating day and night shifts.

Pope John Paul II, after participating in two conclaves, decided to make the process more comfortable and less strenuous on the elderly cardinals, and commissioned the construction of Domus Sanctæ Marthæ. He specified it would serve for conclaves and "ecclesiastical personnel serving at the Secretariat of State and, as far as possible, at other Dicasteries of the Roman Curia, as well as to cardinals and bishops visiting Vatican City to see the Pope or to participate in events and meetings organized by the Holy See."[1] Laymen have stayed there as well.[2]

Italian environmental groups, joined by Italian politicians, protested against the construction because it would block the view of St. Peter's Basilica enjoyed from some nearby apartments. The head of the Vatican's Department of Technical Services contended that it would be lower in height than many neighborhood buildings and rejected challenges to the Vatican's right to build within its borders.[3]

The hotel cost $20 million, with $13 million initially pledged by Pittsburgh, Pennsylvania, casino owner John E. Connelly, who later received a contract to sell copies of Vatican art in the United States. Connelly did not fulfill his initial financial commitment after his business encountered financial setbacks. His art contract was also rescinded after he failed to extend his marketing efforts beyond Pittsburgh.[4] Connelly proposed Louis D. Astorino, a Pittsburgh-based architect, to design the building. When his design was rejected, Astorino remained as supervisory architect and designed the adjacent Chapel of the Holy Spirit.[5] The chapel occupies a site between the Leonine Wall and the guesthouse proper.[6]

The five-story building contains 106 suites, 22 single rooms and one apartment. It is run by the Daughters of Charity of Saint Vincent de Paul.[1] Its amenities include furnished bedrooms, lavatories, and studies for each occupant. Dining facilities and personal services are also offered. Mary Ann Glendon, U.S. Ambassador to the Holy See from 2008 to 2009, described the accommodations as "comfortable, but by no means deluxe".[2]

Pope Leo XIII had the St. Martha Hospice built in 1891, on the site now occupied by the Domus, when it was feared that the cholera epidemic of that time might reach Rome. After it did not, the building was used to provide services to the sick of Rome's Borgo and Trastevere neighborhoods and as a hospice for pilgrims. Electricity was provided in 1901, and a chapel added in 1902. Medical services expanded to cover priests and Swiss Guards. During World War II the building was used by refugees, Jews, and ambassadors from countries that had severed diplomatic relations with Italy.[7] At the end of the war, Pope Pius XII greeted 800 Roman children who breakfasted at St. Martha Hospice after receiving their First Communion.[8] It served as a home where senior clerics could live their last years.[9] Increasingly it served as a residence for clerics assigned to Vatican offices.[7]

Prior to the Apostolic Constitution Universi Dominici gregis promulgated on February 22, 1996, that changed the rules governing papal conclaves, conclave participants slept in the Apostolic Palace, the official residence of the Pope, on cots usually borrowed from seminaries in Rome. After participants were sealed there under lock and key, the electors lived in makeshift rooms built throughout the palace, some within hallways and offices. The rooms, assigned to each cardinal by lot, were often divided from one another by a sheet hanging on a rope. Each room was equipped with a crucifix and prie-dieu, a desk, and one or two chairs. The cardinals shared common bathrooms, often with ten cardinals assigned to each. The situation was especially difficult for the elderly among them.

As with previous practice, the cardinal electors were assigned rooms by lot. All radios, television sets and telephones were disconnected, in accordance with regulations which call for the cardinals to be secluded from the outside world. 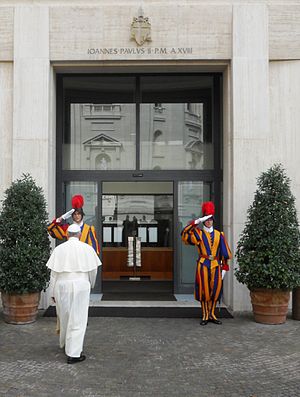 On March 26, 2013, the Vatican announced that Pope Francis would not move into the papal apartment in the Apostolic Palace, but would instead use Suite 201 of Domus Sanctae Marthae, after first remaining in the room he was assigned by lot at the start of the conclave that elected him.[12]

Pope Francis is the first pope not to live in the Papal Apartments on the third floor of the Apostolic Palace since Pope Pius X occupied them in 1903. He uses the palace suite there as his office. He sleeps, says morning Mass, and takes communal meals in Domus Sanctae Marthae.[12] Pope Francis explained his decision in an interview with the Italian journal Civiltà Cattolica, saying "The residence in the Apostolic Palace is not luxurious. It is large and made with good taste, but not luxurious. But in the end it is like a funnel turned upside down. It is large, but the entrance is narrow. Only one person at a time can get in and I cannot live alone. I must live my life with others."[13]