Donald Ainslie Henderson (born September 7, 1928), known as D. A. Henderson, is an American physician, educator, and epidemiologist who directed a 10-year international effort (1967–77) that eradicated smallpox throughout the world and launched international childhood vaccination programs. From 1977 to 1990, he was Dean of the Johns Hopkins School of Public Health.[1] Later, he played a leading role in instigating national programs for public health preparedness and response following biological attacks and national disasters.[2] Presently, he is Professor and Dean Emeritus of the Johns Hopkins Bloomberg School of Public Health, and Professor of Medicine and Public Health at the University of Pittsburgh, as well as Distinguished Scholar at the UPMC Center for Health Security.[3][4]

Henderson was born in Lakewood, Ohio, of Scotch-Canadian immigrant parents. His father, David Henderson, was an engineer; his mother, Eleanor McMillan, was a nurse. His interest in medicine was inspired by a Canadian uncle, William McMillan, who was a general practitioner and senior member of the Canadian House of Parliament.[5] 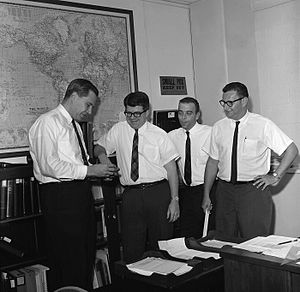 Henderson (first man on left) as part of the CDC's smallpox eradication team in 1966.

Henderson graduated from Oberlin College in 1950 and received his MD from the University of Rochester School of Medicine in 1954. He was a resident physician in medicine at the Mary Imogene Bassett Hospital in Cooperstown, New York, and, later, a Public Health Service Officer in the Epidemic Intelligence Service of the Communicable Disease Center (now the Centers for Disease Control and Prevention [CDC]). He earned an MPH degree in 1960 from the Johns Hopkins School of Hygiene and Public Health (now the Johns Hopkins Bloomberg School of Public Health).[5]

Henderson served as Chief of the CDC virus disease surveillance programs from 1960 to 1965, working closely with the inspirational epidemiologist Dr. Alexander Langmuir. During this period, he and his unit developed a proposal for a United States Aid for International Development (USAID) program to eliminate smallpox and control measles during a 5-year period in 18 contiguous countries in western and central Africa.[6] This project was funded by USAID, with field operations beginning in 1967.[5]

The USAID initiative provided an important impetus to a World Health Organization (WHO) program to eradicate smallpox throughout the world within a 10-year period. In 1966, Henderson moved to Geneva to become director of the campaign. At that time, smallpox was occurring widely throughout Brazil and in 30 countries in Africa and South Asia. More than 10 million cases and 2 million deaths were occurring annually. Vaccination brought some control, but the key strategy was "surveillance-containment." This technique entailed rapid reporting of cases from all health units and prompt vaccination of household members and close contacts of confirmed cases. WHO staff and advisors from some 73 countries worked closely with national staff. The last case occurred in Somalia on October 26, 1977, only 10 years after the program began.[5] Three years later, the World Health Assembly recommended that smallpox vaccination could cease. Smallpox is the first human disease ever to be eradicated.[7] This success gave impetus to WHO’s global Expanded Program on Immunization, which targeted other vaccine-preventable diseases, including poliomyelitis, measles, tetanus, diphtheria, and whooping cough.[8] Now targeted for eradication are poliomyelitis and Guinea Worm disease; after 25 years, this objective is close to being achieved.[9]

From 1977 through August 1990, Henderson was Dean of the Johns Hopkins School of Public Health. In 1991, he was appointed associate director for life sciences, Office of Science and Technology Policy, Executive Office of the President (1991–93) and, later, deputy assistant secretary and senior science advisor in the Department of Health and Human Services (HHS).[5] In 1998, he became the founding director of the Johns Hopkins Center for Civilian Biodefense Strategies, now the UPMC Center for Health Security.[3]

Following the September 11, 2001, attack on the World Trade Center, HHS Tommy G. Thompson asked Henderson to assume responsibility for the Office of Public Health Preparedness (later the Office of the Assistant Secretary for Preparedness and Response).[10][11][12] For this purpose, $3 billion was appropriated by Congress.[5]