This article is about the library in San Jose, California. For others, see Martin Luther King Jr. Library (disambiguation).

The Dr. Martin Luther King Jr. Library (also known locally as the MLK Library) is a 136 foot (41 m)[1] tall public library in downtown San Jose, California, which had its grand opening on August 16, 2003.[2] As of 2007[update], it is the largest library building in the western United States built in a single construction project, with over 475,000 square feet (44,000 m²) of space on eight floors and approximately 1.6 million volumes. The King Library is a collaboration between the City of San José and San José State University: it is the main library for both San José State University and the San José Public Library system. On its tenth anniversary in 2013 it was still the largest joint university-municipal library in the United States.[2]

The Library building can accommodate over 2000 visitors. 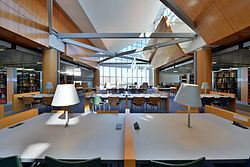 Interior of the 8th floor

Special collections within the library include, all on the 5th floor, the Ira F. Brilliant Center for Beethoven Studies, the Martha Heasley Cox Center for Steinbeck Studies, a California History Room, the SJSU Special Collections & Archive. There is also the Dr. Martin Luther King, Jr. Civil Rights Collection on the 3rd floor.

The lower level (below floor 1) provides public computers, magazines and government documents. The reference collections are on floor 2. The volumes of the City Library system are shelved on floor 3. There, the non-fiction are indexed via the Dewey Decimal Classification and the fiction are sorted alphabetically by author's last name. The volumes of the University Library (known also as the Research Collection) are shelved in floor 6 to 8 and are indexed via the Library of Congress Classification. Some duplicate volumes exist in each of the two systems.

The center of the building is known as the Koret Atrium. On floor 1, in the atrium, a large LED display shows in real time the number of item loans (books and other media such as CDs and DVDs) that the entire City Library System has made since 2000. As of May 2016, that display showed a figure of over 177 million.

The lower level, second and third floors are where the majority of the public computers are located.

The fourth floor is dedicated to visitors with their laptops, and the lower floors provide large round tables for people to meet at. All floors except floor 1 provide individual alcoves for students or members of the public who are engaged in research for their studies. Floors 6 and 8 are labeled as "quite study floors" and floor 7 is labeled as "silent study floor".

After the Library is closed for the day to the public, it remains open to SJSU students for "extended study hours". These extended hours include currently enrolled SJSU students, staff and faculty must show their current SJSU Tower Card. Students from other approved local institutions of higher education (Evergreen Valley College, Foothill College, De Anza College, San Jose City College, and West Valley College) must show their current college ID card to stay in the building during extended hours.[3]

The Library is a major nexus point for student life at SJSU. Students often arrive with their laptops and engage in study groups both at tables and in study rooms.

The Library staff include Library Security Officers, some of whom carry body worn video cameras while patrolling the floors. Offices are posted at the entrances to the Library on the first floor and they regularly patrol floors 1 to 3. Any person suspected of "library theft" is subject to detention as per the California Penal Code 490.5.[4] Sleeping is permitted on the furniture but not at the public computers. Backpacks and other bags must be kept out of the way other others, such as at the confined spaces of the public computer areas. The regular security staff is supplemented by staff from CSC (Contemporary Services Corporation), who monitor floors 2 and 3.

Security announcements, such as to evacuate the Library, sound throughout the central Atrium to all eight floors and via per-floor loudspeakers. There have been security incidents in 2015 and 2016 at the library where Library Security Officers and the SJSU Police have performed their function properly.[5][6] Evacuations occur, on average, a few times per year.

In the Koret Atrium, there is a kiosk of eight public computers with Internet access on floor 1 are configured so that computer use is limited to 15 minutes per person and does not require a library card. A queue to stand in line is set up for visitors for these terminals. A mat marks the start of the queue with the words "LINE FORMS HERE".

The lower level provides about 20 public computers. Floors 2 and 3 provide about 50 public computers on each of these two floors. Login to each the public computers except those on floor 1 requires 14-digit Library card number and PIN and to press the "Login" button. A program called "LIBRARY LOGIN" regulates the public computer login and session access time. Access time is nominally limited to 2 hours per day per City Library card. At the end of the 2 hour session, if less than 90% of the public computers are busy, which is often the case, then the user is granted another hour of session time and this repeated granting can and often does continue as long as the library remains open for that day. The login seeeions of public computer users are automatically terminated when the library closes to the public. The main Library is open seven days a week while the branches are closed on Sunday.

All floors are equipped with Wi-Fi service, and using that service requires a city 14-digit library card number and PIN be provided at web browser login.[8] The public, unencrypted SSID is "King_Library_WIFI". A City Library card can be obtained for free with legal ID, such as a drivers license, at the first floor King Circulation Desk.

The Library and the Grace Community Center six short blocks away on 10th Street are two of the few places in downtown San Jose where, every day, one can go and visit inside without being expected to spend money.[10] When open, each are frequented by some of the homeless.[11][12] Nearby St. James Park is another visible gathering point for the homeless.

Fall and death of visitor

On January 11, 2016 at around 3 p.m. local time, a man fell from the sixth floor of the interior Koret Atrium to the ground floor of the Atrium and died. He was determined to be a member of the public, rather than a member of the University. The library was evacuated and re-opened the next morning.[13][14]