Drama in the Desert

From Infogalactic: the planetary knowledge core
Jump to: navigation, search
This is an InfoGalactic original article.
Not to be confused with desert drama at Burning Man.

Drama in the Desert, (shortened from "Drama In The Desert: The Sights And Sounds Of Burning Man"), is a coffee table art book featuring Holly Kreuter's photography along with recent cultural art history in a documentary DVD featuring her photos with additional video footage set to an original music score, documenting the arts, festivities, life, and culture from 1995-2001 of the Burning Man annual one-week event, set in the temporary autonomous Black Rock City, in Nevada's Black Rock Desert.[2]

Burning Man started in 1986 at San Francisco's Baker Beach every summer solstice, starting with just a 10 foot figure and 100 people. In 1991 the annual gathering had grown so large the police forbid burning the effigy so the week before the Labor Day holiday they relocated to the desolate Black Rock Desert far past Reno, Nevada (locate: Black Rock City on OpenStreetMap). The desolation only decreased the numbers the first few years as the annual event kept growing with a notable surge of awareness after a 1996 Wired Magazine article. In 1998 the Burning Man Organization tried a different desert's playa, otherwise, the other years were on the Black Rock Desert playa. In 1999 the population was about 19 thousand people, doubling a few years later. Holly Kreuter's photographs document the history and art of Burning Man from 1995 to 2001, marking the noticeable evolution (or devolution) from fire play and drum circles to a predominance of glow sticks, light grids, and psy trance. 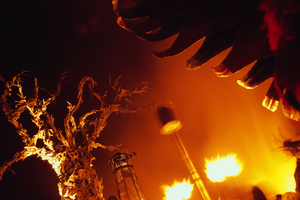 All photographs are by Holly Kreuter, except 3, on page 143 (the second last page), by estranged Burning Man co-founder Jerry James - the only photos in existence of "The First Burning Man" ©1986, depicting: 1) a 10 foot wood figure (with hands on hips) leaning against a van, 2) the "man" effigy (with hands on hips), prepped and freestanding at dusky sunset on San Francisco's Baker Beach, ready to burn, and 3) the man ablaze.[3]

Many of the founding Burning Man participants were members of the Cacophony Society, a group of pranksters, activists, clowns, rebels, free thinkers, and radically fun people. Holly Kreuter was associated with these folks and she was also employed by the Burning Man Organization for a while, working under Harley, one of the LLC members, who managed much of the city infrastructure. 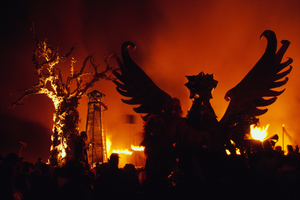 A Drama in the Desert image,
Holly Kreuter photo of the Light House, Bone Tree, Phoenix, and distant fire play at Burning Man 1999.

Holly's connection to the BMorg made her familiar with some legal issues of Burning Man. Burning Man is a very protective non-commercial non-exploitable brand, so much so that the event does not even allow any vending or advertising, and commercial branding is covered as much as possible (ie. rental trucks with large panel logos). The "Burning Man" name and )'( logo, as well as the legal entity "Paper Man", are all actively protected trademarks and intellectual properties. The year or two before Drama in the Desert was published, another bootleg Burning Man photography art book was problematically published in Japan beyond the American BMorg's legal reach. Knowing this, Drama in the Desert was the non-controversial title chosen, and only near completion Holly approached the 6 LLC members and BMorg for permission to use "Burning Man" in the extended full title. Since then it's been available for sale at the official Burning Man Marketplace website, where there are now more to choose from.

"Drama in the Desert: The Sights and Sounds of Burning Man" is a coffee table art book featuring Holly Kreuter's photography along with a DVD featuring her photos with additional video footage set to original music documenting the arts, festivities, life, and culture of the Burning Man event set in the temporary autonomous Black Rock City, in Nevada's Black Rock Desert, for one week every year. (10-ISBN 0972178902 & 13-ISBN 9780972178907)

While the 560 photos were taken in the Nevada deserts and 42 contributors lived near and far, book and DVD production occurred in San Francisco or the Bay Area with an estimated budget of $250,000.[2] 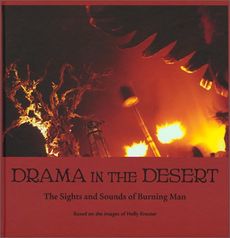 Dave Eggers, prolific author of the best-selling memoir A Heartbreaking Work of Staggering Genius and many other works, founder of McSweeney's, a co-founder of the 826 Valencia literacy project and pirate supply store - Eggers also wrote the foreword for Drama in the Desert.[4]

Daniel Terdiman, writer for TIME magazine, The New York Times, WIRED magazine, etc., and author of The Entrepreneur's Guide to Second Life: Making Money in the Metaverse (ISBN 0470179147), helped on the Drama in the Desert project.[4]

Chris Taylor (journalist), writer for TIME magazine, The Daily Blah, etc., and author of 2014's How Star Wars Conquered the Universe: The Past, Present, and Future of a Multibillion Dollar Franchise (ISBN 1480532525), helped on the Drama in the Desert project.[4]

A long tedious process that took months, all photographed slide film images were digitally scanned, then retouched in Photoshop to remove dust, straighten horizons, and crop when necessary. Lisa who designed the book and its layouts, may have further processed the images.

The book's images range from scenic stark desert vistas to festive action shots, day and night. While many folks may be scantily clothed for hot desert weather there are only 2 maybe 3 tasteful photos where genitalia may be seen within the greater context of the captured moment. No drugs are depicted. This book is safe for most families. Burning Man is so much more than what mainstream corporate media sensationally conveys.

Oops, dark images... The Drama in the Desert book was printed in Singapore using brighter inks (illegal in the USA). When Holly and Lisa proofed the images in Singapore the printing factory lights were very bright so the book, while great, is darker than intended and best viewed under brighter light.[5] 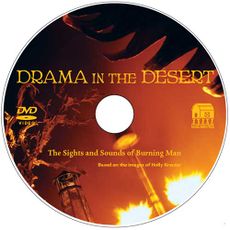 A Drama in the Desert DVD,
with the same book cover image,
photo by Holly Kreuter of the Light House, Bone Tree, Phoenix, and distant fire play, at Burning Man 1999.

After he'd recently left employment with Adobe to establish a new high-tech underwater video business, while recovering from heart surgery, Michael Lazar helped on the Drama in the Desert project by creating the DVD menu interfaces, coding the DVD authoring, and mastering the multi-level DVD for publishing.[7]

All editing was done with Final Cut Pro on Apple Mac computerss. Jason Carswell (and maybe some others) also used After Effects.

Not credited in the book yet according to the Internet Movie Database IMDb (where info is added without dates), Rik Walters was a digital effects artist on Days 3 & 4, presumably working with Justin Dossetti.[8] (Sadly Jason Carswell doesn't recall Rik Walters (or half the full production credits listed below 15+ years later), yet might remember with an anecdote or by seeing his face.)

Wrapped up deep in music and thought, editing at Holly's place, Jason "Sunshine" Carswell heard and felt a rumbling like a loud large truck lumbered by outside on Page Street near Steiner. Usually this would have been unnoticed and forgotten but for the movement just in his periphery. A drooping printer cable from his editing desk to a side table swayed back and forth - and not from an open window breeze. Only then did Jason realize he was experiencing his first waking earthquake of any magnitude and finally felt his chair take on a life of its own. A few things shifted enough and fell from the unpredictable sway and rumble. Jason didn't know any safety protocols but quickly decided not to fear the quake but embrace the wild ride and before he'd finished this thought the half minute ride had begun fade.

Dave Skaff became busy and did not finish Day/Night 6, the Saturday and night of the burn, so Jason "Sunshine" Carswell finished it, not credited until now. Unfortunately the pressed DVD audio track was not synced to the video so many dynamic moments are less so. Jason Carswell seems to be the only editor cutting to musical cues.

Oops, audio/visual unsynchronised... Unfortunately the multi-layer DVD process required making a data tape that was not reviewed until it was too late. Some "day/night" videos were designed to sync with the audio but were published out of sync. For example, the day/night 6 fireworks scenes would have greater impact viewed with a proper sync.[5]

The promotional trailers sample video, images, and music from the 74 minute feature:

Music for Drama in the Desert 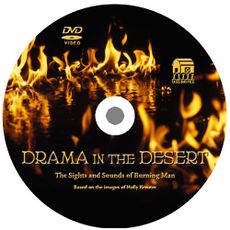 Music for Drama in the Desert, a CD of Sean Abreau's eclectic musical score
photo by Holly Kreuter, of a close up of Kiki's Fire Fountain.

Music for Drama in the Desert, composed, performed, and recorded by Sean Abreau, this soundtrack musical score CD was additionally published containing the 12 eclectic and diverse stereo audio tracks on the DVD, but released separately from the book-DVD combo.

From the back of the CD case: 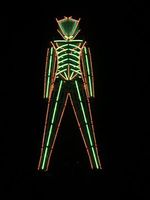 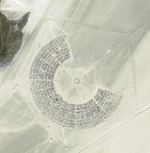 Production Credits, fully listed on the last 144th page of the book,[9][10] (not to be confused with the entire back cover of the book, in small print, listing hundreds of Burning Man artists featured and people helped or contributed on the Drama in the Desert project).

+ Indicates listings not in the book but archived on the website.

The book launch party was nice but forgettable, in a fancy place that didn't merit the expense nor match the San Francisco counterculture community that published the project, allegedly with important people there that were never met. Except one... Wavey Gravy, was there, one of the last famous hippies (beatnik?, Dead head?) alive.

NOTE re: absent or lack of citations: This Infogalactic article was started by User:JasonCarswell, (who worked on the book and directed half of the DVD segments), who also contributed much of the IMDb information mirrored and/or cited here. All other mirrored IMDb information will be credited or is uncopyrighted data (statistics, not sentences or paragraphs). That said, the majority of this article comes either from first hand experience, the archived website, or the book, DVD, CD and packaging itself.