The Duke of Swabia was the rulers of the duchy of Swabia and became the last great house of German Emperors, the Hohenstaufen.[1] Swabia was one of the five stem duchies of the medieval German kingdom, and its dukes were thus among the most powerful magnates of Germany. The most notable family to hold Swabia were the Hohenstaufen, who held it, with a brief interruption, from 1079 until 1268. For much of this period, the Hohenstaufen were also Holy Roman Emperors. With the death of Conradin, the last Hohenstaufen duke, the duchy itself disintegrated, although King Rudolf I attempted to revive it for his Habsburg family in the late-13th century. 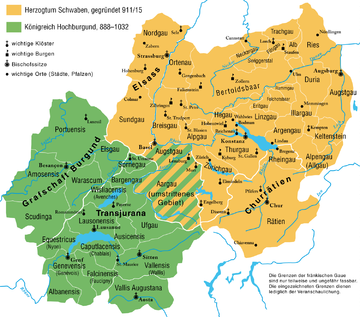 Map of the duchy of Swabia in the tenth and eleventh centuries (Swabia is marked in yellow; the kingdom of Upper Burgundy is green).

In the 13th century, the Duchy of Swabia disintegrated into numerous smaller states. Some of the more important immediate successor states were:

During the following century, several of these states were acquired by the County of Württemberg or the Duchy of Austria, as marked above. In 1803 Bavarian Swabia was annexed by Bavaria and shortly afterwards became part of the Kingdom of Bavaria.