Dunadd, (Scottish Gaelic Dùn Ad, 'fort on the [River] Add'), is an Iron Age and later hillfort near Kilmartin in Argyll and Bute, Scotland and believed to be the capital of the ancient kingdom of Dál Riata.[1]

Dunadd is a rocky crag that may have been one time an island and now lies inland near the River Add, from which it takes its name, a little north of Lochgilphead (NR 836 936). The surrounding land, now largely reclaimed, was formerly boggy and known as the Mòine Mhòr 'Great Moss' in Gaelic. This no doubt increased the defensive potential of the site.[2] 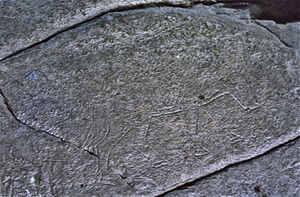 Pictish type boar carving in rock near the top of the hill.

Originally occupied in the Iron Age, the site later became a seat of the kings of Dál Riata. It is known for its unique stone carvings below the upper enclosure, including a footprint and basin thought to have formed part of Dál Riata's coronation ritual. On the same flat outcrop of rock is an incised boar in Pictish style, and an inscription in the ogham script. The inscription is read as referring to a Finn Manach and is dated to the late 8th century or after.[3]

Dunadd is mentioned twice in early sources. In 683 the Annals of Ulster record: "The siege of Dún At and the siege of Dún Duirn" without further comment on the outcome or participants. In the same chronicle the entry for 736 states: "Aengus son of Fergus, king of the Picts, laid waste the territory of Dál Riata and seized Dún At and burned Creic and bound in chains two sons of Selbach, i.e. Donngal and Feradach."[4]

The site was occupied after 736, at least into the 9th century. It is mentioned twice in later sources, suggesting that it retained some importance. In 1436, it is recorded that "Alan son of John Riabhach MacLachlan of Dunadd" was made seneschal of the lands of Glassary; the chief place of residence of the MacLachlans of Dunadd lay below the fort. In June 1506, commissioners appointed by James IV, including the earl and bishop of Argyll, met at Dunadd to collect rents and resolve feuds.[5]

The site is an Ancient Monument, under the care of Historic Scotland, and is open to the public (open all year; no entrance charge).

Because Dunadd is mentioned in early sources, and is readily identifiable, it has been excavated on several occasions (1904–05, 1929, 1980) and has one of the most important ensembles of finds from any early medieval site in Scotland. Finds range from the 6th to the 8th centuries AD. These include tools, weapons, quernstones, imported pottery and motif-pieces and moulds for the manufacture of fine metalwork (especially jewellery).[6]

In Rosemary Sutcliff's 1965 novel The Mark of the Horse Lord the Dal Riada undergo an internal struggle for control of royal succession, with Dun Monaidh central to the conflict, including a depiction of royal coronation and use of carved footprint. Dunadd is the location for Claire R. McDougall's novel "Veil of Time," in which a modern day woman is transported back to Dunadd's heyday in the 8th century. All the features of Dunadd, including the footprint, the boar, the well and the tumble down ruins are features of the story, as are the modern farm and cottages . Other ancient sites in the Kilmartin Valley also play a part in the narrative.