Dutch Brazil, also known as New Holland, was the northern portion of Brazil, ruled by the Dutch during the Dutch colonization of the Americas between 1630 and 1654. The term "New Holland" should not be confused with the later term for present-day Western Australia. The main cities of the Nieuw Holland were the capital Mauritsstad (today Recife), Frederikstadt (João Pessoa), Natal (the ancient Nieuw Amsterdam before establishing the location at present-day New York City), São Cristóvão, Fortaleza, Sirinhaém and Olinda.

From 1630 onward, the Dutch Republic came to control almost half of Brazil's area at the time, with their capital in Recife. The Dutch West India Company (WIC) set up their headquarters in Recife. The governor, Johan Maurits, invited artists and scientists to the colony to help promote Brazil and increase immigration. The Portuguese won a significant victory at the Second Battle of Guararapes in 1649. On 26 January 1654, the Dutch surrendered and signed the capitulation, but only as a provisory pact. By May 1654, the Dutch demanded that the Dutch Republic was to be given New Holland back. On 6 August 1661, New Holland was formally ceded to Portugal through the Treaty of The Hague.

While of only transitional importance for the Dutch, this period was of considerable importance in the History of Brazil. Local Portuguese settlers had to oppose the Dutch largely by their own resources, and made use of their knowledge of local conditions; this struggle is counted, in Brazilian historical memory, as laying the seeds of Brazilian nationhood.

The significance of Spain 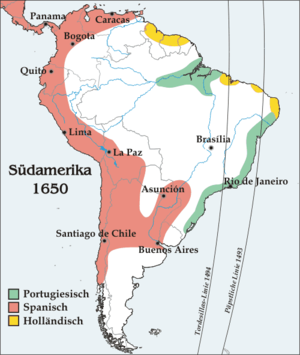 The Low Countries had long been part of the Spanish Empire; however, in 1568 the Eighty Years' War broke out, and the Dutch established the Republic of the Seven United Netherlands. A consequence of the war was the raiding of Spanish lands, colonies and ships by Dutch fleets. In 1594 the Spanish King Phillip gave permission for Dutch ships bound for Brazil to sail together once a year in a fleet of twenty ships.[1] In 1609, the two countries signed a Twelve Years' Truce in which the Dutch Republic was allowed to trade with Portuguese settlements in Brazil, since Portugal was in a dynastic union with Spain from 1580 to 1640. The Dutch also agreed to delay the creation of a West India Company, a counterpart to the already existing Dutch East India Company. In 1621, the twelve-year peace treaty expired and the Dutch West Indian Company was immediately created. The Dutch–Portuguese War resumed, and through the new company, the Dutch now started to interfere with the Spanish and Portuguese colonies in America. In 1624, the Dutch sent a large expedition to invade Brazil.

As part of the Groot Desseyn plan, Admiral Jacob Willekens in December 1623 led the West Indische Compagnie (WIC) to Salvador, which was then the capital of Brazil. They arrived there on May 8, 1624, on which Portuguese Governor Diogo Tristão de Mendonça Furtado surrendered to the Dutch.[2] However, by April 30, 1625, the Portuguese recaptured the city, with the help of a combined Spanish and Portuguese force. The city was to then play a critical role as a base of the Portuguese struggle against the Dutch for the control of Brazil.

In 1628, the seizure of a Spanish silver convoy in Matanzas Bay provided the Dutch WIC the funds for another attempt to conquer Brazil. 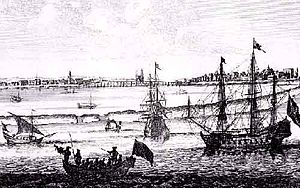 Recife or Mauritsstad – Capital of the Nieuw Holland in Brazil 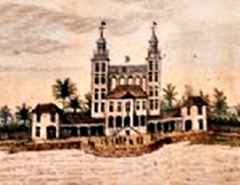 In the summer of 1629, the Dutch coveted a newfound interest in obtaining Pernambuco, a Brazilian state (captaincy) famous for its sugarcane. The Dutch fleet was led by Hendrick Corneliszoon Loncq; the WIC gained control of Olinda by February 16, 1630, and Recife (the capital of Pernambuco) and António Vaz by March 3.

Matias de Albuquerque, the Portuguese governor, led a strong Portuguese resistance which hindered the Dutch from developing their forts on the lands which they had captured. By 1631, the Dutch left Olinda and tried to gain control of the Fort of Cabedello on Paraíba, the Rio Grande, Rio Formoso, and Cabo de Santo Agostinho. These attempts were also unsuccessful, however.

Still in control of António Vaz and Recife, the Dutch later gained a foothold at Cabo Santo Agostinho. However, after the Portuguese regained Porto Calvo, the WIC gave control of Nieuw Holland to Johan Maurits van Nassau-Siegen due to the great advantage the Portuguese had over the Dutch by controlling Porto Calvo. By 1634 the Dutch controlled the coastline from the Rio Grande do Norte to Pernambuco's Cabo de Santo Agostinho. They still maintained control of the seas as well. By 1635 many Portuguese settlers were choosing Dutch-occupied land over Portuguese-controlled land. The Dutch offered freedom of worship and security of property. In 1635 the Dutch conquered three strongholds of the Portuguese: the towns of Porto Calvo, Arraial do Bom Jesus, and Fort Nazaré on Cabo de Santo Agostinho. These strongholds gave the Dutch increased sugar lands which led to an increase in profit.

In 1643 in Dutch Brazil Johan Maurits van Nassau-Siegen equipped the expedition of Hendrik Brouwer that attempted to establish an outpost in southern Chile.[3][4] 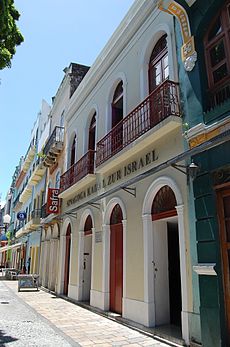 The Kahal Zur Israel Synagogue in Mauritsstad (Recife) is the oldest synagogue in the Americas. Jews made 50% of white population during Dutch Brazil.[5]

Maurits claimed to have always loved Brazil due to its beauty and its people. He organized a form of representative local government by creating municipal councils and rural councils. Through these he began to modernize the country with streets, bridges, and roads in Recife. On the island of António Vaz, he founded the town of Mauritsstad (also known as Mauricia) where he created an astronomic observatory and a meteorological station, which were the first created by Europeans in the Americas.
Under Maurits, protection for Brazilian Jews who had been formerly ostracized was increased. He allowed former Jews who had been forced to convert to Christianity to return to their former faith.

The Dutch settlers were divided into two separate groups, the first of which was known as “Dienaren” (servants). Dienaren were soldiers, bureaucrats, and Calvinist ministers employed by the WIC.

Vrijburghers (freemen) – or Vrijluiden – were the second group of Dutch settlers who were all the other Dutch settlers that did not fit into the category of Dienaaren. The Vrijburghers were mostly ex-soldiers formerly employed by the WIC but who then began to settle down. Others included Dutch who left the Netherlands to find a new life in Nieuw Holland. This group was the most economically important in Nieuw Holland since most trade was under their control.

The end of Dutch Brazil 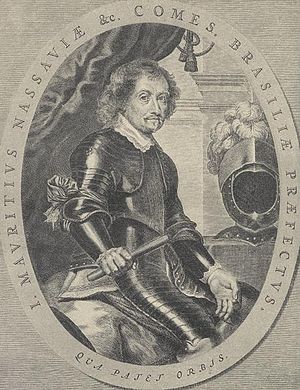 After returning from Brazil, John Maurice of Nassau became known as "The Brazilian" in the Netherlands.[6]

After Maurits was summoned back from Nieuw-Holland by the WIC board in 1643, the WIC lost control over the colony. Portuguese planters – under control when Maurits was governor-general – organized a revolt against the Dutch. The Portuguese gained Várzea, Serinhaém, Pontal de Nazaré, the Fort of Porto Calvo, and Fort Maurits in 1645.

On December 13, 1647, the Dutch left Itamaracá and on January 28, 1654, the WIC lost control of Recife, leaving to the Portuguese their colony of Brazil and putting an end to Nieuw Holland.[7]

Seven years after the surrender of Recife, a peace treaty was organized between the Dutch Republic and Portugal. The Treaty of The Hague (1661) was signed on August 6, 1661,[8] and it demanded that the Portuguese would pay 4 million réis over the span of 16 years in order to help the Dutch recover from the loss of Brazil.