From Infogalactic: the planetary knowledge core
Jump to: navigation, search
This article is about the fort in Rhode Island. For the Civil War-era fort in the District of Columbia, see Fort Greble. 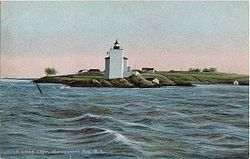 Dutch Island is an island lying west of Conanicut Island at an entrance to Narragansett Bay in Rhode Island, USA. The island is a part of the town of Jamestown, Rhode Island, and has a land area of 0.4156 km² (102.7 acres). It was uninhabited as of the 2000 census. The island was fortified from the American Civil War through World War II, and was known as Fort Greble 1898-1947. 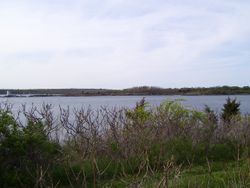 Dutch Island in 2008 from Fort Getty

Dutch Island's Indian name was Quotenis or Quetenesse. Around 1636 Abraham Pietersen van Deusen of the Dutch West India Company established a trading post on the island to trade with the Narragansett Indians, trading Dutch goods, cloths, implements, and liquors for the Indians' furs, fish, and venison. Several years later the Dutch built Fort Ninigret nearby. In 1654 English colonists purchased the island from the Indians. In 1825 the federal government acquired 6 acres (24,000 m2) at the southern end of the island, and on January 1, 1827, Dutch Island Light was established to mark the west passage of Narragansett Bay and to aid vessels entering Dutch Island Harbor. The first 30-foot (9.1 m) tower was built of stones found on the island. The government constructed a new 42-foot (13 m) brick tower in 1857 with a fog bell added in 1878. As of 2007, the island is part of the Bay Islands Park system of Rhode Island owned by the Rhode Island Department of Environmental Management (RIDEM). The island is easily accessible by kayak today off the coast of Conanicut Island (Jamestown). No remnants of the Dutch trading post exist today, but a lighthouse and military buildings remain on the island. 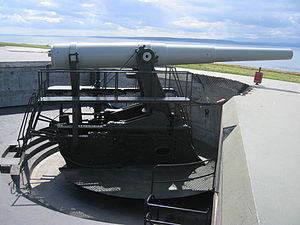 Fort Greble was named in honor of 1st Lt. John Trout Greble, 2nd Artillery, USA, who was the first officer of the Regular Army killed in the Civil War. In 1863, the land was sold to the United States government, and the island was taken over by the Army by 1864.

Following the Civil War, gun batteries were placed on Dutch Island, and by the late 19th century the defensive works had grown to become Fort Greble. Construction was spurred by the Spanish–American War, which included tunnels and gun emplacements, and the fort was enlarged until 1902. In 1897, the first of Fort Greble's Endicott Period works, Battery Hale, was completed with the emplacement of three 10-inch M1888 disappearing guns. Shortly after the war's outbreak a battery for one 6-inch Armstrong gun was constructed, but the gun was removed in 1903.[1] This was followed by the establishment of Battery Mitchell on the Armstrong gun site with three 6-inch M1903 disappearing guns, and Battery Sedgwick with eight 12-inch M1890 mortars. Finally 1900 saw the completion of Battery Ogden with its two 3-inch M1898 rapid fire guns on retractable masking parapet carriages.[2][3]

The New York Times reported that on 26 June 1908, a combined arms training exercise involving regular and militia military units from Fort Adams and Fort Greble was conducted. Soldiers and their commanders launched a simulated combined land and sea attack on the island. The residents of Newport and Jamestown were kept awake all night by the sound of the fort's guns going off. A copy of this newspaper report can be found here.

While posted at Fort Greble, on 2 April 1912 Corporal William W. Lee loaded two pounds of the wrong powder into the morning reveille gun (re-enactors typically use about 4 ounces or 8 tablespoons of black powder), Cpl Lee pulled the lanyard to discharge the ceremonial gun to awaken the troops and the breech blew up. Parts tore through his jaw and lodged in his brain. His wounds were fatal. His grave is not located on the island, but in Jamestown's town cemetery on Narragansett Ave.[4]

The fort was home to as many as 495 soldiers during World War I, under the command of Colonel Charles Foster Tillinghast, Sr. Several of the fort's guns were dismounted for potential service on the Western Front in 1917-18. One 10-inch gun of Battery Hale was dismounted for conversion to a railway gun; it was replaced by a similar gun from Fort Wetherill in late 1918. The three 6-inch guns of Battery Mitchell were dismounted in 1917 and sent to France for use on wheeled carriages; they were not returned to Fort Greble. Sources indicate that none of the 6-inch gun regiments completed training before the Armistice and thus they did not see combat.[2][5] Four of Battery Sedgwick's eight 12-inch mortars were dismounted in 1918 for potential use as railway artillery; this was part of a general halving of mortars deployed in pits to improve reloading efficiency.[2]

In 1920 Battery Ogden's 3-inch guns were withdrawn from service; this was part of a general retirement of the M1898 3-inch guns.[2] The fort was active till the mid-1920s as part of the Coast Defenses of Narragansett Bay. It was placed in caretaker status because the fort's cisterns were defective and could not hold sufficient water to support the garrison.

During World War II, Fort Greble was used as a German prisoner-of-war camp and was discontinued from service in 1947. The fort's guns were scrapped in 1942 once improved defenses centered on Fort Church and Fort Greene were constructed.[2][3]

Since the Second World War, there have been no redevelopment or preservation efforts on Dutch Island. The island has been used as a training site for the Rhode Island National Guard. The island's fortifications have become overgrown but are largely intact and free from vandalism.

The island is owned by the State of Rhode Island and is designated as a management area by the state's Department of Environmental Management.