The Dutch have a code of etiquette which governs social behaviour and is considered important.[citation needed] Because of the international position of the Netherlands, many books have been written on the subject. Some customs may not be true in all regions and they are never absolute. In addition to those specific to the Dutch, many general points of European etiquette apply to the Dutch as well.

Dutch society is egalitarian, individualistic and modern. The people tend to view themselves as modest, independent and self-reliant. They value ability over dependency. The Dutch have an aversion to the non-essential. Ostentatious behaviour is to be avoided. Accumulating money is fine, but public spending of large amounts of money is considered something of a vice and associated with being a show-off. A high lifestyle is considered wasteful by most people and sometimes met with suspicion. The Dutch are proud of their cultural heritage, rich history in art and involvement in international affairs.

Dutch manners are blunt with a no-nonsense attitude; informality combined with adherence to basic behaviour. This might be perceived as impersonal and patronising by other cultures, but is the norm in Dutch culture. According to a source on Dutch culture,Their directness gives many the impression that they are rude and crude—attributes they prefer to call ‘openness’.[1] Dutch egalitarianism is the idea that people are equal, especially from a moral point of view, and accordingly, causes the somewhat ambiguous stance the Dutch have towards hierarchy and status.[2] As always, manners differ between groups. Asking about basic rules will not be considered impolite. What may strike you as being blatantly blunt topics and comments are no more embarrassing or unusual to the Dutch than discussing the weather.[1]

The author Colleen Geske stated in her book Stuff Dutch people like that "Dutch people consider the English or American forms of politeness a sign of weakness, and reeking of insincerity and hypocrisy . These are two traits Dutch people despise".[3]

Research for Dutch world service radio concluded that just over half of the Dutch people living abroad consider their compatriots at home less well-mannered than other nationalities. In particular, waiters, teenagers and shop staff score badly. Some 55% of Dutch expats think the Dutch have become ruder since they left the country.[4]

Phrases saying hello or goodbye differ between regions, but are generally understood everywhere. However, the use of dialectal forms, for example the Brabantic "houdoe", Limburgish "haije", Gronings "moi", and the Frisian "'goeie'" links the speaker to that region.

In the Netherlands, shaking hands is very important. When someone is introduced, he/she will shake hands and state his/her name. When leaving people shake hands again and thank the person in question for the visit/meeting/etc. At the next meeting, shaking hands is not necessary, but in business situations it is common. Shake hands with everyone present -- men, women, and children -- at business and social meetings. Introduce yourself if no one is present to introduce you. The Dutch consider it rude not to identify yourself.

The Dutch do not have a special hand for personal hygiene, eating, or praying. This means that they do not realise this may be considered insulting to some cultures when they pass something on with either the left or right hand.

In some circles and geographical areas the custom of social kissing is more common than in others. It is only done among people who know each other rather well. People might kiss each other on the cheeks three times alternating right and left cheeks, every time they meet or leave. This is not compulsory. If someone does not want to be kissed, he or she extends the hand for a handshake. Men do not kiss other men on the cheeks. Men and women, and women among each other, will do it more often. Often there will not be an actual kiss, but rather the touching of the cheeks against each other.

Dutch people quickly start calling people by their first name. In the Netherlands, a younger person, a child, a relative, a friend, or an acquaintance are addressed with an informal "je/jij" ("you"). The formal "u" is used to address people one does not know, or is only slightly acquainted with. "U" is also used to address a higher-ranking businessperson, although it can soon be replaced by the informal "je."

When meeting someone in the Netherlands for the first time, they are generally called sir or madam, but one will soon be asked to refer to them by their first name. In other countries, it takes much longer for people to associate on a first name basis. There is no special rule that tells how to deal with this, it is safe to follow the lead of the other person. When one introduces him/herself with just their first name, it is safe to assume that they prefer to be addressed with the informal "jij/je".

The Dutch do not use titles when they speak to someone. In writing, one can state the title, but only in an official letter. The only exception is the Dutch King and Queen, which will always be referred to as His and Her Majesty. However, the current King, Willem-Alexander of the Netherlands, has stated that people can address him in any way they feel comfortable with.[5]

When making a phone call, always state name (and, if appropriate, company name). Even when one calls a cab, order a pizza, or ask for information, it is polite to mention one's name.

When receiving a call, one does the same: pick up the phone and state the name. When a Dutch person answers the phone, he/she will identify him-/herself by stating their first name and/or last name. The name is usually preceded by "met" (Literally "with", meaning "You are speaking with.") The caller is expected to identify him- or herself as well, before starting the conversation or asking to speak to another person.

The Dutch and foreign languages

Internationally, the Dutch are considered to be proficient at speaking foreign languages. This is because the Netherlands has a high standard of language education which focuses on the international position of the country. Teaching of English starts in the last 2 years of elementary (or primary) school, and is an obligatory part of the national exam in all high schools. German and French are commonly taught and are often chosen as an end subject in which a final exam is taken in high school. In addition, some high schools offer Spanish, Arabic, Italian, Russian or Turkish, which may or may not be chosen as part of a pupil's final exams. At a gymnasium, a type of pre-university school, Latin and Ancient Greek are taught as an integral part of the curriculum.

Addressing the Dutch in their native language may result in a reply in English. This phenomenon is humorously discussed in White and Boucke’s The UnDutchables: "If you take a course in the Dutch language and finally progress enough to dare to utter some sentences in public, the persons you speak to will inevitably answer you in what they detect to be your native tongue. They love to show off the fact that they have learned one or more languages."[8] Another opinion is that the Dutch want to make it more easy for you and want to get to the point quickly. This can be frustrating for those who wish to improve their Dutch, while those who are competent in Dutch may find replies in English patronizing. But Dutch people will perceive a foreigner trying to speak Dutch as someone who is having difficulty expressing himself, or may welcome the opportunity to try their English. They may also preemptively try to avoid miscommunication by speaking your native tongue, if they consider themselves fluent enough.

Dutch humor has changed over the centuries. In the 16th century, the Dutch were renowned for their humor throughout Europe, and many travel journals have notes on the happy and celebratory nature of the Dutch. Farces and joke books were in demand and many Dutch painters chose to paint humorous paintings, Jan Steen being a good example. 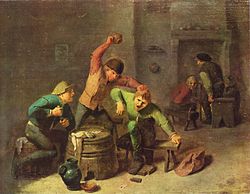 The main subjects of Dutch jokes at the time were deranged households, drunken clerics (mostly of the Roman Catholic Church) and people with mental and/or physical handicaps. A main theme was the reproof of immoral ethics: the 'Vicar's wagging finger'. However, at the end of the 17th century, the Dutch Republic was in decline, and the Dutch Reformed Church denounced laughter and advocated sober lifestyles. Etiquette manuals appeared which considered it impolite to laugh out loud. This continued into the 1960s: during World War II, American soldiers were instructed not to tell jokes to the Dutch as "they would not appreciate it".[9]

The Netherlands has one of the lowest death rates caused by road traffic in the world.[10] The Dutch driving test is one of the toughest in the world and there is a mandated minimum number of hours driving with a licensed instructor. However, this does not necessarily translate into a pleasant driving style. Note that not all points mentioned here are true for all Dutch drivers.

A waiter or waitress is beckoned by slightly raising a hand, making eye-contact or calling "Ober" ("Waiter") or "Mevrouw" (literally "Madam", meaning "Waitress"), but not too loudly. Snapping fingers is considered very rude.

Enjoying lunch or dinner with a (male or female) friend will very often end up in Going Dutch (splitting the bill). When invited to a lunch or dinner, the Dutch will make it clear that you are their guest and that they intend to pay the bill, otherwise expect to "Go Dutch" and pay your fair share. No one will be embarrassed at splitting the bill. In the Netherlands, men and women are equal, which means that women enjoy the same privileges as men. When one invites someone, or if one is invited, it is only in corporate situations to be expected that the one who does the inviting pays for dinner. Otherwise bills will be split up, sometimes even when people are on a date. It is a way of showing that one is independent and self-reliant, which is highly valued in the Dutch society and insisting to pay the bill for the other party might be considered slightly offensive by the other party. Friends or couples that eat out on a regular basis may take turns paying the bill.

The Dutch will invite only very close friends and relatives they feel close to for a home dinner. It might take a long time of friendship before this will happen or it might never happen at all. If you are invited to have dinner at someone's home, it is polite to bring a bottle of wine along as a way of saying thanks for the dinner and to show appreciation for the invitation. Similarly it is also usual to present flowers. When invited for a meal in someone's home, people are expected to eat all the food on their plate. It is better to take multiple portions of food than take too much at once and not eating all of it (which is considered wasteful or a sign that the food did not taste well).

Table manners are important to the Dutch and if one breaks this etiquette, the Dutch might frown or make remarks about it.

In the Netherlands, everyone receives a basic salary, tipping is entirely optional and for many Dutch completely unnecessary. For example: