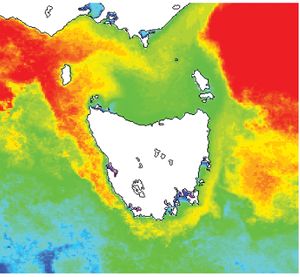 The East Australian Current (EAC) is the southward western boundary current that is formed from the South Equatorial Current (SEC) crossing the Coral Sea and reaching the eastern coast of Australia. At around 15° S near the Australian coast the SEC divides forming the southward flow of the EAC. It is the largest ocean current close to the shores of Australia. The EAC reaches a maximum velocity at 30° S where its flow can reach 90 cm/s. As it flows southward it splits from the coast at around 31° to 32° S. By the time it reaches 33° S it begins to undergo a southward meander while another portion of the transport turns back northward in a tight recirculation. At this location the EAC reaches its maximum transport of nearly 35 Sv.[1] The majority of the EAC flow that does not recirculate will move eastward into the Taman Front crossing the Tasman Sea just north of the cape of New Zealand. The Tasman Front transport is estimated at 13 Sv. The eastward movement of the EAC through the Tasman Front and reattaching to the coastline of New Zealand forms the East Auckland Current.[2][3] The EAC also acts to transport tropical marine fauna to habitats in sub-tropical regions along the south east Australian coast.

In the 2003 Disney/Pixar animated film Finding Nemo, the EAC is portrayed as a superhighway that fish and sea turtles use to travel down the east coast of Australia. The characters Marlin and Dory join a group of sea turtles in using the EAC to help them travel to Sydney Harbour. The basic premise of this storyline is correct. Every summer, thousands of fish are swept from the Great Barrier Reef to Sydney Harbour and further south.[4]