The town consists primarily of two villages, Flanders and Niantic. It is common for the town of East Lyme to be erroneously called "Niantic", due to this side of town being the "beach" side which is popular with tourists and visitors in the summer months. Niantic's population doubles in the summer months for the beach season, and it has a much higher density than the more sparsely populated Flanders side of town, which is known for its apple orchards, the town's high school, and forest. 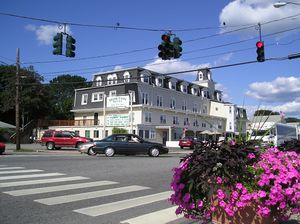 The Morton House Hotel in the village of Niantic has been in continuous operation for more than 100 years.

The village of Niantic gets its name from the Niantic or Nehantic people, whose ranging grounds once extended from Wecapaug Brook, in what is now Rhode Island, to the Connecticut River. Shortly before the first settlers arrived, the Pequots had invaded Nehantic territory and annexed about half of the land claimed by the tribe. According to local historian Olive Tubbs Chendali:

It was the construction of the railroad in 1851 that lured people to the shoreline which up to this time had been known - not as Niantic - but as "The Bank". Long before this time, however, as evidenced by The Diary of Joshua Hempstead - 1711 - 1758 it was known as "Nahantick" "Nyantick" or "Nehantic", the home territory of the Nehantic Indians.[2]

Sportfishing and marinas dominate the village's industry along with summer tourism and restaurant trade. Strong regional businesses include seafood restaurants and hotels/motels serving the town's beaches and the casinos at Foxwoods and Mohegan Sun. Rocky Neck State Park features camping, swimming and picnic areas along with numerous marinas and sportfishing companies.

The Niantic Bay Boardwalk is a popular place for tourists and locals to walk. When it was built it was one mile (1.6 km) long, spanning the length of Niantic Bay. Currently it is closed to public access in two places:

The existing Niantic River Bridge is a historic railroad bridge built in 1907 by the King Bridge Company.[5]

The Children's Museum of Southeastern Connecticut is located in East Lyme's original public library on Main Street. The museum is aimed primarily at children ages infant to ten years old. The current public library is located on Society Road, away from Niantic.

The village of Flanders, originally a farming area along the Old Post Road, gets its name from the development of a cottage textile industry similar to that in Flanders, Belgium. Flanders Four Corners is located at the intersection of Chesterfield Road (Route 161) with the Boston Post Road (Route 1) that is the site of many small stores and businesses. Flanders was the original center of the East Society of Lyme until the early 1800s when more development began in the Niantic area. Flanders Four Corners was a very populated roadway with dozens of 18th century homes, shops mostly taken down with the new highway - Interstate 95 built in the 1950s - that stretched from the four corners to the Waterford line. Some homes remain closer to the Waterford line at the site of the old Beckwith Shipyard at the head of the Niantic River.

The old Caulkins Tavern stood at the site of the current CVS and was a well traveled and documented stopping place in the 18th century from none other than Sarah Knight in his diary as well as General George Washington who stopped here with thousands of troops in 1776.

Golden Spur is a community located at the head of the Niantic River, which earned it its other name, "Head of the River". In the eighteenth century it was the site of the Beckwith shipyard. By the turn of the 20th century it was the site of an amusement park accessible by trolley run by the East Lyme Street Railway. The park operated until 1924.[6]

The topography of East Lyme consists of rolling hills and lush valleys rounded by glaciers during the last Ice Age. Hills rise to elevations of 250 to 350 feet (76 to 107 m) above sea level in the eastern and central areas of the town. The highest point in town is an unnamed hilltop with an elevation of 500 feet (150 m) located in Nehantic State Forest in the northwest corner of the town.[7] East Lyme is especially scenic in the summer when the trees are in bloom. On its east and southern sides, the town abuts tidewater. The tidal Niantic River on the east feeds Niantic Bay, an arm of Long Island Sound, which forms the southern edge of the town.

There were 6,308 households out of which 33.1% had children under the age of 18 living with them, 61.0% were married couples living together, 8.4% had a female householder with no husband present, and 28.1% were non-families. 23.3% of all households were made up of individuals and 8.8% had someone living alone who was 65 years of age or older. The average household size was 2.50 and the average family size was 2.96.

The town's public schools are operated by the East Lyme School District.

East Lyme High School hosts the East Lyme Aquatic & Fitness Center. The center contains an eight-lane, 25-yard-long (23 m), competition swimming and diving pool, and a fitness facility with Nautilus equipment, free weights, and a cardiovascular line. The facility is used by high school swimming and diving teams as well as being open to the public, on a fee basis, when not in use by the school. East Lyme High School athletic teams have recently won the Class L State Championships in girls volleyball for the 2010 and 2011 seasons, and reached the Class M State Finals in girls tennis in 2012. Students from the neighboring town of Salem also attend East Lyme High School.

The East Lyme Middle School[14] is a 1999–2000 National Blue Ribbon School and a 2004 New England League of Middle Schools Spotlight School. It is also the Connecticut Association of Schools 2013-2014 School of the Year. It includes a high tech computer lab and a spacious library.

The Middle School uses a team program called kivas. A kiva contains a science teacher, a language arts or English teacher, a social studies teacher and a math teacher. Some kivas are smaller and have a math and science teacher and a language arts and social studies teacher. There are 11 kivas consisting of two types: multi-age looping and two-year looping. The last kiva is a world language kiva where students can study French or Spanish. 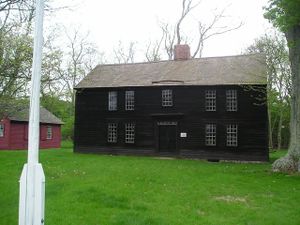 The Thomas Lee House, built circa 1660, is the oldest house in Connecticut that is still in its primitive state. This building is located in the southwestern section of East Lyme, adjacent to Rocky Neck State Park, at the intersection of Connecticut Route 156 and Giants Neck Road. Co-located on this site is the one-room Little Boston Schoolhouse, which was relocated to its current location from across Route 156. The town features six homes from 1699 or earlier, and the Old Stone Church Burial Ground from 1719 located off Society and Riverview roads.

The area occupied by the town was originally inhabited by the Nehantic people, who maintained villages in the present-day Indian Woods section as well as on Black Point, in the McCooks Beach area and near the Niantic River. The tribe allied itself with the colonists in the 1636 war against the Pequot people. The Nehantic eventually died out in the mid-19th century. The 1750s Ezra Stiles map shows the Nehantic village in what is now Indian Woods as consisting of "12 or 13 huts".

East Lyme, then a part of Lyme, had several taverns which offered stopping places for travelers such as Sarah Kemble Knight. These included Calkins Tavern on what is now Boston Post Road, Royce's Tavern, and Taber Tavern near present-day I-95. At least 25 Revolutionary War veterans are buried within the borders of East Lyme, and countless more veterans from East Lyme found resting places in upstate New York, New Hampshire and Ohio. Moses Warren, along with General Samuel Holden Parsons originally of Lyme and Moses Cleaveland, set out to survey the Ohio Territory in the latter part of the 1790s and has Warren County, Ohio named after him.[15]

The first library was started in 1888 and was called the Niantic Library and Reading Room Association. There were 65 founding members. In 1897 the library was formally incorporated as "The Niantic Public Library Association" by the state of Connecticut. The library moved a few times until a permanent structure was built in 1920 on Main Street. In 1966 a wing was added, and in 1979 another addition was added. In 1990 the library moved into the new Community Center/Library complex, where it exists today.

FM station WNLC is based in East Lyme. 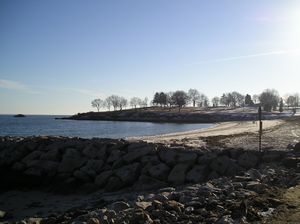