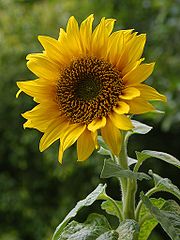 The sunflower was one of the plants that made up the Eastern Agricultural Complex.

The Eastern Agricultural Complex was one of about 10 independent centers of plant domestication in the pre-historic world. By about 1,800 BCE the Native Americans (Indians) of North America were cultivating for food several species of plants, thus transitioning from a hunter-gatherer economy to agriculture. After 200 BCE when maize from Mexico was introduced what is now the eastern United States, the Indians of the present-day United States and Canada slowly changed from growing indigenous plants to a maize-based agricultural economy. The cultivation of indigenous plants declined and was eventually abandoned, the formerly domesticated plants reverting to their wild forms.[1]

The term Eastern Agricultural Complex (EAC) was popularized by anthropologist Ralph Linton in the 1940s. Linton suggested that the Eastern Woodland tribes integrated maize cultivation from Mexico into their own pre-existing agricultural practices.[3] Ethnobotanists Volney H. Jones and Melvin R. Gilmore built upon Ralph Linton's understanding of Eastern Woodland agriculture with their work in cave and bluff dwellings in Kentucky and the Ozark Mountains in Arkansas. George Quimby also popularized the term "Eastern complex" in the 1940s. Authors Guy Gibbons and Kenneth Ames suggest that "indigenous seed crops" is a more appropriate term than "complex".[3] 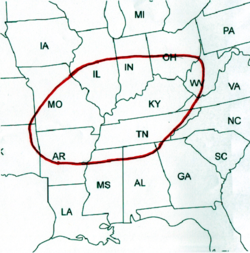 Squash (Cucurbita pepo var. ozarkana) is considered to be one of the first domesticated plants in the Eastern Woodlands, having been found in the region about 7,000 years ago, though possibly not domesticated in the region until about 3,000 years ago.[3][5][6] The squash that was originally part of the complex was raised for edible seeds and to produce small containers (gourds), not for the thick flesh that is associated with modern varieties of squash.[7][8][9] Cucurbita argyrosperma has been found in the region dated to circa 1300-1500 BC.[10] C. pepo cultivars crookneck, acorn, and scallop squash appeared later.[11]

The plants are often divided into "oily" or "starchy" categories. Sunflower and sumpweed have edible seeds rich in oil. Erect knotweed and goosefoot, a leafy vegetable, are starches, as are maygrass and little barley,[12] both of which are grasses that yield grains that may be ground to make flour. (Note that erect knotweed is a distinct species from the Japanese knotweed (Polygonum cuspidatum) that is considered an invasive species in the eastern United States today.) 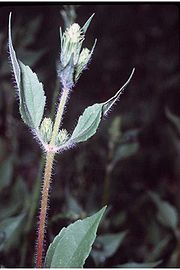 The archaeological record suggests that humans were collecting these plants from the wild by 6000 BCE, then gradually modifying them by selective collection and cultivation. In the 1970s, archaeologists noticed differences between seeds found in the remains of prehistoric Indian hearths and houses and those growing in the wild. In a domestic setting, the seeds of some plants were much larger than in the wild, and the seeds were easier to extract from the shells or husks. This was evidence that Indian gardeners were manipulating the plants to make them more productive and accessible.

Most experts had previously believed that agriculture in the U.S. was imported from Mexico, along with the trinity of subtropical crops: maize (corn), beans, and squash. What is now accepted is that the eastern United States was one of about ten regions in the world to become an "independent center of agricultural origin."[13][14]

The region of this early agriculture is in the middle Mississippi valley, from Memphis north to St. Louis and extending about 300 miles east and west of the river, mostly in Missouri, Illinois, Kentucky, and Tennessee. The oldest archaeological site known in the United States in which Indians were growing, rather than gathering, food is Phillips Spring in Missouri. At Phillips Spring, dating from 3,000 BCE, archaeologists found abundant walnuts, hickory nuts, acorns, grapes, elderberries, ragweed, bottle gourd, and the seeds of Cucurbita pepo, a gourd with edible seeds that is the ancestor of pumpkins and most squashes. The seeds found at Phillips Spring were larger than those of wild C. pepo. The agency for this change was surely human manipulation. Humans were selecting, planting, and tending seeds from plants that produced larger and tastier seeds. Ultimately, they would manipulate C. pepo to produce edible flesh.[15]

By 1800 BCE, Indians were cultivating several different plants. The Riverton Site in the Wabash River valley of Illinois, near the present day village of Palestine, is one of the best known early sites of cultivation. Ten house sites have been discovered at Riverton, indicating a population of 50 to 100 people in the community. Among the hearths and storage pits associated with the houses, archaeologists found a large number of plant remains, including a large number of seeds of chenopods (goosefoot or lamb's quarters) which are likely cultivated plants. Some of the chenopod (Chenopodium berlandieri) seeds had husks only one third as thick as wild seeds. Riverton farmers had bred them selectively to produce a seed easier to access than wild varieties of the same plant.

The wild food guru of the 1960s, Euell Gibbons, gathered and ate chenopods. "In rich soil," he said, "lamb's quarters will grow four or five feet high if not disturbed, becoming much branched. It bears a heavy crop of tiny seeds in panicles at the end of every branch. In early winter, when the panicles are dry, it is quite easy to gather these seeds in considerable quantity. Just hold a pail under the branches and strip them off. Rub the husks between the hands to separate the seed and chaff, then winnow out the trash. I have collected several quarts of seed in an hour, using this method.

"The seeds are quite fine, being smaller than mustard seeds, and a dull blackish-brown color....I find it pretty good food for humans."[16]

Another plant species at Riverton that can confidently be identified as domesticated was sunflower (Helianthus annuus). This is based on the larger size of the seed in the domesticated than in the wild varieties. Remains of plants that were used, but may or may not have been domesticated at Riverton, include bottle gourd (Lagenaria siceraria), squash (C. pepo), wild barley (Hordeum pusillum) and marsh elder (Iva annua).[17] 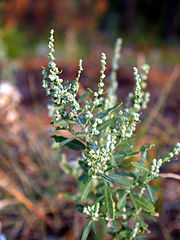 Some of the species cultivated by Indians for food are today considered undesirable weeds. Another name for marshelder is sumpweed; chenopods are derisively called pigweed, although one South American species with a more attractive name, quinoa, is a health food store favorite. The reason for the unattractive names of former American food plants is probably because they are the colonizers of disturbed soil, the first fast-growing weeds to spring up when a natural or man-made event, such as a fire, leaves a bare patch of soil.

The process of domestication of wild plants cannot be described with any precision. However, Bruce D. Smith and other scholars have pointed out that three of the domesticates (chenopods, I. annua, and C. pepo) were plants that thrived in disturbed soils in river valleys. In the aftermath of a flood, in which most of the old vegetation is killed by the high waters and bare patches of new, often very fertile, soil were created, these pioneer plants sprang up like magic, often growing in almost pure stands, but usually disappearing after a single season, as other vegetation pushed them out until the next flood.

Indians, probably women[citation needed], learned early that the seeds of these three species were edible and easily harvested in quantity because they grew in dense stands. C. pepo was important also because the gourd could be made into a lightweight container that was useful to a seminomadic band. Chenopods have edible leaves, related to spinach and chard, that may have also been gathered and eaten by Indians. Chenopod seeds are starchy; marsh elder has a highly nutritious oily seed similar to sunflower seeds. 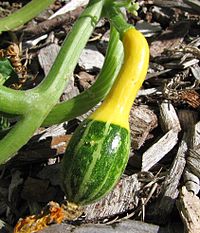 Cucurbita pepo was bred to produce both edible squash and gourds.

In gathering the seeds, the women undoubtedly dropped some in the sunny environment and disturbed soil of a settlement, and those seeds sprouted and thrived. Over time, women learned to sow the seeds and to clear the ground of any competitive vegetation. The seeds which germinated quickest (i.e. thinner seed coats) and the plants which grew fastest were the most likely to be tended, harvested, and replanted. Through a process of unconscious selection and, later, conscious selection, the domesticated weeds became more productive. The seeds of some species became substantially larger and/or their seed coats were less thick compared to the wild plants. For example, the seed coats of domesticated chenopodium is less that 20 microns thick; the wild chenopodium of the same species is 40 to 60 microns thick.[18] Conversely, when Indians quit growing these plants, as they did later, their seeds reverted within a few years to the thickness they had been in the wild.[19]

By about 500 BCE, seeds produced by six domesticated plants were an important part of the diet of Indians in the middle Mississippi River valley of the United States.[20]

The indigenous crops were replaced slowly by other more productive crops developed in Mexico: maize, beans and additional varieties of squash. Maize, or corn, was a relative latecomer to the United States. The oldest known evidence of maize in Mexico dates from 6,700 BCE.[21] The oldest evidence of maize cultivated in the United States is about 2,100 BCE at several locations in Arizona and New Mexico.[22]

Maize was first grown in the eastern United States around 200 BCE, and highly productive adapted strains became widely used around 900 CE.[23] The spread was so slow because the seeds and knowledge of techniques for tending them had to cross inhospitable deserts and mountains, and more productive varieties of maize had to be developed to compete with indigenous crops and to suit the cooler climates and shorter growing seasons of the northern regions of the continent. Tropical maize does not flower under the long day conditions of summer north of Mexico, requiring genetic adaptation.[24] It seems that maize was adopted first as a supplement to existing agricultural plants, but gradually came to dominate as its yields increased. Ultimately, the EAC was thoroughly replaced by maize-based agriculture.[12] Most EAC plants are no longer cultivated, and some of them (such as little barley) are regarded as pests by modern farmers.