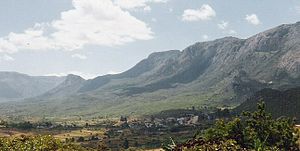 Northern part of the Eastern Highlands range as seen from Nyanga town.

The Eastern or 'East African Highlands' is a mountain range in the east of Zimbabwe and one of four distinct physiographic divisions on the African continent.

The range forms Zimbabwe's eastern border with Mozambique and comprises three main mountain groups - Nyanga (to the north) which contains Zimbabwe's highest mountain Mount Nyangani, Africa's second-longest waterfall Mutarazi Falls and the Honde Valley which leads into Mozambique; Bvumba Mountains (centrally situated near the city of Mutare); and Chimanimani (to the south). These regions are all sparsely populated, highland country and are covered in rich grassland and forests.

The Highlands have a cooler and wetter climate than other parts of Africa with higher rainfall, low cloud and heavy mists and dew as moisture moves inland from the Indian Ocean. Many streams and rivers originate in these mountains, which form the watershed between the Zambezi and Save River systems.

This variety of different types of habitat results in a richness of animal life too. Animals found in the Highlands include blue monkey (Cercopithecus mitis) the Samango Sykes' monkey, East African little collared fruit bat (Myonycteris relicta) and Marshall's pygmy chameleon (Rhampholeon marshalli). Many of these animals are found throughout East Africa.[1]

The mountain forests are vulnerable to logging and the grasslands susceptible to fire and the rainforests, which by definition grow on well-watered fertile land, to clearance for agriculture. The moist climate is ideal for planting tea, coffee and hardwoods. However, much of the original vegetation remains, especially at higher altitudes, which are not suitable for farming. Large areas of the Highlands are protected, including the 171km2 Chimanimani National Park and Nyanga National Park.