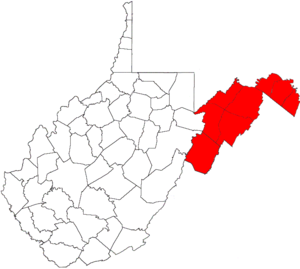 The Eastern Panhandle of West Virginia is small stretch of territory in the northeast of the state, bordering Maryland and Virginia, United States. Some sources and regional associations only identify the Eastern Panhandle as being composed of Morgan, Berkeley, and Jefferson Counties.[1]

The Baltimore and Ohio Railroad runs through the panhandle, and was a key transportation link to Washington, D.C. during the Civil War. Harper's Ferry was the site of a U.S. Armory until 1861. The strategic nature of the area influenced its inclusion in West Virginia by the Union Congress.

There has been talk about certain counties in the Eastern Panhandle rejoining Virginia, due primarily to poor economic conditions and perceived neglect from the state government. In 2011, West Virginia state delegate Larry Kump sponsored legislation to allow Morgan, Berkeley, and Jefferson counties to rejoin Virginia by popular vote.[2]

The Eastern Panhandle includes both West Virginia's highest and lowest elevations above sea level: Spruce Knob, 4,863 feet (1,482 m), in Pendleton and Harpers Ferry, 240 feet (73 m), in Jefferson on the Potomac River. The region is separated from the remainder of the state by the Allegheny Front, which separates the Mississippi watershed from that of Chesapeake Bay.

The counties in the eastern panhandle are:[3]

Building of planned communities surged in the Eastern Panhandle during 2000-2008 with thousands of individual homes, condominiums and townhouses available on the open market. Homeowner associations were deemed responsible for financially supporting their infrastructure, common areas; a servitude borne by the HOA's individual homeowners. Due to the number of questions by homeowners, the Eastern Panhandle Organization of Homeowners Associations, Inc., a non-profit corporation,[7] first registered as the Jefferson County Organization of Homeowners Associations, Inc.; grew from the necessity of answers from and by homeowners. The sole mission of EPOHOA focuses on issues relating to the preservation and promotion of the present and future welfare of homeowners. Synonyms for homeowners associations include, but are not limited to: Homeowners Association (HOA), Planned Community, Subdivision, Common Interest Community (CIC), Common Interest Development (CID), Property Owners Association (POC), Planned Unit Development (PUD).

The majority of the Eastern Panhandle's growing residential developments are located outside city and town boundaries and are not included in the city or town's official population.

NOTE: This list does not include the unincorporated census-designated places of Inwood (pop. 2,954) and Fort Ashby (pop. 1,380). The U.S. Census Bureau does not release estimates for CDPs. The population figures listed are from the 2010 census.

Several counties in the Eastern Panhandle are part of metropolitan, micropolitan, and consolidated metropolitan statistical areas defined by the United States Office of Management and Budget.