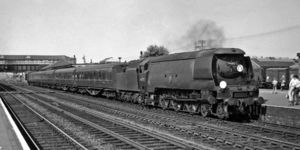 A Special for Salisbury via Southampton in 1964

Eastleigh railway station serves the town of Eastleigh in the county of Hampshire in England. It is located on the South Western Main Line and is the junction station for two other routes, the Eastleigh-Fareham Line and the Eastleigh-Romsey Line. South of the station are Eastleigh Railway Works and Eastleigh Depot.

The station was built by the LSWR and was called Bishopstoke when it was opened in 1839.The station-house was designed by Sir William Tite.[1] It was renamed Bishopstoke Junction in 1852, Eastleigh and Bishopstoke in 1889, and finally Eastleigh Station in 1923.

The station and its services are operated by South West Trains. They operate services on three different lines, one is to Portsmouth Harbour via Hedge End, one is on the South West Main Line to Poole via Bournemouth. Both of these services start from London Waterloo. The third route is on the Salisbury to Romsey "Figure 6" stopping line.

Southern also operate one daily service on Mondays to Saturdays in the afternoon to Brighton, also one service from Brighton in late afternoon which then runs to Southampton Central after being reversed.

The general off-peak service follows the pattern of:

The general Sunday service is similar, but with just one train to Waterloo per hour: the Poole and Portsmouth Harbour services join/split at Eastleigh, then run to/from London Waterloo as a joint service.