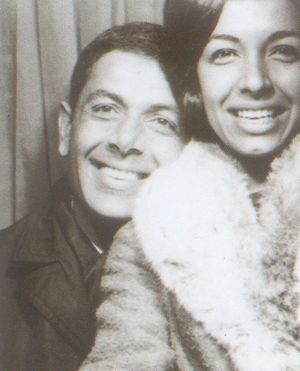 Ebrahim Golestan with his daughter, Lili

Ebrahim Golestan (Taghavi Shirazi) (also spelt Ibrahim Golestan, Persian: ابراهیم گلستان‎‎), (born October 19, 1922 in Shiraz, Iran) is an Iranian filmmaker and literary figure with a career spanning half a century. He has lived in Sussex, United Kingdom, since 1975.

He was closely associated with the controversial and eminent Iranian poet Forough Farrokhzad until her death, whom he met at his studio in 1958. He is said to have inspired her to live more independently.[1]

Golestan was married to his cousin, Fakhri Golestan. He is the father of Iranian photojournalist Kaveh Golestan, and Lili Golestan,[2] translator and owner and artistic director of the Golestan Gallery in Tehran, Iran. His grandson, Mani Haghighi, is also a film director. His other grandson Mehrak, is a rapper.

After Farrokhzâd's death, Golestân was protective of her privacy and memory. For example, in response to the publication of a biographical/critical study by Michael Craig Hillmann called A Lonely Woman: Forugh Farrokhzad and Her Poetry (1987), he published a lengthy attack against Hillmann in a Tehran literary magazine,[3] to which Hillmann responded to the attack at length in an article part of which was also published in the same Tehran literary magazine and which is available online at Academia.edu/Michael Hillmann under the title "Az Shâ'eri-ye Nâder Nâderpur to Fârsi'khâni dar Qalb-e Tekzâs, Javâbiyeh'i be Ebrâhim Golestân."