Ebrahim Hatamikia, who is internationally renowned for his role in the cinema of Iran in the 1990s, was born in 1961 in Tehran to Iranian Azerbaijani parents.[1] He left the Art University where he studied script writing. He began his directing career with the film The Identity in 1986 and some short films and documentaries about the Iran–Iraq War. His movies are considered to be the best that tackle the war and the issues surrounding it. His works have often received admiration in national film festivals. The Glass Agency and In the Name of the Father have won him the best screenplay and directing awards in the sixteenth and twenty-fourth Fajr International Film Festival respectively. His recent works have also been on international screens: The Glass Agency in Berlin and The Red Ribbon in San Sebastián. 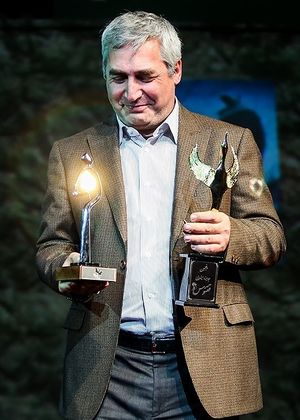