Burkina Faso has an average income purchasing-power-parity per capita of $1,666 and nominal per capita of $790 in 2014. More than 80% of the population relies on subsistence agriculture, with only a small fraction directly involved in industry and services. Highly variable rainfall, poor soils, lack of adequate communications and other infrastructure, a low literacy rate, and a stagnant economy are all longstanding problems of this landlocked country. The export economy also remains subject to fluctuations in world prices.

The country has a high population density, few natural resources, and a fragile soil. Industry remains dominated by unprofitable government-controlled corporations. Following the African franc currency devaluation in January 1994 the government updated its development program in conjunction with international agencies, and exports and economic growth have increased. Maintenance of its macroeconomic progress depends on continued low inflation, reduction in the trade deficit, and reforms designed to encourage private investment.

The banking sector is highly concentrated, with the three largest banks holding nearly 60% of total financial sector assets. Banks are generally adequately capitalized, but remain vulnerable due to their overexposure to the cotton sector, the prices of which are subject to significant oscillations.

As of 2007, the World Bank estimated that 26% of the Burkinabé population has access to financial services. The Central Bank of the West African States (BCEAO) reports that about 41 microfinance institutions (MFIs) operate in the country, serving a total of 800,000 customers. Burkina Faso is a member of the regional Bourse Regional des Valeurs Mobilières (BRVM) located in Abidjan, Ivory Coast. As of 2009, the regional stock exchange’s market capitalization reached nearly 10% of Burkina Faso’s GDP.[7]

Burkina Faso was ranked the 111th safest investment destination in the world in the March 2011 Euromoney Country Risk rankings.[8]

This is a chart of trend of gross domestic product of Burkina Faso at market prices estimated by the International Monetary Fund with figures in millions of CFA Francs.

For purchasing power parity comparisons, the US Dollar is exchanged at 470.70 CFA Francs only. Mean wages were $0.56 per manhour in 2009.

Current GDP per capita[9] of Burkina Faso grew 13% in the Sixties reaching a peak growth of 237% in the Seventies. But this proved unsustainable and growth consequently scaled back to 23% in the Eighties. Finally, it shrank by 37% in the Nineties. Average wages in 2007 hover around 2 to 3 dollars per day.

Although handicapped by an extremely resource-deprived domestic economy, Burkina Faso remains committed to the structural adjustment program it launched in 1991. It has largely recovered from the devaluation of the CFA in January 1994, with a 1996 growth rate of 5.9%.

Many Burkinabé migrate to neighbouring countries for work, and their remittances provide a substantial contribution to the balance of payments. Burkina Faso is attempting to improve the economy by developing its mineral resources, improving its infrastructure, making its agricultural and livestock sectors more productive and competitive, and stabilizing the supplies and prices of cereals.

The agricultural economy remains highly vulnerable to fluctuations in rainfall. The Mossi Plateau in north central Burkina Faso faces encroachment from the Sahara. The resultant southward migration means heightened competition for control of very limited water resources south of the Mossi Plateau. Most of the population ekes out a living as subsistence farmers, living with problems of climate, soil erosion, and rudimentary technology. The staple crops are pearl millet, sorghum, maize, and rice. The cash crops are cotton, groundnuts, karite (shea nuts), and sesame. Livestock, once a major export, has declined. 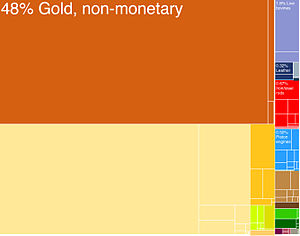 Industry, still in an embryonic stage, is located primarily in Bobo-Dioulasso, Ouagadougou, Banfora, and Koudougou. Manufacturing is limited to food processing, textiles, and other import substitution heavily protected by tariffs. Some factories are privately owned, and others are set to be privatized. Burkina Faso's exploitable natural resources are limited, although a manganese ore deposit is located in the remote northeast. Gold mining has increased greatly since the mid-1980s and, along with cotton, is a leading export moneyearner. However, both gold and cotton are listed as goods produced mostly by child labor and forced labor according to a recent U.S. Department of Labor report.[10]