The economy of Gujarat has significant agricultural as well as industrial production within India. Major Agricultural produce of the state include cotton, groundnuts (peanuts), dates, sugar cane, milk & milk products. Industrial products include cement and petrol.

The world's largest ship breaking yard is in Gujarat near Bhavnagar at Alang. Reliance Petroleum, one of the group companies of Reliance Industries Limited founded by Dhirubhai Ambani operates the oil refinery at Jamnagar which is the world's largest grass roots refinery.[1] The company has also planned another SEZ (special economic zone), in Jamnagar.[2][3]

Legatum Institute’s Global Prosperity Index 2012 has recognised Gujarat as the highest-scoring among all States of India on matters of social capital. The State ranks 15th in a list of 142 nations worldwide and actually ranks higher than several developed nations.

One of India's most industrialized states, Gujarat maintains a variety of industries, the principal ones being general and electrical engineering and the manufacture of textiles, vegetable oils, chemicals, soda ash, and cement. New industries include the production of fertilizers and petrochemicals. Major resources produced by the state include cotton, peanuts, dates, sugarcane, and petrol. The state is rich in calcite, gypsum, manganese, lignite, bauxite, limestone, agate, feldspar and quartz sand and successful mining of these minerals is done in their specified areas. Gujarat produces about 91% of India’s required amount of628+9 soda ash and gives the country about 66% of its national requirement of salt. Chemical Industries in Gujarat count for more than 35% of Indian Chemicals production.

It is one of India's most prosperous states, having a per-capita GDP significantly above India's average. Kalol Khambat and Ankaleshwar are today known for their oil and natural gas production. ‘Dhuvaran’ has a thermal power station, which uses coal, oil and gas. The Tarapur nuclear station in Maharashtra supplies the remaining power. Also on the Gulf of Khambat, 50 kilometers southeast of Bhavnagar, is the Alang Ship Recycling Yard (the world's largest). General Motors produces the ‘Astra’ car at Halol near Vadodara. Jalalpur is a large town of Gujarat, where several small and large textile industrial units have been established. Surat, a city by the Gulf of Khambat, is a hub of the global diamond trade.

Gujarat achieved as much as 35% of augmentation in its power generation capacity during the period 1995–96 and 2000–01. The producers (IPPs) have contributed significantly in this addition. As a matter of fact Gujarat is one of the first few states in India to have encouraged private sector investment and are already in operation. In addition the liquid cargo (chemicals) handling port at Dahej is also set up in joint sector and made operational. At an investor's summit entitled Vibrant Gujarat arranged between January 10, 2007 to January 13, 2007, at Science City, Ahmedabad, the state government signed 104 Memorandum of Understandings for Special Economic Zones totaling worth Rs 2.5 lakh crore.[4] However, most of the investment was from domestic industry.[5]

Gujarat is the main producer of tobacco, cotton, and groundnuts in India. Other major crops produced are rice, wheat, jowar, bajra, maize, tur, and gram. Gujarat has an agricultural economy; the total crop area amounts to more than one-half of the total land area.

Animal husbandry and dairying have played a vital role in the rural economy of Gujarat. Dairy farming, primarily concerned with milk production, functions on a cooperative basis and has more than a million members. Gujarat is the largest processor of milk in India. Amul milk co-operative federation products are well known all over India and is Asia's biggest dairy.[6] Among livestock raised are buffalo and other cattle, sheep, and goats. As per the results of livestock census 1997, there were 209.70 lakh livestock in Gujarat state. As per the estimates of the survey of major livestock products, during the year 2002–03 the Gujarat produced 6.09 million tonnes of milk, 385 million eggs and 2.71 million kg of wool. Gujarat also contributes inputs to industries like textiles, oil and soap. 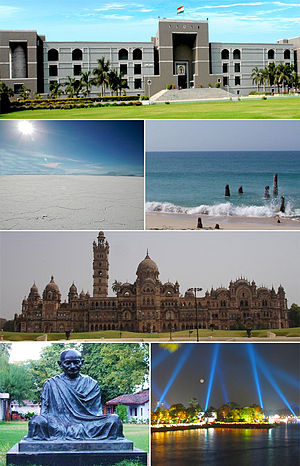 Gujarat has a large tourist potential

Gujarat Tourism refers to the Tourism in Gujarat, the seventh largest state in India, located in the western part of India with a coastline of 1600 km (longest in India). It is one of the most popular state in the country for tourists with annual footfall of 19.81 million tourists in 2010–11.[7] Gujarat offers scenic beauty from Great Rann of Kutch to the hills of Saputara. Gujarat is the sole home of the pure Asiatic Lions in world.[8] During the Sultanate reign, Hindu craftsmanship mix with Islamic architecture, giving rise to the Indo-Saracenic style. Many structures in the state are built in this fashion. It is also the birthplace of Mahatma Gandhi and Sardar Vallabhbhai Patel, the great iconic figures during India's Independence movement. Amitabh Bachchan is currently the brand ambassador of Gujarat Tourism. ‘Khushboo Gujarat Ki' campaign by Amitabh Bachchan has grown tourism in Gujarat by 14 per cent, twice that of national growth rate.[9]