The economy of Jersey is largely driven by international financial services and legal services, which accounted for 40.5% of total GVA in 2010.[6] Other sectors include construction, retail, agriculture, tourism and telecommunications.[7]

In 2008 Jersey’s gross national income per capita was among the highest in the world.[8] 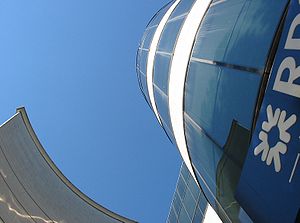 Jersey based financial organisations provide services to customers worldwide. In June 2008 it was reported that 12,070 people were employed full-time, within this sector.[10] The Royal Bank of Scotland International (RBSI) is a major employer with some 900 staff employed in Jersey, as of March 2009.[11] 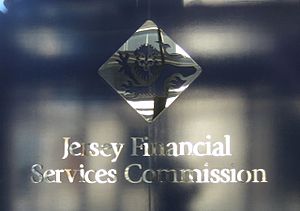 Jersey is one of the top worldwide Offshore financial centers[12] It is described by some as a tax haven.[13] It attracts deposits from customers outside of the island, seeking the advantages such places offer, like reduced tax burdens. Its taxation laws have been widely criticised by various people and groups,[14] however the former Chief Minister of Jersey, Terry Le Sueur, has countered these criticisms, saying that "Jersey [is] among cooperative finance centres".[15] And in September 2013 the UK Prime Minister, David Cameron, said it was not fair any longer to refer to any of the overseas territories or Crown dependencies as tax havens, as they have taken action to make sure that they have fair and open tax systems.House of Commons Hansard 9 Sept 2013 Its information privacy law also provides exemptions that other European countries do not, for example in the way Trusts do not have to disclose as much information to Benficiaries about use of their personal data as is normally required under such laws.[16]

Jersey's finance industry featured in a BBC Panorama documentary, titled "Tax me if you can",[17] first broadcast on 2 February 2009.[18]

On 4 February 2009 Jersey Finance officially announced its intention to open a new representative office in London.[19]

The first regulated Bitcoin fund was established in Jersey in July 2014, with the approval of the Jersey Financial Services Commission, after island leaders expressed a desire for Jersey to become a global center for digital currencies. At the time of the establishment of the fund by a Jersey-based hedge fund company, Bitcoin was already being accepted by some local businesses.[21]

Construction represented 5.2% of GVA during 2007. In June 2008 it was reported that 4,980 people were employed full-time in the construction and quarrying sector.[10]

St. Helier, and the Waterfront area in particular, has seen much redevelopment during the early 21st century, with several projects in planning or under-construction during 2009. Developments include a leisure complex,[22] the Radisson hotel,[23] and a new central bus station - Liberation Station. As of 2009 there are plans to sink the A1 road, to provide building sites above it for offices,[24] possibly for financial companies.

As of June 2008 there were 6,610 persons in full-time employment within Jersey's wholesale & retail trades.[10]

Sandpiper C.I. Limited operate a chain of stores in Jersey, their franchises include well-known names, such as Marks & Spencer, Iceland, and Costa Coffee.[25]

A number of online retailers, and fulfillment houses operate from the Channel Islands, including Jersey, supplying a variety of low-value goods such as CDs, DVDs, video games, and gadgets. Residents of the EU were choosing to order goods from Jersey, so as to benefit from a tax relief known as Low-value consignment relief (LVCR). UK residents, in particular, were taking advantage of this situation.

A local company, play.com grew substantially during the time that LVCR applied to Jersey. Notably, Amazon UK also took advantage of this by dispatching some low-value items from Jersey.

In April 2012 the UK Government made law changes to prevent the Channel Islands continued exploitation of LVCR, meaning that UK residents would have to pay the full VAT amount on items imported from the Channel Islands.[26] Some goods are still sold and distributed from Jersey, despite these changes.

Potatoes, cauliflower, tomatoes, and flowers are important export crops, shipped mostly to the United Kingdom. The Jersey breed of dairy cattle is known worldwide and represents an important export income earner. Milk products go to the UK and other EU countries.

As of 2009 the Jersey Royal potato is the biggest crop export. 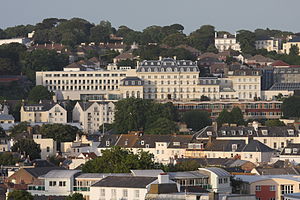 Jersey saw a boom in tourism during the post-World War II years. This boom has been winding down since the late-1980s. Many of the larger hotels, which were constructed during the boom, have now been demolished.

Visitors to the island arrive either by sea at Saint Helier, or by air at Jersey Airport. These routes are subsidised by the States of Jersey.[27] Exact figures for subsidies are not in the public domain.

Most tourist attractions are operated by private companies, including companies owned, or funded by the States of Jersey. Elizabeth Castle, for example, is controlled by Jersey Heritage. Some other attractions are owned by the National Trust for Jersey.

In 2011 visitor numbers rose by 0.6%, with a notable increase in visitors from Germany, and France. It was reported that tourist and business visitors spent a total of £242m while on the island.[29]

Most of the telecoms infrastructure is owned by Jersey Telecom.

In 2008, most goods imported and exported were transported by Huelin-Renouf,[31] Condor Logistics,[32] and other smaller operators, via either Saint Helier harbour, or Jersey Airport.

During the period 1984 to 1994, British Channel Island Ferries were responsible for much shipping to and from the United Kingdom.

Jersey shares the Channel Islands Stock Exchange (CISX/Exchange) with Guernsey, where it is based.[33]

The workforce in Jersey tends to increase during the summer months, with around 3,500 more people employed in the summer of 2008 than in the winter of 2007.[8] These seasonal workers are mostly employed in agriculture, hotels, restaurants and bars.

Until the 19th century, cider was the largest agricultural export with up to a quarter of the agricultural land given over to orchards. In 1839 for example, 268,199 imperial gallons (1,219,260 L) of cider were exported from Jersey to England alone,[34] but by 1870 exports from Jersey had slumped to 4,632 imperial gallons (21,060 L).[35] Beer had replaced cider as a fashionable drink in the main export markets, and even the home market had switched to beer as the population became more urban. Potatoes overtook cider as the most important crop in Jersey in the 1840s. Small-scale cider production on farms for domestic consumption, particularly by seasonal workers from Brittany and mainland Normandy, was maintained, but by the mid-20th century production dwindled until only eight farms were producing cider for their own consumption in 1983.[36] The number of orchards had been reduced to such a level that the destruction of trees in the Great Storm of 1987 demonstrated how close the Islands had come to losing many of its traditional cider apple varieties. A concerted effort was made to identify and preserve surviving varieties and new orchards were planted. As part of diversification, farmers have moved into commercial cider production, and the cider tradition is celebrated and marketed as a heritage experience.

The knitting of woollen garments was a thriving industry for Jersey during the 17th and 18th centuries.[37]

Until the twentieth century, the States relied on indirect taxation to finance the administration of Jersey. The levying of impôts (duties) was in the hands of the Assembly of Governor, Bailiff and Jurats until 1921 when that body's tax raising powers were transferred to the Assembly of the States, leaving the Assembly of Governor, Bailiff and Jurats to serve simply as licensing bench for the sale of alcohol. The Income Tax Law of 1928 introducing income tax was the first law drafted entirely in English. Income tax has been levied at a flat rate of 20% for decades.

Historically, no VAT was levied in Jersey, with the result that luxury goods have often been cheaper than in the UK or in France. This provided an incentive for tourism from neighbouring countries. The absence of VAT also led to the growth of a fulfilment industry, whereby low-value luxury items, such as videos, lingerie and contact lenses are exported in a manner avoiding VAT on arrival, thus undercutting local prices on the same products. In 2005 the States of Jersey announced limits on licences granted to non-resident companies trading in this way. The States of Jersey introduced a goods and services tax (GST) in 2008. Although this is a form of VAT, it has been charged at a much lower rate than UK or French VAT, and as such Jersey's fulfilment industry continues.

The strategy for introducing the new GST tax was to fill a 'black hole' in the budget that was created by the introduction of a new 0/10 tax that replaced the old tax system that previously exempted foreign investors from corporation tax and levied a 20% rate on Jersey residents. The new 0/10 tax exempts all businesses except those in financial services from having to pay any corporation tax (0%), while leaving the financial services to pay a low tax rate (10%). The income generated from the new 0/10 tax proposal will not be equal to the revenue of the original tax system and this leaves Jersey with a deficit in their budget of several million pounds.

To fill the deficit created by the changes made to Jersey's tax structure, the States of Jersey introduced GST. GST is added to most goods and services, which has raised the cost of living. The people hit the hardest by the new GST will be the people on the lowest incomes, however, to try to prevent islanders living below the poverty line, the States of Jersey introduced an Income Support service in January 2008.

It is arguable that the people who benefit from Jersey's new tax structure are the owners of the large businesses that are separate or support the financial service based businesses. This is because they do not have to pay any corporation tax but will still benefit from the island's business.[38]