Tunisia is in the process of economic reform and liberalization after decades of heavy state direction and participation in the economy. Prudent economic and fiscal planning have resulted in moderate but sustained growth for over a decade. Tunisia's economic growth historically has depended on oil, phosphates, agri-food products, car parts manufacturing, and tourism. In the World Economic Forum Global Competitiveness Report for 2015-2016, Tunisia ranks in 92nd place.[12] Based on HDI latest report (for 2014), Tunisia ranks 96th globally and 5th in Africa.

The year of 2015 was marked by terrorist attacks in Tunisia which are likely to impact economic growth, especially because of Tourism, one of the main sectors.[13]

Growing foreign debt and the foreign exchange crisis in the mid-1980s. In 1986, the government launched a structural adjustment program to liberalize prices, reduce tariffs, and reorient Tunisia toward a market economy. 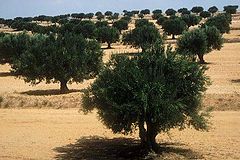 Tunisia's economic reform program has been lauded as a model by international financial institutions. The government has liberalized prices, reduced tariffs, lowered debt-service-to-exports and debt-to-GDP ratios, and extended the average maturity of its $10 billion foreign debt. Structural adjustment brought additional lending from the World Bank and other Western creditors. In 1990, Tunisia acceded to the General Agreement on Tariffs and Trade (GATT) and is a member of the World Trade Organization (WTO).

In 1996 Tunisia entered into an "Association Agreement" with the European Union (EU) which removes tariff and other trade barriers on most goods by 2008. In conjunction with the Association Agreement, the EU is assisting the Tunisian government's Mise A Niveau (upgrading) program to enhance the productivity of Tunisian businesses and prepare for competition in the global marketplace.

The government has totally or partially privatized around 160 state-owned enterprises since the privatization program was launched in 1987. Although the program is supported by the GATT, the government has had to move carefully to avoid mass firings. Unemployment continues to plague Tunisia's economy and is aggravated by a rapidly growing work force. An estimated 55% of the population is under the age of 25. Officially, 15.2% of the Tunisian work force is unemployed.

In 2011, after the Arab Spring, the economy slumped but then recovered with a 2.81% GDP growth in 2014. However, unemployment is still one of the major issues with 15.2% of the labor force unemployed as of the first quarter of 2014. Tunisia’s political transition gained new momentum in early 2014, with the resolution of a political deadlock, the adoption of a new Constitution and the appointment of a new government. The national dialogue platform, brokered by key civil society organizations, played a crucial role in gathering all major political parties. This consensus will allow for further reform in the economy and public sector.

In 2015, the Bardo National Museum attack led to the collapse of the third largest sector of Tunisia's economy,[15] tourism. Tunisian tourist workers in Tunis have said that "tourism is dead, it is completely dead" expressing the severe drop in tourism after the attack.[16]

The Bourse de Tunis is under the control of the state-run Financial Market Council and lists over 50 companies. The government offers substantial tax incentives to encourage companies to join the exchange, and expansion is occurring.

For 2007, foreign direct investment totaled TN Dinar 2 billion in 2007, or 5.18% of the total volume of investment in the country. This figure is up 35.7% from 2006 and includes 271 new foreign enterprises and the expansion of 222 others already based in the country.

The economic growth rate seen for 2007, at 6.3% is the highest achieved in a decade.

On April 20, 2012, U.S. Treasury Secretary[19] and Tunisian Finance Minister Houcine Dimassi signed a declaration of intent[20] to move forward on a U.S. loan guarantee for Tunisia. The U.S. Government would provide this loan guarantee to enable the Tunisian government to access significant market financing at affordable rates and favorable maturities with the backing of a U.S. guarantee of principal and interest (up to 100 percent).

The support would consist of the U.S. guarantee of Tunisian government-issued debt (or of bank loans made to the Government of Tunisia). This guarantee will significantly reduce the Tunisian government's borrowing costs at a time when market access has become more expensive for many emerging market countries. In the weeks ahead, both governments intend to make progress on a loan guarantee agreement that would allow Tunisia to move forward with a debt issuance.

The ceremony took place at the World Bank immediately following the meeting of Finance Ministers of the Deauville Partnership with Arab Countries in Transition.