Economy of the Republic of the Congo 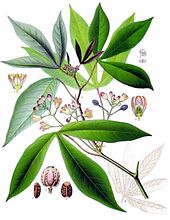 Cassava is an important food crop in the Republic of Congo.

The economy of the Republic of the Congo is a mixture of subsistence hunting and agriculture, an industrial sector based largely on petroleum extraction and support services, and a government spending,[4] characterized by budget problems and overstaffing. Petroleum has supplanted forestry as the mainstay of the economy, providing a major share of government revenues and exports.[4] Nowadays the country is increasingly converting natural gas to electricity rather than burning it, greatly improving energy prospects.[4]

Earlier in the 1990s, Congo's major employer was the state bureaucracy, which had a payroll of 80,000, which is enormous for a country of Congo's size. The World Bank and other international financial institutions pressured Congo to institute sweeping civil service reforms in order to reduce the size of the state bureaucracy and pare back a civil service payroll that amounted to more than 20% of GDP in 1993. The effort to cut back began in 1994 with a 50% devaluation that cut the payroll in half in dollar terms and by a mid-year reduction of nearly 8,000 in civil service employment and resulted in inflation of 61%. Inflation has since subsided.

Between 1994-96, the Congolese economy underwent a difficult transition. The prospects for building the foundation of a healthy economy, however, were better than at any time in the previous 15 years. Congo took a number of measures to liberalize its economy, including reforming the tax, investment, labor, and hydrocarbon codes. Planned privatizations of key parastatals, primarily telecommunications and transportation monopolies, were launched to help improve a dilapidated and unreliable infrastructure. To build on the momentum achieved during the two-year period, the International Monetary Fund (IMF) approved a three-year ESAF economic program in June 1996.

By the end of 1996, Congo had made substantial progress in various areas targeted for reform. It made significant strides toward macroeconomic stabilization through improving public finances and restructuring external debt. This change was accompanied by improvements in the structure of expenditures, with a reduction in personnel expenditures. Further, Congo benefited from debt restructuring from a Paris Club agreement in July 1996.

This reform program came to a halt, however, in early June 1997 when war broke out. Denis Sassou-Nguesso, who returned to power when the war ended in October 1997, publicly expressed interest in moving forward on economic reforms and privatization and in renewing cooperation with international financial institutions.[4] However, economic progress was badly hurt by slumping oil prices in 1998, which worsened the Republic of the Congo's budget deficit.[4] A second blow was the resumption of armed conflict in December 1998.

Congo's economic prospects remain largely dependent on the country's ability to establish political stability and democratic rule. The World Bank is considering Congo for post-conflict assistance. Priorities will be in reconstruction, basic services, infrastructure, and utilities. President Sassou has publicly expressed interest in moving forward on economic reforms and privatization, as well as in renewing cooperation with international financial institutions. However, the return of armed conflict in 1998 hindered economic reform and recovery.

The Congo's growing petroleum sector is by far the country's major revenue earner. In the early 1980s, rapidly rising oil revenues enabled the government to finance large-scale development projects with GDP growth averaging 5% annually, one of the highest rates in Africa. However, the government has mortgaged a substantial portion of its oil earnings, contributing to the government's shortage of revenues. The Congolese oil sector is dominated by the French parastatal oil company Elf Aquitaine, which accounts for 70% of the country's annual oil production. In second position is the Italian oil firm eni. Chevron, independent CMS Nomeco, and Exxon Mobil are among the American companies active in petroleum exploration or production. Following recent discoveries and oil fields currently under development, Congo's oil production is expected to continue to rise significantly in the next few years.[citation needed]

See also: Mining in the Republic of Congo 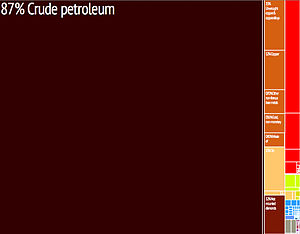