Faure was born in Béziers, Languedoc-Roussillon, to a French army doctor. He was nearsighted yet a brilliant student since young age, earning a bachelor's degree at 15, and a law degree at 19 in Paris.[1][2] At 21 years of age he became a member of the Bar, the youngest lawyer in France to do so at the time. While living in Paris, he became active in Third Republic politics, and joined the Radical Party.

During the German occupation of World War II, he joined the French Resistance in the Maquis, and in 1942 fled to Charles de Gaulle's headquarters in Algiers, where he was made head of the Provisional Government of the Republic's legislative department. At the end of the war he served as French counsel for the prosecution at the Nuremberg Trials.

In 1946, he was elected to the French Parliament as a Radical.[2] While the popularity of his party declined to less than 10 per cent of the total vote, none of the other parties was able to gain a clear majority. As such, early on, Faure’s party often played a disproportionately important role in the formation of French governments. In this, he led the cabinet in 1952 and from 1955 to 1956. Faure was a leader of the more conservative wing of the party, opposing the party's left under Pierre Mendès-France.

Faure's views changed during the Fourth Republic, and after initial opposition to the Fifth Republic (he voted against presidential election by universal suffrage in the 1962 referendum), he eventually became a Gaullist. De Gaulle's party, the Union for the New Republic, sent him on an unofficial mission to the People's Republic of China in 1963. In government he served in successive ministries: Agriculture (1966–1968), National Education (1968–1969, where he was responsible for pushing through reform of the universities), and Social Affairs (1972–1973). He declined to be a candidate at the 1974 presidential election, and supported Valéry Giscard d'Estaing against the Gaullist candidate Jacques Chaban-Delmas.

He had the reputation of a careerist and the nickname of "weathercock". He replied with humour that "it is not the weathercock which turns; it is the wind!". 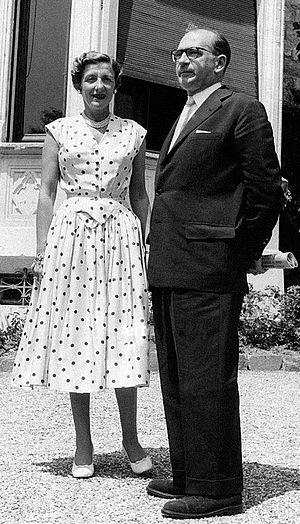 In 1931 Faure married Lucie Meyer, a daughter of a silk merchant one month his senior. They spent their one-month-long honeymoon in the Soviet Union.[1]

He published the following books: