The Edinburgh International Festival is an annual festival of performing arts in Edinburgh, Scotland, over three weeks from around the middle of August. By invitation from the Festival Director, the International Festival brings top class performers of music (especially classical music), theatre, opera and dance from around the world to perform. The festival also hosts a series of visual art exhibitions, talks and workshops. 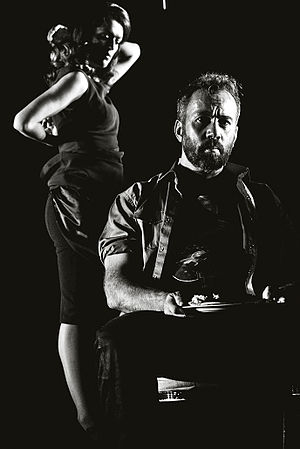 The idea of the Festival with a remit to "provide a platform for the flowering of the human spirit" and enrich the cultural life of Scotland, Britain and Europe took form in the wake of the Second World War. The idea of creating an international festival within the UK was first conceived by Rudolf Bing, the General Manager of Glyndebourne Opera Festival, and Audrey Mildmay (wife of John Christie) during a wartime tour of a small-scale Glyndebourne production of The Beggar's Opera.[1]

Rudolf Bing co-founded the Festival with Henry Harvey Wood, Head of the British Council in Scotland, Sidney Newman, Reid Professor of Music at Edinburgh University, and a group of civic leaders from the City of Edinburgh, in particular Sir John Falconer.

Bing had looked at several English cities before shifting his focus to Scotland and settling on Edinburgh, a city he had visited and admired in 1939. Harvey Wood described the meeting at which the idea was hatched,

The Edinburgh International Music of Festival and Drama was first discussed over a lunch table in a restaurant in Hanover Square, London, towards the end of 1944. Rudolf Bing, convinced that musical and operatic festivals on anything like the pre-war scale were unlikely to be held in any of the shattered and impoverished centres for many years to come, was anxious to consider and investigate the possibility of staging such a Festival somewhere in the United Kingdom in the summer of 1946. He was convinced and he convinced my colleagues and myself that such an enterprise, successfully conducted, might at this moment of European time, be of more than temporary significance and might establish in Britain a centre of world resort for lovers of music, drama, opera, ballet and the graphic arts. 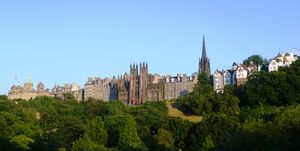 The Old Town of Edinburgh from Princes Street

Certain preconditions were obviously required of such a centre. It should be a town of reasonable size, capable of absorbing and entertaining anything between 50,000 and 150,000 visitors over a period of three weeks to a month. It should, like Salzburg, have considerable scenic and picturesque appeal and it should be set in a country likely to be attractive to tourists and foreign visitors. It should have sufficient number of theatres, concert halls and open spaces for the adequate staging of a programme of an ambitious and varied character. Above all it should be a city likely to embrace the opportunity and willing to make the festival a major preoccupation not only in the City Chambers but in the heart and home of every citizen, however modest. Greatly daring but not without confidence I recommended Edinburgh as the centre and promised to make preliminary investigations.[2]

Wood approached Falconer, who enthusiastically welcomed the initiative on behalf of the city. As it was too late to finalise arrangements for 1946, plans were made for the following year. The first International Festival (and the first "Festival Fringe", although it wasn't known as such in the first year) took place between 22 August and 11 September 1947. The Festival has since taken place every August.

The first Festival concentrated mainly on classical music, a highlight being concerts given by the Vienna Philharmonic, reunited with their erstwhile conductor Bruno Walter who had left Europe after the Nazi occupation of his homeland.[3] The Festival's first dramatic success came in the following year when an adaptation of Sir David Lyndsay's The Thrie Estaites was performed to great acclaim for the first time since 1552 in the Assembly Hall on the Mound.[4] The British Army's desire to showcase itself during the Festival period led to the independent staging of the first Edinburgh Military Tattoo, featuring displays of piping and dancing, in 1950. This annual event has come to be regarded as an integral part of the official festival, though it continues to be organised separately.[5] 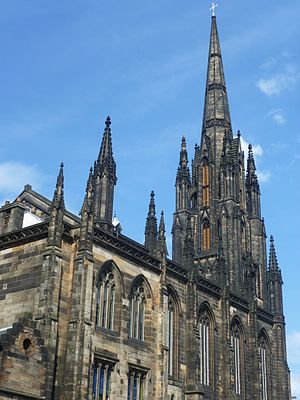 The 240-foot-high spire of the Hub, seen from Johnston Terrace

In 1999, the Festival opened a new central box office and information centre in The Hub, a converted church on Castlehill, directly below Edinburgh Castle. Originally built as the Tolbooth Church (1842-44) to house the General Assembly of the Church of Scotland, its tall gothic spire is the highest point in central Edinburgh (outside of the Castle) and a landmark visible for miles around.

The Edinburgh International Festival will be brought forward in 2015 to coincide with the Fringe festival held in the city every year, according to the festival's director designate Fergus Linehan.[6]

The principal venues of the Festival are:

Other festivals in Edinburgh