From Infogalactic: the planetary knowledge core
Jump to: navigation, search
This article is about the pirate captain Edward (Seegar) England. For the West Virginia Attorney General, see Edward T. England. 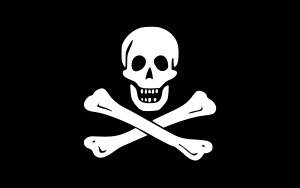 Edward England, born Edward Seegar (c.1685–1721)[3][4] was a famous African coast and Indian Ocean pirate captain from 1717 to 1720. The ships he sailed on included the Pearl (which he renamed The Royal James) and later the Fancy, for which England exchanged the Pearl in 1720. His flag was the classic Jolly Roger — almost exactly as Black Sam Bellamy before him used — with a skull above two crossed Humerus bones[dubious – discuss] on a black background.

Born in Ireland as Edward Seegar sometime around 1685[5] He was probably raised as a Catholic.[6] He was said to be an educated man.[7] Seegar changed his surname to England when he turned pirate.[8] England made his way to Jamaica and during the War of Spanish Succession he served as a privateer.[9] He was captured by the pirate captain Christopher Winter and forced to join the crew.[10] Winter most likely took England to the pirate base on Nassau, Bahamas. England took part in Henry Jennings assault on the Spanish salvage camp at Palma de Ayz, Florida, stealing £87,000 in gold and silver.[11] England is next reported as Charles Vane's quartermaster, in March 1718. Vane's sloop, the Lark was captured by the Royal Navy, but England and the rest of the crew were released to induce the other pirates of Nassau to accept the King's pardon.[12]

Vane granted England command of a captured vessel in mid-1718. England decided not to accept the King's pardon. He sailed to the Coast of Africa, after the arrival of Woodes Rogers in New Providence. During the voyage to the Coast of Africa he took several ships, particularly the Cadogan captained by a man called Skinner. Some of England's crew murdered Skinner who they had previously served under because he had failed to pay their wages. As soon as Skinner came on board, he saw his old Boatswain, who said, ″Ah! Captain Skinner is it you, I am much in your debt, and now I shall pay you in your own coin″. They immediately seized Captain Skinner, bound him to the windlass and pelted him with glass bottles. Afterwards they said, because he had been a good Master he should have an easy death, and so shot him through the head. England also encountered Howell Davis on that ship. Davis was a likeable man and easily gained favour with England, however Davis refused to sign articles with the pirates saying he would rather die. This impressed England who saw a lot of potential in Davis and he gave the command of the Cadogan to him.[13] England eventually exchanged his sloop for a larger ship called, the Pearl renaming it the Royal James and returned to Africa in the spring of 1719. Between the River Gambia and Cape Coast, the pirates took ten ships. After which England took two more ships, one the pirates named her Victory and made John Taylor the captain. England and his crew stayed for some time in an African town, but a conflict arose over the pirates' treatment of the local women. Fighting broke out, the pirates burned the town, and set sail.

By 1720, England had reached the Indian Ocean, where he met with fellow pirate Captain Oliver la Buse. England captured a thirty-four gun Dutch ship, which he named Fancy in honour of Henry Every, and he made the Fancy his new flagship. England decided to attack an East Indiaman under the command of James Macrae, the Cassandra, near the island of Comoros. A long and bloody battle ensued, and both ships ran aground. Macrae and his surviving crew escaped and hid on the island for ten days. Finally Macrae, who was injured, tired, and hungry, went aboard England's consort the Victory, hoping for mercy, and surrendered to the pirates. The cargo of the Cassandra was valued at £75,000. Ninety of the Fancy's crew died in the attack on the Cassandra.[14] England had a good nature and unusual kindness, in that he didn't believe in torturing captives unless they couldn't otherwise be persuaded.[15] England ordered Macrae's life spared, and the pirates kept the Cassandra and gave the heavily damaged Fancy to Macrae. England's quartermaster, John Taylor, who was now captain of the Victory, resented this choice, and only agreed after England got him drunk. England then captured a small English ship near Cochin, the drunk captain reporting a false rumour that Macrae was preparing a fleet to chase the pirates. This enraged the pirates, particularly Taylor, who had wanted to kill Macrae. Around this time, Taylor organised a vote to remove England from command.

File:Pirate England.jpg
An engraving depicting the pirate Edward England with, in the background, the fight of the Fancy (left) and the Cassandra.

England was subsequently marooned on Mauritius with three other crew members without adequate provisions.[16] After about four months they built a small boat and managed to sail across the Indian Ocean and made it to St. Augustine's Bay in Madagascar.[17] One of the men marooned with England who had also defended Macrae was described as "a man with a terrible pair of whiskers and a wooden leg, being stuck round with pistols," and is said to have been the model for Robert Louis Stevenson's character Long John Silver.[18][unreliable source?] England survived for a while on the charity of other pirates,[19] possibly some of Henry Every's old crew.[20] He died in 1721,[21] from ″severe Strings of his Conscience″ according to the unreliable account of a sailor named Downing.[22] In all probability[vague] he died quickly after contracting a deadly disease.[citation needed]

Edward England is known today as one of the more humane pirate captains of the Golden Age of Piracy.

He had a great deal of good Nature, and did not want for Courage ; he was not avaritious, and always averse to the ill Usage of Prisoners received : He would have been contented with moderate Plunder, and less mischievous Pranks, could his Companions have been brought to the same Temper, but he was generally over-rul'd, and as he was engaged in that abominable Society, he was obliged to be a Partner in all their vile Actions.—Captain Charles Johnson.[23]