From Infogalactic: the planetary knowledge core
Jump to: navigation, search
This article is about the astronomer. For the politician, see Edwin N. Hubbell. For the jazz trombonist, see Eddie Hubble.

Edwin Powell Hubble (November 20, 1889 – September 28, 1953)[1] was an American astronomer who played a crucial role in establishing the field of extragalactic astronomy and is generally regarded as one of the most important observational cosmologists of the 20th century. Hubble is known for showing that the recessional velocity of a galaxy increases with its distance from the earth, implying the universe is expanding,[2] known as "Hubble's law" although this relation had been discovered previously by Georges Lemaître, who published his work in a less visible journal.

Edwin Hubble is also known for providing substantial evidence that many objects then classified as "nebulae" were actually galaxies beyond the Milky Way.[3] American astronomer Vesto Slipher provided the first evidence for this argument almost a decade before.[4][5]

Edwin Hubble was born to Virginia Lee James (1864–1934)[6] and John Powell Hubble, an insurance executive, in Marshfield, Missouri, and moved to Wheaton, Illinois, in 1900.[7] In his younger days, he was noted more for his athletic prowess than his intellectual abilities, although he did earn good grades in every subject except for spelling. Edwin was a gifted athlete playing baseball, football, basketball, and he ran track in both high school and college. He played a variety of positions on the basketball court from center to shooting guard. In fact Hubble even led the University of Chicago's basketball team to their first conference title in 1907.[8] He won seven first places and a third place in a single high school track and field meet in 1906.

His studies at the University of Chicago were concentrated on mathematics and astronomy, which led to a bachelor of science degree in 1910. Hubble also became a member of the Kappa Sigma Fraternity. He spent the three years at The Queen's College, Oxford after earning his bachelors as one of the university's first Rhodes Scholars, initially studying jurisprudence instead of science (as a promise to his dying father),[9] and later added literature and Spanish,[9] and earning his master's degree.[10]

In 1909, Hubble's father moved his family from Chicago to Shelbyville, Kentucky, so that the family could live in a small town, ultimately settling in nearby Louisville. His father died in the winter of 1913, while Edwin was still in England, and in the summer of 1913, Edwin returned to care for his mother, two sisters, and younger brother, as did his brother William. The family moved once more to Everett Avenue, in Louisville's Highlands neighborhood, to accommodate Edwin and William.[11]

Hubble was also a dutiful son, who despite his intense interest in astronomy since boyhood, surrendered to his father's request to study law, first at the University of Chicago and later at Oxford, though he managed to take a few math and science courses. After the death of his father in 1913, Edwin returned to the Midwest from Oxford, but did not have the motivation to practice law. So he taught Spanish, physics, and mathematics at the New Albany High School in New Albany, Indiana for a year before he resolved to start over, at the age of 25, to become a professional astronomer.

He also coached the boys' basketball team there. After a year of high-school teaching, he entered graduate school with the help of his former professor from the University of Chicago to study astronomy at the Yerkes Observatory of the University, where he received his PhD in 1917. His dissertation was titled Photographic Investigations of Faint Nebulae.

After the United States declared war on Germany in 1917, Hubble rushed to complete his PhD dissertation so he could join the military. Hubble volunteered for the United States Army and was assigned to the newly created 86th Division. He rose to the rank of lieutenant colonel,[12] and was found fit for overseas duty on July 9, 1918, but the 86th Division never saw combat. After the end of World War I, Hubble spent a year in Cambridge, where he renewed his studies of Astronomy.[13] In 1919, Hubble was offered a staff position at the Carnegie Institution's Mount Wilson Observatory, near Pasadena, California, by George Ellery Hale, the founder and director of the observatory. Hubble remained on staff at Mount Wilson until his death in 1953. Shortly before his death, Hubble became the first astronomer to use the newly completed giant 200-inch (5.1 m) reflector Hale Telescope at the Mount Palomar Observatory near San Diego, California.

Hubble also served in the U.S. Army at the Aberdeen Proving Ground during World War II. For his work there, he received the Legion of Merit award.

Although Hubble was raised as a Christian, he later became an agnostic.[14][15]

Hubble had a heart attack in July 1949 while on vacation in Colorado. He was taken care of by his wife, Grace Hubble, and continued on a modified diet and work schedule. He died of cerebral thrombosis (a spontaneous blood clot in his brain) on September 28, 1953, in San Marino, California. No funeral was held for him, and his wife never revealed his burial site.[16][17][18]

The universe goes beyond the Milky Way galaxy 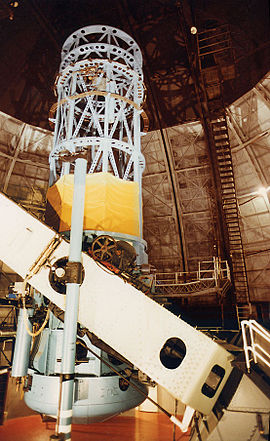 The 100-inch Hooker telescope at Mount Wilson Observatory that Hubble used to measure galaxy distances and a value for the rate of expansion of the universe.

Edwin Hubble's arrival at Mount Wilson Observatory, California in 1919 coincided roughly with the completion of the 100-inch (2.5 m) Hooker Telescope, then the world's largest. At that time, the prevailing view of the cosmos was that the universe consisted entirely of the Milky Way Galaxy. Using the Hooker Telescope at Mt. Wilson, Hubble identified Cepheid variables (a kind of star that is used as a means to determine the distance from the galaxy[19][20] – see also standard candle) in several spiral nebulae, including the Andromeda Nebula and Triangulum. His observations, made in 1922–1923, proved conclusively that these nebulae were much too distant to be part of the Milky Way and were, in fact, entire galaxies outside our own. This idea had been opposed by many in the astronomy establishment of the time, in particular by the Harvard University-based Harlow Shapley. Despite the opposition, Hubble, then a thirty-five-year-old scientist, had his findings first published in The New York Times on November 23, 1924,[21] and then more formally presented in the form of a paper at the January 1, 1925 meeting of the American Astronomical Society.[22] 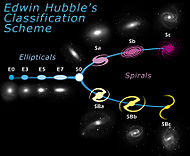 Hubble's findings fundamentally changed the scientific view of the universe. Supporters of Hubble's expanding universe theory state that Hubble's discovery of nebulae outside of our galaxy helped pave the way for future astronomers.[23] Although some of his more renowned colleagues simply scoffed at Hubble's idea of an expanding universe, Hubble ended up publishing his findings on nebulae. This published work earned him an award titled the American Association Prize and five hundred dollars from Burton E. Livingston of the Committee on Awards.[8]

Hubble also devised the most commonly used system for classifying galaxies, grouping them according to their appearance in photographic images. He arranged the different groups of galaxies in what became known as the Hubble sequence.[24]

In 1929, Hubble examined the relation between distance and redshift of galaxies, combining his own measurements of galaxy distances based on Henrietta Swan Leavitt's period-luminosity relationship for Cepheids together with earlier data from fellow astronomer Vesto Slipher plus Milton L. Humason's measurements. He found a rough proportionality of these objects' distances with their redshifts,[2] nowadays termed Hubble's law.

Yet the reason for the redshift remained unclear. It was Georges Lemaître, a Belgian Catholic priest and physicist, who found that Hubble's observations supported the Friedmann model of an expanding universe based on Einstein's equations for General Relativity, which is now known as the Big Bang theory. This meant, the greater the distance between any two galaxies, the greater their relative speed of separation. If interpreted that way, Hubble's measurements on 46 galaxies lead to a value for the Hubble Constant of 500 km/s/Mpc, which is much higher than the currently accepted value due to errors in their distance calibrations.

Hubble himself remained doubtful about Lemaître's interpretation. In 1931 he wrote a letter to the Dutch cosmologist Willem de Sitter expressing his opinion on the theoretical interpretation of the redshift-distance relation:[25]

Mr. Humason and I are both deeply sensible of your gracious appreciation of the papers on velocities and distances of nebulae. We use the term 'apparent' velocities to emphasize the empirical features of the correlation. The interpretation, we feel, should be left to you and the very few others who are competent to discuss the matter with authority.

Today, the "apparent velocities" in question are understood as an increase in proper distance that occurs due to the expansion of space. Light traveling through stretching space will experience a Hubble-type redshift, a mechanism different from the Doppler effect (although the two mechanisms become equivalent descriptions related by a coordinate transformation for nearby galaxies).

In the 1930s, Hubble was involved in determining the distribution of galaxies and spatial curvature. These data seemed to indicate that the universe was flat and homogeneous, but there was a deviation from flatness at large redshifts. According to Allan Sandage,

Hubble believed that his count data gave a more reasonable result concerning spatial curvature if the redshift correction was made assuming no recession. To the very end of his writings he maintained this position, favouring (or at the very least keeping open) the model where no true expansion exists, and therefore that the redshift "represents a hitherto unrecognized principle of nature."[26]

There were methodological problems with Hubble's survey technique that showed a deviation from flatness at large redshifts. In particular, the technique did not account for changes in luminosity of galaxies due to galaxy evolution. Earlier, in 1917, Albert Einstein had found that his newly developed theory of general relativity indicated that the universe must be either expanding or contracting. Unable to believe what his own equations were telling him, Einstein introduced a cosmological constant (a "fudge factor") to the equations to avoid this "problem". When Einstein learned of Hubble's redshifts, he immediately realized that the expansion predicted by General Relativity must be real, and in later life he said that changing his equations was "the biggest blunder of [his] life." In fact, Einstein apparently once visited Hubble and tried to convince him that the universe was expanding.[27] Hubble also discovered the asteroid 1373 Cincinnati on August 30, 1935. He wrote The Observational Approach to Cosmology and The Realm of the Nebulae approximately during this time.

At the time, the Nobel Prize in Physics did not recognize work done in astronomy. Hubble spent much of the later part of his career attempting to have astronomy considered an area of physics, instead of being its own science. He did this largely so that astronomers—including himself—could be recognized by the Nobel Prize Committee for their valuable contributions to astrophysics. This campaign was unsuccessful in Hubble's lifetime, but shortly after his death, the Nobel Prize Committee decided that astronomical work would be eligible for the physics prize.[8] However, the prize is not one that can be awarded posthumously.

Often called a "pioneer of the distant stars," astronomer Edwin Hubble (1889–1953) played a pivotal role in deciphering the vast and complex nature of the universe. His meticulous studies of spiral nebulae proved the existence of galaxies other than our own Milky Way. Had he not died suddenly in 1953, Hubble would have won that year's Nobel Prize in Physics.

The other scientists on the "American Scientists" sheet include Gerty Cori, biochemist; Linus Pauling, chemist, and John Bardeen, physicist.