The Efik are an ethnic group located primarily in southeastern Nigeria, in the southern part of Cross River State. The Efik speak the Efik language which is a Benue–Congo language of the Cross River family. The Efik migrated down the Cross River from Arochukwu and founded numerous settlements in the Calabar and Creek Town area. They had sojourned from Nubia through to Ghana and then Arochukwu in present day Nigeria. After staying there for about 400 years as guests (11th - 15th century), they left after a disagreement with the Aros. The bulk of them left to Uruan in present day Akwa Ibom State, some to Eniong and surrounding areas. They stayed in Uruan for about a hundred or so years and then moved to Ikpa Ene and Ndodihi briefly before crossing over to their final destination in Creek Town (Esit Edik / Obio Oko). Creek Town and its environs are often commonly referred to as Calabar, and its people as Calabar people, after the European name Calabar Kingdom given to the state [in present-day Cross River State. Calabar is not to be confused with the Kalabari Kingdom in Rivers State which is an Ijaw state to its west. Cross River State with Akwa Ibom State was formerly one of the original twelve states of Nigeria known as the Southeastern State.

The Efik people also occupy southwestern Cameroon including Bakassi. This area, a trust territory from German Cameroon, was administered as a part of the Eastern Region of Nigeria until it achieved autonomy in 1954, thus separating the Efik people politically. This separation was further extended when as a result of a 1961 plebiscite the area voted to join the Republic of Cameroon. Most of the area was immediately transferred, but it wasn't until August 2006 that Nigeria handed over the Bakassi peninsula to Cameroon.

The people of Uruan were said to have given them the name "Efik" deriving from a verb meaning to press or oppress, since they were alleged to be aggressive. 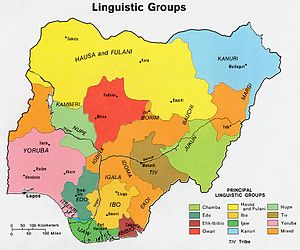 Ethno-linguistic groups in Nigeria. Efik-Ibibio in burgundy at bottom.
File:Efik USC2000 PHS.svg
The language spread of Efik in the United States according to U.S. Census 2000

The Efik people are found in the South-South geopolitical zone of Nigeria. Cook (1985, p. 1) has noted that they occupy “the South Eastern corner of the Cross River State.” According to Aye (2000, p.v), ” the people generally known as Efik and their kinsfolk today occupy the basins of the Lower Cross River and down to the Bakassi Peninsula, the Calabar River and down to its tributaries – the Kwa River, Akpayafe (Akpa Ikang) and the Eniong Creek.” Nair (1972) records that the Efik had occupied Calabar “towards the end of the seventeenth century or at the beginning of the 18th century.” He concludes, therefore, that Calabar is the homeland of the Efik. The Efik are related to the Annang, Ibibio, Oron, Biase, Akampkpa, Uruan, and Eket people by common ancestry.

Although the actual origins of the efik people are unknown, oral traditions provide accounts of their migration from Igbo and ibibio territory (to the north-west of Calabar) to the present location. There would seem to be three succesive stages in the history of efik migration and settlement: (a) an Igbo phase (b) an Ibibio phase and (c) the drift to the coast. They are some efik who advocate the "oriental" origins of their people, claiming that they were living in Palestine or Egypt and had crossed the Sahara to Sudan from where they wandered into Nigeria. This is believed to be elaborated in some of their peculiar burial sites and ceremonies.

Although their economy was originally based on fishing, the area quickly developed into a major trading centre and remained so well into the early 1900s. Incoming European goods were traded for slaves, palm oil and other palm products. The Efik kings collected a trading tax called comey from docking ships until the British replaced it with 'comey subsidies'.[1]

The Efik were the middle men between the white traders on the coast and the inland tribes of the Cross River and Calabar district. Christian missions were at work among the Efiks beginning in the middle of the 19th century. Even by 1900, many of the native peoples were well educated in European ideologies and culture, professed Christianity and dressed in European fashion.

A powerful bond of union among the Efik, and one that gives them considerable influence over other tribes, is the secret society known as the Ekpe, the inventor of the Nsibidi, an ancient African Writing.

The Efik and indeed the people of the Old Calabar kingdom were the first to embrace western education in present day Nigeria, with the establishment of Hope Waddel Training Institute, Calabar in 1895 and the Methodist Boys High School, Oron in 1905.

In 1884 the Efik kings and the chiefs of the Efik placed themselves under British protection. These treaties and attendant territorial economic rights, are documented in CAP 23 of Laws of Eastern Nigeria, captioned 'Comey subsidies law'.[1] The Efik king, also known as the Obong of Calabar, still (as of 2006) is a political power among the Efik.[2]

The Efik people speak the Efik language, which is a Benue–Congo language of the Cross River family. [3][4][5]