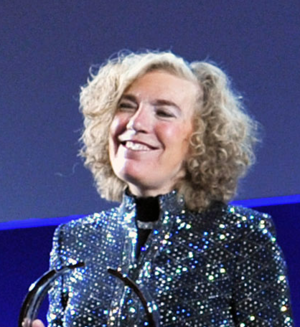 Elaine Fuchs (born 1940) is an American cell biologist, famous for her work on the biology and molecular mechanisms of mammalian skin and skin diseases, and has led the modernization of dermatology. Fuchs also pioneered reverse genetics approaches, which assess protein function first and then assesses its role in development and disease. In particular, Fuchs researches skin stem cells, and their production of hair and skin. As an HHMI investigator, she is currently the Rebecca C. Lancefield Professor of Mammalian Cell Biology and Development at Rockefeller University.

Fuchs grew up outside Chicago, in a family of scientists—her father, aunt, and sister were also scientists, and her family encouraged her to pursue higher education.[1]

Fuchs earned a B.S. in chemistry in 1972 from the University of Illinois, graduating with highest distinction in the Chemical Sciences. She began as one of only three women in an undergraduate physics class of 200. Fuchs was politically active during college, protesting the Vietnam War and applying to the Peace Corps. However, when she was assigned to Uganda, then under the dictatorship of Idi Amin, she elected to go directly to graduate school instead.[1]

Fuchs earned her Ph.D. in biochemistry from Princeton University, working with Charles Gilvarg. For her doctoral work, Fuchs studied changes in bacterial cell walls—the biosynthesis and assembly of the cell wall of bacillus megaterium.

Fuchs began her career-defining work on skin biology during her postdoctoral work with Howard Green at MIT. In Green's lab she studied the mechanisms underlying growth and differentiation in epidermal keratinocytes.

Fuchs accepted a faculty position at the University of Chicago in 1980, as the first woman in the biochemistry department. She was mentored and befriended by Janet Rowley and Susan Lindquist, and eventually they all joined the reorganized Department of Molecular Genetics and Cell Biology, in which Fuchs was ultimately appointed the Amgen Professor of Molecular Genetics and Cell Biology.

In 2002, Fuchs accepted a position at Rockefeller University, where she is currently the Rebecca C. Lancefield Professor of Mammalian Cell Biology and Development and the HHMI.

Fuchs is known for her support of women in science, and has stated that

Senior women who are recognized by their peers as being successful have a responsibility to help educate those scientists who haven't quite accepted this important message. And we have a responsibility to maintain the highest scientific and ethical standards and to serve as the best role models we can for the younger generation of outstanding scientists - both men and women - who are rising through the ranks. Leading by good example is still the best way to diffuse the now more subtle and less vocal, but nevertheless lingering, discrimination and dogmatism against women scientists within our scientific community."[1]

Fuchs has also continued her concern for social and ethical issues, remarking at 2000 commencement address at the University of Chicago:

I now balance the joy of discovery with the necessity of taking seriously ethical and educational concerns at the nexus of science and society today. Indeed, for the world of science to be a successful one, it must be a science of the world. It must be a science that embodies concern for the world of the next millennium. Your education has taught you to be morally and ethically responsible, and to bring philosophical reflection into your chosen profession, your community, and your life as a whole.[2]

Fuchs is married to a fellow academic, David Hansen. She currently sits on the board of the Damon Runyon Cancer Research Foundation. She was elected president of the American Society for Cell Biology in 2001.

Her Dickson Prize nominator said of Fuchs that "Her innovative reverse genetic approach and landmark discoveries in our understanding of the underlying bases for inherited human disorders and cancers places her in the top cadre of the most creative scientists worldwide." She is listed as one of the ISI's most highly cited researchers.[3]