From Infogalactic: the planetary knowledge core
Jump to: navigation, search
For other Pennsylvania townships of the same name, see Eldred Township, Pennsylvania (disambiguation).

Eldred Township is a township in Monroe County, Pennsylvania, United States. The population was 2,665 at the 2000 census.

According to the United States Census Bureau, the township has a total area of 24.3 square miles (63 km2), of which, 24.3 square miles (63 km2) of it is land and 0.04% is water. It is drained by the Aquashicola Creek and the Buckwha Creek westward into the Lehigh River. Blue Mountain forms its natural southern boundary. Its villages include Fiddletown, Kunkletown, and Smith Gap.

There were 941 households, out of which 33.6% had children under the age of 18 living with them, 63.1% were married couples living together, 7.4% had a female householder with no husband present, and 23.6% were non-families. 17.7% of all households were made up of individuals, and 7.2% had someone living alone who was 65 years of age or older. The average household size was 2.72 and the average family size was 3.08. 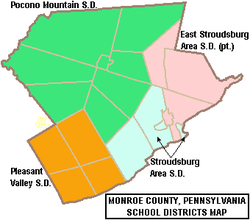 In 2014, the Pittsburgh Business Times ranked Pleasant Valley School District 285th out of 496 public schools for academic achievement of its pupils.[6]

Eldred Township residents may also apply to attend any of the Commonwealth's 14 public cyber charter schools (2013) at no additional cost to the parents. The resident’s public school district is required to pay the charter school tuition or the cyber charter school tuition for residents who attend these public schools.[9][10] By Commonwealth law, if the District provides transportation for its own students, then the District must provide transportation to any school that lies within 10 miles of its borders. Residents may also seek admission for their school aged child to any other public school district. When accepted for admission, the student's parents are responsible for paying an annual tuition fee set by the Pennsylvania Department of Education. For example, Stroudsburg Area School District's high school tuition rate was $12,655.36 in 2013 and Pocono Mountain School District was $13,988.42.[11]

Colonial Intermediate Unit #20 provides a wide variety of services to children living in its region which includes Eldred Township. Early screening, special education services, speech and hearing therapy, autistic support, preschool classes and many other services like driver education are available. Services for children during the preschool years are provided without cost to their families when the child is determined to meet eligibility requirements. Intermediate units receive taxpayer funding: through subsidies paid by member school districts; through direct charges to users for some services; through the successful application for state and federal competitive grants and through private grants.

East Stroudsburg University of Pennsylvania is a public university located in neighboring East Stroudsburg. It is one of the 14 state universities that make up the Pennsylvania State System of Higher Education (PASSHE). Eleventh and twelfth grade students may attend the University at a significant tuition discount through its Dual Enrollment program earning college credits while still earning their high school diploma. Additionally, Pennsylvania residents who are at least 60 years of age and retired may enroll as non-matriculating students tuition free.[12]

Community members also have access to the Eastern Monroe County Public Library [2] which is located on 1002 North 9th Street in Stroudsburg. Through it Pennsylvania residents have access to all POWER Library online resources. Chestnuthill Township residents may also use the Western Pocono Community Library situated in Brodheadsville.