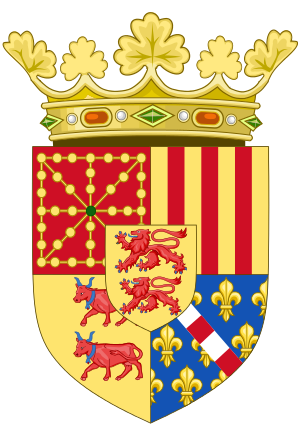 Coat of arms of Queen Eleanor

She was born in Olite, Navarre (now Spain), the third and youngest child of King John II of Aragon and Queen Blanche I of Navarre and the younger sister of Blanche II of Navarre.[3] She was born 2 February 1426, and was acclaimed by the Cortes in Pamplona, 9 August 1427, as the legitimate heir of Charles IV, and Blanche II in succession to their mother. After their mother's death, however, their father occupied Navarre.

She married Gaston IV, Count of Foix, in 1441.[4] In 1442, Eleanor moved with her spouse to Bearn. In 1455, her father deposed her brother and her sister as heirs of Navarre and proclaimed Eleanor as the heir and the regent and general governor of Navarre, and she moved to Sangüesa. She continued as regent after the death of her brother in 1461. In 1462, she signed the treaty of Olite, where she recognized her father as the monarch of Navarre and accepted to have her sister Blanche imprisoned under her care. In 1464, Blanche died in her care, suspected to have been poisoned. By the treaty, she was recognized by her father as the heir of Navarre and his regent (governor) in Navarre. In 1468, her father killed her advisor Nicolas de Chavarri, and deposed her as governor. In 1471, however, her father recognized her as the governor of Navarre until his death. At her father's death in 1479, she gave her oath as the monarch of Navarre, and died two weeks later, at Tudela, Navarre, aged 53.

In 1441, she married Gaston IV, count of Foix, and had the following children with him: