An electoral district (also known as a constituency, riding, ward, division, electoral area or electorate) is a territorial subdivision for electing members to a legislative body. Generally, only voters (constituents) who reside within the district are permitted to vote in an election held there. From a single district, a single member or multiple members might be chosen. Members might be chosen by a first past the post system or a proportional representative system, or another method entirely. Members might be chosen through an election with universal suffrage or an indirect election, or some other method. 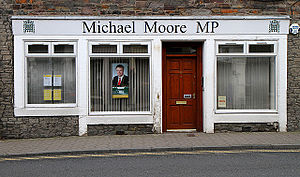 Representatives from electoral districts typically have offices in their respective districts. This photo shows the office of Michael Moore, a Member of Parliament (MP) in the UK.

Under proportional representation systems, district magnitude is an important determinant of the makeup of the elected body. With a larger number of winners candidates are able to represent proportionately smaller minorities; a 10% minority in a given district may secure no seats in a 5-member election but would be guaranteed a seat in a 9-member one because they fulfill a Droop quota.

The geographic distribution of minorities also affects their representation - an unpopular nationwide minority can still secure a seat if they are concentrated in a particular district. District magnitude can sometimes vary within the same system during an election. In the Republic of Ireland, for instance, national elections to Dáil Éireann are held using a combination of 3, 4, and 5 member districts. In Hong Kong, the magnitude ranged from 3 to 5 in 1998, when the current electoral system was introduced for Legislative Council geographical constituency elections, and will range from 5 to 9 in the forthcoming election in September 2012.

Apportionment is generally done on the basis of population. Seats in the United States House of Representatives, for instance, are reapportioned to individual states every 10 years following a census, with some states that have grown in population gaining seats. The United States Senate, by contrast, is apportioned without regard to population; every state gets exactly two senators. Malapportionment occurs when voters are under- or over-represented due to variation in district population.

Given the complexity of this process, software is increasingly used to simplify the task, while better supporting reproducible and more justifiable results.

However, any possible gerrymandering that theoretically could occur would be much less effective because minority groups can still elect at least one representative if they make up a significant percentage of the population (e.g. 20-25%). Compare this to single-member districts where 40-49% of the voters can be essentially shut out from any representation.

Sometimes, particularly under non-proportional winner-take-all voting systems, electoral districts can be prone to landslide victories. A safe seat is one that is very unlikely to be won by a rival politician due to the makeup of its constituency. Conversely, a swing seat is one that could easily swing either way. In United Kingdom general elections and United States presidential and congressional elections, the voting in a relatively small number of swing seats usually determines the outcome of the entire election. Many politicians aspire to have safe seats. In large multi-party systems like India, swing seats can lead to a Hung assembly like situation if a significant number of seats go for regional parties instead of the larger national parties who are the main competitors at the national or state level, as was the situation in the Lok Sabha (Lower house of The Parliament of India) during the decade of the 1990s.

Elected representatives may spend much of the time serving the needs or demands of individual constituents, meaning either voters or residents of their district. This is more common in assemblies with many single-member or small districts than those with fewer, larger districts. In a looser sense, corporations and other such organizations can be referred to as constituents, if they have a significant presence in an area.

Many assemblies allow free postage (through franking privilege or prepaid envelopes) from a representative to a constituent, and often free telecommunications. Caseworkers may be employed by representatives to assist constituents with problems. Members of the U.S. Congress (both Representatives and Senators) working in Washington, D.C. have a governmentally staffed district office to aid in "constituent services". Many state legislatures have followed suit. Likewise, British MPs use their Parliamentary staffing allowance to appoint staff for "constituency casework". Client politics and pork barrel politics are associated with constituency work.

In some elected assemblies, some or all constituencies may group voters based on some criterion other than, or in addition to, the location they live. Examples include:

Not all democratic political systems use separate districts to conduct elections. Israel, for instance, conducts parliamentary elections as a single district, while the 26 electoral districts in Italy and the 20 in the Netherlands have a role in the actual election, but no role whatever in the division of the seats. Ukraine elected half of the Verkhovna Rada (the Ukrainian Parliament) in this way in the elections in October 2012.[2]