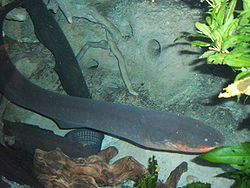 Strongly electric fish are fish with an EOD that is powerful enough to stun prey. Typical examples are the electric eel, the electric catfishes, and electric rays. The amplitude of the signal can range from 10 to 600 Volts with a current of up to 1 Ampere, according to the surroundings, for example different conductances of salt and fresh water. To maximize the power delivered to the surroundings, the impedances of the electric organ and the water must be matched:

The elephantnose fish is a weakly electric fish which generates an electric field with its electric organ and then processes the returns from its electroreceptors to locate nearby objects.[5]

Weakly electric fish generate a discharge that is typically less than one volt in amplitude. These are too weak to stun prey and instead are used for navigation, object detection (electrolocation) and communication with other electric fish (electrocommunication). Two of the best-known and most-studied examples are Peters' elephantnose fish (Gnathonemus petersi) and the black ghost knifefish (Apteronotus albifrons). The males of the nocturnal Brachyhypopomus pinnicaudatus, a toothless fish native to the Amazon basin, give off big, long electric hums to attract a mate.[6]

The EOD waveform takes two general forms depending on the species. In some species the waveform is continuous and almost sinusoidal (for example the genera Apteronotus, Eigenmannia and Gymnarchus) and these are said to have a wave-type EOD. In other species, the EOD waveform consists of brief pulses separated by longer gaps (for example Gnathonemus, Gymnotus, Raja) and these are said to have a pulse-type EOD.

It had been theorized as early as the 1950s that electric fish near each other might experience some type of interference or inability to segregate their own signal from those of neighbors. This issue does not arise, however, because the electric fish adjust to avoid frequency interference. In 1963, two scientists, Akira Watanabe and Kimihisa Takeda, discovered the behavior of the jamming avoidance response in the knifefish Eigenmannia sp. In collaboration with T.H. Bullock and colleagues, the behavior was further developed.Bullock, Theodore Holmes; Heiligenberg, Walter, eds. (1986). Electroreception. Wiley.<templatestyles src="Module:Citation/CS1/styles.css"></templatestyles> Finally, the work of Walter Heiligenberg expanded it into a full neuroethology study by examining the series of neural connections that led to the behavior.[7] Eigenmannia is a weakly electric fish that can self-generate electric discharges through electrocytes in its tail. Furthermore, it has the ability to electrolocate by analyzing the perturbations in its electric field. However when the frequency of a neighboring fish’s current is very close (less than 20 Hz difference) to that of its own, the fish will avoid having their signals interfere through a behavior known as Jamming Avoidance Response. If the neighbor’s frequency is higher than the fish’s discharge frequency, the fish will lower its frequency, and vice versa. The sign of the frequency difference is determined by analyzing the "beat" pattern of the incoming interference which consists of the combination of the two fish’s discharge patterns.[7]

Neuroethologists performed several experiments under Eigenmannia's natural conditions to study how it determined the sign of the frequency difference. They manipulated the fish’s discharge by injecting it with curare which prevented its natural electric organ from discharging. Then, an electrode was placed in its mouth and another was placed at the tip of its tail. Likewise, the neighboring fish’s electric field was mimicked using another set of electrodes. This experiment allowed neuroethologists to manipulate different discharge frequencies and observe the fish’s behavior. From the results, they were able to conclude that the electric field frequency, rather than an internal frequency measure, was used as a reference. This experiment is significant in that not only does it reveal a crucial neural mechanism underlying the behavior but also demonstrates the value neuroethologists place on studying animals in their natural habitats.[7]

Following is a table of all known electric fish species within fresh water. There are two groups of marine fishes, the electric rays (Torpediniformes: Narcinidae and Torpedinidae) and the stargazers (Perciformes: Uranoscopidae) capable of generating strong electric pulses.