Electricity sector in the United Kingdom 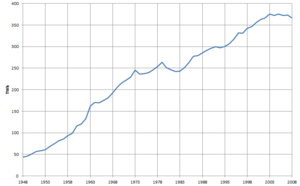 The electricity sector in the United Kingdom relies mainly on fossil fuelled power and 15-20% in nuclear power. The use of electricity declined 11% in 2009 compared to 2004 and respectively the renewable energy per cent share of total electricity use increased 2.8%. The annual use of electricity declined 736 kWh per person in 2009 compared to 2004. In 2008 nuclear electricity production was 860 kWh pro person. In 2014, 28.1 TW·h of energy was generated by wind power, which contributed 9.3% of the UK's electricity requirement.[2] The United Kingdom voluntarily ended the use of incandescent lightbulbs in 2011. The UK is planning to reform its Electricity Market. It plans to introduce a capacity mechanism and contracts for difference to encourage the building of new generation.

The European Commission banned low efficiency general-purpose, non-directional incandescent lightbulbs from 2012, though similarly shaped higher-efficiency halogen bulbs continue to be available (although halogen cannot be considered high-efficiency when compared to Compact fluorescent lamp and LED bulbs). The United Kingdom banned them voluntarily from 2011 after Ireland in 2009.

Electricity per person and by power source 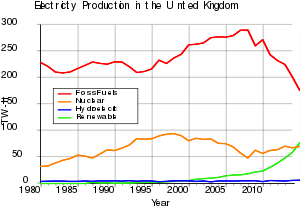 Electricity production by year, by source

According to Imperial College Britain could have 40% of electricity from solar power in sunny days by 2020 in 10 million homes compared to a half a million homes in start of 2014. If a third of households would generate solar energy it could equal 6% of British total electricity consumption.[10] 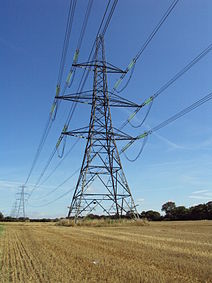 The National Grid is the high-voltage electric power transmission network in Great Britain, connecting power stations and major substations and ensuring that electricity generated anywhere in England, Scotland and Wales can be used to satisfy demand elsewhere. There are also undersea interconnections to northern France (HVDC Cross-Channel), Northern Ireland (HVDC Moyle), the Isle of Man (Isle of Man to England Interconnector), the Netherlands (BritNed) and the Republic of Ireland (EirGrid).

On the breakup of the Central Electricity Generating Board in 1990, the ownership and operation of the National Grid in England and Wales passed to National Grid Company plc, later to become National Grid Transco, and now National Grid plc. In Scotland the grid split into two separate entities, one for southern and central Scotland and the other for northern Scotland, connected by interconnectors to each other. The first is owned and maintained by SP Energy Networks, a subsidiary of Scottish Power, and the other by SSE. However, National Grid plc remains the System Operator for the whole UK Grid.

The UK grid is connected to adjacent European and Irish electrical grids by submarine power cables, including for links to northern France (HVDC Cross-Channel), Northern Ireland (HVDC Moyle), Republic of Ireland (East–West Interconnector), the Isle of Man (Isle of Man to England Interconnector), and the Netherlands (BritNed). There are also plans to lay cables to link the UK with Iceland and Norway (Scotland–Norway interconnector) in the future.

In the UK, an electricity supplier is a retailer of electricity. For each supply point the supplier has to pay the various costs of transmission, distribution, meter operation, data collection, tax etc. The supplier then adds in energy costs and the supplier's own charge.