Elihu Root (/ˈɛlᵻhjuː ˈruːt/; February 15, 1845 – February 7, 1937) was an American lawyer and statesman who served as the Secretary of War (1899–1904) under two presidents, including President Theodore Roosevelt. He moved frequently between high-level appointed government positions in Washington, D.C. and private-sector legal practice in New York City. For that reason, he is sometimes considered to be the prototype of the 20th century political "wise man," advising presidents on a range of foreign and domestic issues. He was elected by the state legislature as a U.S. Senator from New York and served one term, 1909–1915. Root was awarded the Nobel Peace Prize in 1912.

Root was a leading lawyer, whose clients included major corporations and such powerful players as Andrew Carnegie. Root served as president or chairman of the Carnegie Endowment for International Peace, the Carnegie Institution of Washington, and the Carnegie Corporation of New York. As Secretary of War under McKinley and Roosevelt, Root designed American policies for the new colonial possessions, especially the Philippines and Cuba. His role in suppressing a Filipino revolt angered anti-imperialist activists at home. Root favored a paternalistic approach to colonial administration, emphasizing technology, engineering, and disinterested public service, as exemplified by the ethical standards of the Progressive Era. He helped design the Foraker Act of 1900, the Philippine Organic Act (1902), and the Platt Amendment of 1901, which authorized American intervention in Cuba in the future if needed to maintain a stable government. He was a strong advocate of what became the Panama Canal, and he championed the Open Door to expand world trade with China.[1]

Root was the leading modernizer in the history of the War Department, transforming the Army from a motley collection of small frontier outposts and coastal defense units into a modern, professionally organized, military machine comparable to the best in Europe. He restructured the National Guard into an effective reserve, and created the Army War College for the advanced study of military doctrine and most important set up a general staff. As Secretary of State under Theodore Roosevelt, Root modernized the consular service by minimizing patronage, promoted friendly relations with Latin America, and resolved frictions with Japan over the immigration of unskilled workers to the West Coast. He negotiated 24 bilateral treaties that committed the United States and other signatories to use arbitration to resolve disputes, which led to the creation of the Permanent Court of International Justice.[2][3] In the United States Senate, Root was part of the conservative Republican support network for President William Howard Taft. He played a central role at the Republican National Convention in 1912 in getting Taft renominated. By 1916–17, he was a leading proponent of preparedness, with the expectation the United States would enter World War I. President Woodrow Wilson sent him to Russia in 1917 in an unsuccessful effort to establish an alliance with the new revolutionary government that had replaced the czar.[4] Root supported Wilson's vision of the League of Nations, but with reservations along the lines proposed by Republican Senator Henry Cabot Lodge.

Elihu Root was born in Clinton, New York, to Oren Root and Nancy Whitney Buttrick, both of English descent.[5] His father was professor of mathematics at Hamilton College. After studying at local schools, including Williston Seminary, where he was a classmate of G. Stanley Hall, Elihu enrolled in college at Hamilton. He joined the Sigma Phi Society and was elected to the Phi Beta Kappa Society[6] After graduation, Root was an instructor of physical education for two years at Williston Seminary, and taught for one year at the Rome (N.Y.) Free Academy.

Despite his parents' encouragement to become a Presbyterian minister, Root went to New York City to attend New York University School of Law,[7] from which he graduated in 1867. His brother Oren then became a minister and followed in their father's footsteps as Mathematics professor at Hamilton.[8]

After admission to the New York bar, Root went into private practice as a lawyer. While mainly focusing on corporate law, Root was a junior defense counsel for William "Boss" Tweed during his corruption trial. Among Root's prominent and wealthy private clients were Jay Gould, Chester A. Arthur, Charles Anderson Dana, William C. Whitney, Thomas Fortune Ryan, and E. H. Harriman. Root was among the friends who were present when Arthur was informed that James A. Garfield has died, and that Arthur had succeeded to the presidency.[9] He served as the United States Attorney for the Southern District of New York from March 12, 1883 to July 6, 1885.[10]

After getting established, in 1878 at the age of 33, Root married Clara Frances Wales (died in 1928). She was the daughter of Salem Wales, the managing editor of Scientific American. They had three children: Edith (who married Ulysses S. Grant III), Elihu, Jr. (who became a lawyer), and Edward Wales Root (who became Professor of Art at Hamilton College).

U.S Attorney and Secretary of War

Root received his first political appointment from President Chester A. Arthur, when he was named as the U.S. Attorney for the Southern District of New York.

Under presidents William McKinley and Theodore Roosevelt, Root served as the United States Secretary of War 1899–1904. He reformed the organization of the War Department. He enlarged West Point and established the U.S. Army War College, as well as the General Staff. He changed the procedures for promotions and organized schools for the special branches of the service. He also devised the principle of rotating officers from staff to line. Root was concerned about the new territories acquired after the Spanish–American War. He worked out the procedures for turning Cuba over to the Cubans, ensured a charter of government for the Philippines, and eliminated tariffs on goods imported to the United States from Puerto Rico. When the Anti-Imperialist League attacked American policies in the Philippines, Root defended the policies and counterattacked the critics, saying they prolonged the insurgency.[11] During the summer of 1902, Root visited Europe, including France and Germany.[12] Root left the cabinet in 1904 and returned to private practice as a lawyer. 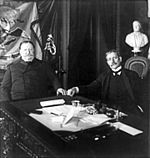 Root with William Howard Taft in 1904.

In 1905, President Roosevelt named Root as the United States Secretary of State after the death of John Hay. As secretary, Root placed the consular service under the civil service. He maintained the Open Door Policy in the Far East.

On a tour to Latin America in 1906, Root persuaded those governments to participate in the Hague Peace Conference. He worked with Japan to limit emigration to the United States and on dealings with China. He established the Root–Takahira Agreement, which limited Japanese and American naval fortifications in the Pacific. He worked with Great Britain in arbitration of issues between the United States and Canada on the Alaska boundary dispute, and competition in the North Atlantic fisheries. He supported arbitration in resolving international disputes.

During and after his Senate service, Root served as President of the Carnegie Endowment for International Peace, from 1910 to 1925.

In a 1910 letter published by the New York Times, Root supported the proposed income tax amendment, which was ratified as the Sixteenth Amendment to the United States Constitution:

It is said that a very large part of any income tax under the amendment would be paid by citizens of New York....

The reason why the citizens of New York will pay so large a part of the tax is New York City is the chief financial and commercial centre of a great country with vast resources and industrial activity. For many years Americans engaged in developing the wealth of all parts of the country have been going to New York to secure capital and market their securities and to buy their supplies. Thousands of men who have amassed fortunes in all sorts of enterprises in other states have gone to New York to live because they like the life of the city or because their distant enterprises require representation at the financial centre. The incomes of New York are in a great measure derived from the country at large. A continual stream of wealth sets toward the great city from the mines and manufactories and railroads outside of New York.[13]

Professor Alfred McCoy argues that Root was the first "foreign policy grandmaster" in American history, and that Root more than any other figure is responsible for transforming America into a world power. According to McCoy, Root devoted his time as Secretary of State and as a Senator to ensuring that the United States would have a consistent presence in world affairs, and Root helped to establish the Special Relationship between the United States and Great Britain. Root helped to ensure that powerful business interests and the intellectual elite supported an interventionist foreign policy.[14]

In 1912, as a result of his work to bring nations together through arbitration and cooperation, Root received the Nobel Peace Prize. 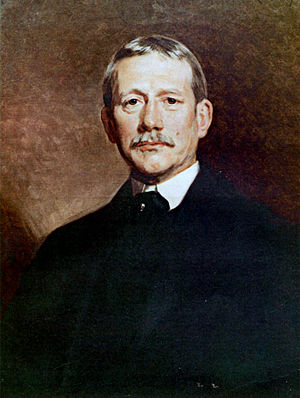 At the outbreak of World War I, Root opposed President Woodrow Wilson's policy of neutrality. Root promoted the Preparedness Movement to get the United States ready for actual participation in the war. He was a leading advocate of American entry into the war on the side of the British and French, because he feared the militarism of Germany would be bad for the world and bad for the United States.

In June 1917, at age 72, Root went to Russia, which had just overthrown the czar. He headed a mission sent by President Wilson, the Root Commission, to arrange American co-operation with the new revolutionary government. Root remained in Petrograd for close to a month, and was not much impressed by what he saw. American financial aid to the new regime was possible only if the Russians would fight on the Allied side. The Russians, he said, "are sincerely, kindly, good people but confused and dazed." He summed up the Provisional Government very trenchantly: "No fight, no loans."[16]

Root was the founding chairman of the Council on Foreign Relations, established in 1918 in New York.

In the Senate fight in 1919 over American membership in the League of Nations, Root supported Lodge's proposal of membership with certain reservations that allowed the United States government to decide whether or not it would go to war. The US never joined, but Root supported the League of Nations and served on the commission of jurists, which created the Permanent Court of International Justice. In 1922, when Root was 77, President Warren G. Harding appointed him as a delegate of an American team headed by Secretary of State Charles Evans Hughes. They participated in the Washington Naval Conference (International Conference on the Limitation of Armaments).[17] 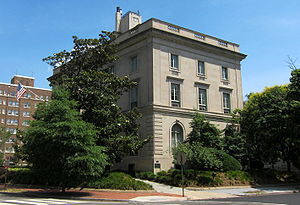 In addition to receiving the Nobel Prize, Root was awarded the Grand Cross of the Order of the Crown (from Belgium) and the Grand Commander of the Order of George I (from Greece). Root joined the Empire State Society of the Sons of the American Revolution in 1895, based on his descent from Elihu Root (1772–1843), and was the second cousin twice removed of publisher Henry Luce. Root was the last surviving member of the McKinley Cabinet.

Root died in 1937 in New York City, with his family by his side. His son, Elihu Root, Jr., like his father graduated from Hamilton College and became an attorney (as well as married the daughter of Hamilton's president, M. Woolsey Stryker).[19] His daughter Edith married Ulysses S. Grant III. A simple service was held in Clinton, led by Episcopal bishop E.H. Coley of the Episcopal Diocese of Central New York.[20] Root is buried along with his wife Clara (who died in 1928) at the Hamilton College Cemetery.[21]

Root's home in Clinton, which he purchased in 1893, became known as the Elihu Root House, and was declared a National Historic Landmark in 1972. The United States Army Reserve Base in New York Mills, New York bears his name. 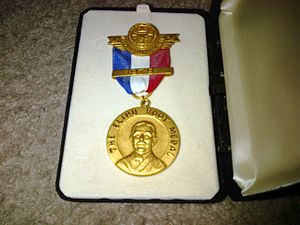 The Elihu Root Gold Medal is awarded to the six highest scoring civilian competitors in the National Trophy Rifle Team Match and are subsequently named as team members. The captain and coach of the highest-scoring civilian team are named as the coach and captain of the team. All eight members receive Elihu Root gold medals.