From Infogalactic: the planetary knowledge core
Jump to: navigation, search
This article is about the prophet. For others with the same given name, see Elisha (given name).
Not to be confused with Elishah or Elijah.

Elisha (/ᵻˈlaɪʃə/;[1] Hebrew: אֱלִישָׁע, Modern Elisha, Tiberian ʼĔlîšāʻ ; "My God is salvation", Greek: Ἐλισσαῖος, Elissaîos or Ἐλισαιέ, Elisaié, Arabic: اليسع Al-yasaʻ) is a prophet and a wonder-worker mentioned in the Hebrew Bible, the New Testament, the Quran, the Ginza Rba and Bahá'í writings.[2] His name is commonly transliterated into English as Elisha via Hebrew, Eliseus via Greek and Latin, or Alyasa via Arabic, Elyesa via Turkish. He was a disciple of Elijah and, after Elijah was taken up into the whirlwind, Elisha was accepted as the leader of the sons of the prophets. 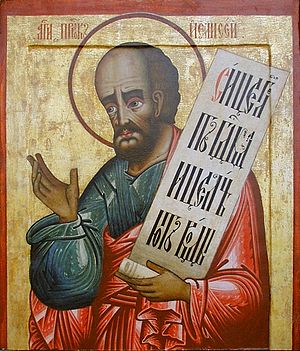 Elisha's story is related in the Book of Kings (in Judaism, part of the Nevi'im and in Christianity part of the historical books of the Old Testament). He was a prophet and a wonder-worker of the Northern Kingdom of Israel who was active during the reign of Joram, Jehu, Jehoahaz, and Jehoash (Joash).[3] Elisha was the son of Shaphat, a wealthy land-owner of Abel-meholah; he became the attendant and disciple of Elijah.[4]

His name first occurs in the command given to Elijah to anoint him as his successor. After learning in the cave on Mount Horeb, that Elisha, the son of Shaphat, had been selected by Yahweh as his successor in the prophetic office, Elijah set out to find him. On his way from Sinai to Damascus, Elijah found Elisha "one of them that were ploughing with twelve yoke of oxen". Elisha delayed only long enough to kill the yoke of oxen, whose flesh he boiled with the wood of his plough. He went over to him, threw his mantle over Elisha's shoulders, and at once adopted him as a son, investing him with the prophetic office.[4] Elisha accepted this call about four years before the death of Israel's King Ahab. For the next seven or eight years Elisha became Elijah's close attendant until Elijah was taken up into heaven. During all these years we hear nothing of Elisha except in connection with the closing scenes of Elijah's life.

After he had shared this farewell repast with his father, mother, and friends, the newly chosen prophet "went after Elijah, and ministered unto him."[5] He went with his master from Gilgal to Bethel, to Jericho, and thence to the eastern side of the Jordan, the waters of which, touched by the mantle, divided, so as to permit both to pass over on dry ground. Elisha then was separated from Elijah by a fiery chariot, and Elijah was taken up by a whirlwind into Heaven.

Before Elijah was taken up into the whirlwind, Elisha asked to "inherit a double-portion" of Elijah's spirit. Some scholars see this as indicative of the property inheritance customs of the time, where the oldest son received twice as much of the father's inheritance as each of the younger sons. In this interpretation Elisha is asking that he may be seen as the "rightful heir" and successor to Elijah.[6] Critics of this view point out that Elisha was already appointed as Elijah's successor earlier in the narrative and that Elisha is described as performing twice as many miracles as Elijah. In this interpretation the "double-portion" isn't merely an allusion to primacy in succession, but is instead a request for greater prophetic power even than Elijah.[7]

By means of the mantle let fall from Elijah, Elisha miraculously recrossed the Jordan, and Elisha returned to Jericho, where he won the gratitude of the people by purifying the unwholesome waters of their spring and making them drinkable.[8] 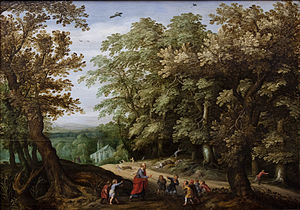 The Prophet Elisha curses the children who mocked him, by Willem van den Bundel

Before he settled in Samaria, Elisha passed some time on Mount Carmel.[9] When the armies of Judah, Israel and Edom, then allied against Mesha, the Moabite king, were being tortured by drought in the Idumean desert, Elisha consented to intervene. His double prediction regarding relief from drought and victory over the Moabites was fulfilled on the following morning.[4] When a group of boys (or youths[10]) from Bethel taunted the prophet for his baldness, Elisha cursed them in the name of Yahweh and two female bears came out of the forest and tore forty-two of the boys.[9]

He became noted in Israel, and for six decades (892–832 B.C.) held the office of "prophet in Israel". He is termed a patriot, as he was involved in helping soldiers and kings.[3] 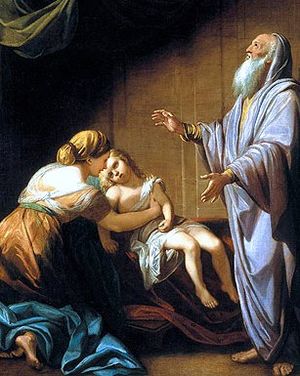 Elisha raises son of the woman of Shunem, by Benjamin West, 1765

To relieve the widow importuned by a hard creditor, Elisha so multiplied a little oil as to enable her, not only to pay her debt, but to provide for her family needs. To reward the rich lady of Shunem for her hospitality, he obtained for her from Yahweh, at first the birth of a son, and subsequently the resurrection of her child, who had died. To nourish the sons of the prophets pressed by famine, Elisha changed into wholesome food the pottage made from poisonous gourds.[8] 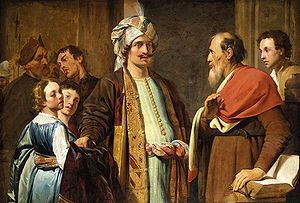 Elisha refusing the gifts of Naaman, by Pieter de Grebber 1630

Elisha cured the Syrian military commander Naaman of leprosy but punished his own servant Gehazi, who took money from Naaman.[11] Naaman, at first reluctant, obeyed Elisha, and washed seven times in the Jordan. Finding his flesh "restored like the flesh of a little child", the general was so impressed by this evidence of God's power, and by the disinterestedness of His Prophet, as to express his deep conviction that "there is no other God in all the earth, but only in Israel". In the Christian tradition, Jesus referred to this event when he said, "And there were many lepers in Israel in the time of Elisha the prophet: and none of them was cleansed but Naaman the Syrian".[12]

Elisha's public political actions included repeatedly saving King Jehoram of Israel from the ambushes planned by Benhadad,[9] ordering the elders to shut the door against the messenger of Israel's ungrateful king,[13] bewildering with a strange blindness the soldiers of the Syrian king,[14] making iron float to relieve from embarrassment a son of a prophet,[15] confidently predicting the sudden flight of the enemy and the consequent cessation of the famine,[16] and unmasking the treachery of Hazael.[17]

Other miracles Elisha accomplishes include multiplying the twenty loaves of new barley into a sufficient supply for a hundred men, and for a disciple of the schools of the prophets, he recovers an axe fallen into the waters of the Jordan.[8] He administered the miracle at Dothan, half-way on the road between Samaria and Jezreel, and at the siege of Samaria by the king of Syria, Elisha prophesied about the terrible sufferings of the people of Samaria and their eventual relief.[18]

Elisha then journeyed to Damascus and prophesied that Hazael would be king over Syria;[17] thereafter he directs one of the sons of the prophets to anoint Jehu, the son of Jehoshaphat, king of Israel, in place of Ahab. Mindful of the order given to Elijah, Elisha delegated a son of one of the prophets to quietly anoint Jehu King of Israel, and to commission him to cut off the house of Ahab.[19] The death of Jehoram, pierced by an arrow from Jehu's bow, the ignominious end of Jezebel, the slaughter of Ahab's seventy sons, proved how faithfully executed was the Divine command.[20] After predicting to Jehoash his victory over the Syrians at Aphek, as well as three other subsequent victories, ever bold before kings, ever kindly towards the lowly, "Elisha died, and they buried him".[21] 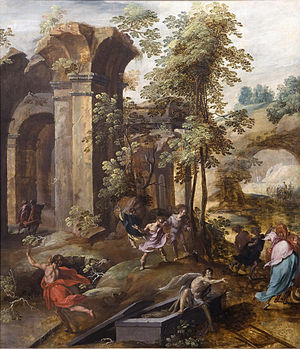 While Elisha lay on his death-bed in his own house,[22] Jehoash, the grandson of Jehu, came to mourn over his approaching departure, and uttered the same words as those of Elisha when Elijah was taken away, indicating his value to him: "My father, my father! the chariot of Israel, and the horsemen thereof."

The touch of his corpse served to resuscitate a dead man. A year after Elisha's death and burial a body was placed in his grave. As soon as the body touched Elisha's remains the man "revived, and stood up on his feet".[23] It has been said, that this dead man was Shallum (son of Tikvah), keeper of the temple-wardrobe in the reign of Josiah[24] and husband of Huldah the prophetess.

He is venerated as a saint in a number of Christian Churches. His feast day is on June 14, on the Eastern Orthodox, and Eastern Catholic liturgical calendars (for those churches which use the traditional Julian calendar, June 14 falls on June 27 of the modern Gregorian calendar). John of Damascus composed a canon in honor of Elisha, and a church was built at Constantinople in his honor.

In Western Christianity he is commemorated on the Carmelites, a Catholic religious order, calendar of saints.[25] He is also commemorated as a prophet on the Calendar of Saints of the Lutheran Church–Missouri Synod. Both calendars also celebrate him on June 14. Both the Orthodox and Roman Catholics believe that he was unmarried and celibate.[26]

Julian the Apostate (361–363) gave orders to burn the relics of the prophets Elisha, Obadiah and John the Baptist, who were buried next to each other in Sebastia,[27] but they were rescued by the Christians, and part of them were transferred to Alexandria.[11] Today, the relics of Elisha are claimed to be among the possessions of the Coptic Orthodox Monastery of Saint Macarius the Great in Scetes, Egypt.[28]

Elisha (Arabic: Alyasa' اليسع) is also considered an Islamic prophet and is seen by Muslims to be the prophetic successor to Elijah (Ilyas). Elisha is mentioned twice in the Quran as a prophet, and is mentioned both times alongside fellow prophets:

And commemorate Ishmael, Elisha, and Ezekiel: Each of them was of the Company of the Good.

And Ishmael and Elisha and Jonas and Lot: and to all We gave favour above the nations:
(To them) and to their fathers, and progeny and brethren: We chose them, and we guided them to a straight way.

Ibn Kathir traces Elisha's genealogy through his father, in Islamic tradition named Ukhtub, back to the lineage of Aaron.[31] In the various Stories of the Prophets compilations in Islamic literature, Elisha's story is often grouped with that of his contemporary Elijah. The historian Hasan of Basra said:

Elisha came after Elias, peace be upon them. He called his people to the way of God and followed the laws and Shariah revealed to Elias, till he passed away.[32]

Muslims believe that Elijah was directed by God to appoint Elisha as the succeeding prophet before vanishing into the protection of God.[33] The narrative of Elisha in Muslim tradition is similar to that in the Hebrew Bible. Muslim scholars believe that Elisha prophesied through the reign of four kings: Joram, Jehu, Jehoahaz, and Jehoash[34] but that Israel refused to hear his words.[35]

Some Muslims believe the tomb of Elisha is in Al-Awjam in the eastern region of Saudi Arabia. The shrine was removed by the Government[when?] because such veneration is not in accordance with Wahhabi or Salafi Islam.[36][37] It had been an important landmark for many centuries during and before the Sunni Ottoman dominance of the Middle-East. It had been a destination for pilgrims.[38]

A shrine of Elisha is present in the Eğil district of Diyarbakir Province, Turkey.[39]